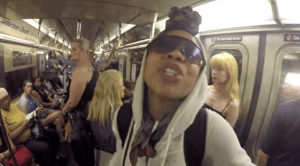 Broadway star Brandy Norwood performed on the subway — and got a pretty lackluster reception. (YouTube)

NEW YORK – Singer Brandy Norwood went undercover in a post-workout hoodie to see what New Yorkers think of her music on the subway – and got an awkwardly-chilly reception.

“Recently, Frank Silent and I took a little subway ride after I’d left the gym,” she wrote on her blog Monday. “Frank, his camera, and I always equal a good time. I decided to hit the subway and sing my little heart out.”

Brandy belted out a song for the camera, perhaps expecting applause, and got nothing but stony, silence from the unimpressed straphangers.

“What ya’ll thought of that?” she asked the packed train.  “Ya’ll think that was cool?”

As everyone focused on their iPhone screens or just stared straight ahead, Brandy asked, “Hello?  Nobody heard me singing?  Nobody cares? Ok.”

“I just gave that my all and ain’t nobody said nothing!  People in New York are so rude, like, oh my god,” Brandy said into the camera in faux anger.  “Like, I just sang from the heart.”

Pretending to be crushed, Brandy took off her glasses and said, “Nobody on the train responded.  I feel very emotional right now.  I’m calling my mom.”

Trying to get at least one reaction to her song, Brandy turned to the man closest to her and got an important lesson about performing on the subway.

“You’re too much into yourself,” he said. “There’s a whole city ready to embrace you but you’ve got to go out and engage with people.  We’ve seen this a million times, you’ve gotta do something different.”

“Don’t be scared, you’ve got talent man, go for it!” the man encouraged.

Norwood, 36, moved to New York City in April and is currently starring as Roxie Hart in “Chicago The Musical” on Broadway.

“I’ve hung out in Central Park, Times Square, ridden the bus, and I’ve gotten accustomed to taking the subway too,” she wrote on her blog.  “I feel like a real New Yorker. I’m learning the streets and everything, y’all!”

Brandy seemed to take her subway performance in stride however, writing, “Okay, I’ve got one fan on the subway, one guy said he liked the performance.”

TRENTON, N.J. — Gas prices fell further in New Jersey but remained steady around the nation at large as an increase in total domestic gasoline stocks helped stem an increase in demand.

AAA Mid-Atlantic says the average price of a gallon of regular gas in New Jersey on Friday was $2.86, down four cents from a week ago.

NEW YORK (AP) — Amid mounting anger over allegations of bullying, Broadway and Hollywood producer Scott Rudin broke his silence Saturday, saying he is “profoundly sorry” and will step back from his theater work.

“After a period of reflection, I’ve made the decision to step back from active participation on our Broadway productions, effective immediately. My roles will be filled by others from the Broadway community and in a number of cases, from the roster of participants already in place on those shows," Rudin said in a statement.