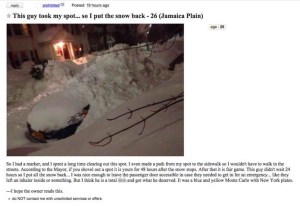 BOSTON (PIX11) – Brutal winters mean back-breaking shoveling for car owners trying to free vehicles from their snowy confines — and another chapter in the winter war over parking spot rights.

In Boston, residents are permitted to use space savers for up to 48 hours after a snow emergency has been declared — a rule apparently ignored by the owner of the car pictured in this Craigslist post.  Although it has since been deleted (out of fear of retribution), the author of “This guy took my spot . . . so I put the snow back,” told Boston.com he painstakingly cleared the snow from his car so he could go on his shift as an Uber driver.

He said he put an old bookshelf in the spot to hold his place, but when he got back late Sunday night he found a car “with New York plates” parked there instead.  After stewing for a day, he decided to do a little shoveling Monday night, burying the blue and yellow Monte Carlo under the piles of snow and ice he had already cleared.

“I was nice enough to leave the passenger door accessible in case they needed to get in for an emergency . . . like they left an inhaler inside or something,” he wrote.  He said others emailed him before he deleted the post (out of fear of retribution) saying that he should have slashed the cars tires, but “I didn’t think that was okay,” he added.

In a Saturday speech at his Mar-a-Lago Club in Palm Beach, Florida, Trump ripped into McConnell, who was Senate majority leader during his presidency, according to Washington Post.

LINCOLNTON, N.C. (WJZY)- In downtown Lincolnton, two blocks from Main Street, in a building that once housed the local Free Masons, a sharp secret was hidden in plain sight.

When Dr. Ashley Oliphant and her mother, Beth Yarbrough, asked to see an old sword that used to hang on a wall, they unlocked a mystery two centuries in the making.

The Centers for Disease Control and Prevention is tracking vaccine side effects through a mobile app. V-safe is a tool that can be accessed using a smartphone and allows users to track their health after getting the vaccine and communicate any side effects to the CDC. Anyone who has been vaccinated within the last six weeks can participate, according to CDC.

NY boy with rare, 1 in 10 million disease gets the ride of a lifetime

Yonkers mayor remembers DMX: ‘At every opportunity gave back to Yonkers’

Community responding to return of dangerous synthetic drug in Harlem

Trump: The key to Republican success is more Trumpism

New ‘double mutant’ COVID strain has potential to cause chaos