NEW YORK — The so-called “bomb cyclone” winter storm is approaching the New York area, promising over a foot of snow in places on Thursday and blizzard conditions as a system that has been likened to a winter hurricane heads up the coast.

New York City Public Schools were closed on Thursday “due to expected severe weather conditions,” and dozens of other school districts have also decided to close ahead of the monster storm. [See school closings list here.]

The snow, along with strong winds that could whip up white-out conditions, should start falling late Wednesday or early Thursday morning and not relent until Thursday evening, followed by the most extreme cold temperatures since the arctic outbreak began on Christmas.

Suffolk County  and most of coastal New Jersey is now under a blizzard warning, and a winter storm warning has been issued for New York City and parts of interior New Jersey.

There are still uncertainties in the forecast, as the storm could shift 25 to 50 miles from its current track – and that movement would greatly affect how much snow falls.

The most likely scenario, as of Wednesday evening, calls for 4 to 7 inches for most of the city, the nearby northern suburbs and most of Fairfield County in Connecticut; 7-12 inches in eastern Queens and Brooklyn, as well as Nassau and western Suffolk counties,  and much of the New Jersey coast; and 12 or more inches in eastern Suffolk County  and southeastern Connecticut.

Northwestern New Jersey, the Poconos and Catskills would see 1 to 4 inches. 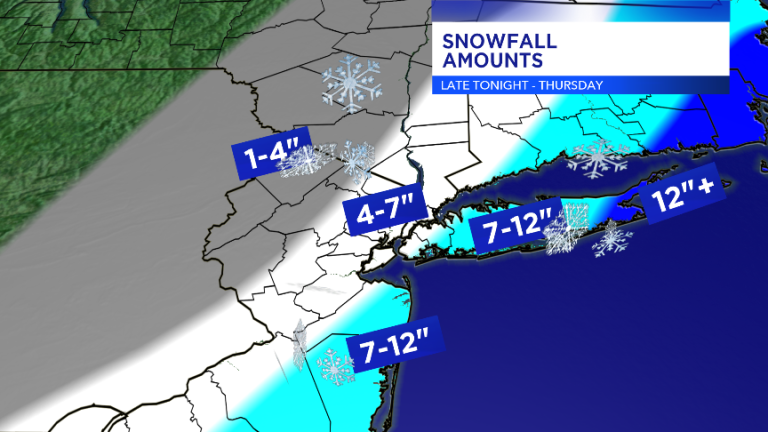 In addition to heavy snow, powerful winds carrying gusts of up to 50 mph could create blizzard-like, white-out conditions across the area and pose the the threat of scattered power outages due to downed trees and power lines. The strongest wind is expected to arrive late Thursday morning into Thursday night.

In addition to the blizzard conditions, an onshore flow  Thursday morning and the near astronomical high tide bring the risk of coastal flooding. Minor tidal flooding will be possible during the high tide cycle. One to two foot waves will also create beach erosion as well.

After the snow moves out late Thursday, the coldest air of the season so far will move in.

That’ll keep the snow where it is at least through the weekend and the start of next week, according to the head of New York City’s Department of Transportation.

“Once it falls, it is not going away,” DSNY Commissioner Kathryn Garcia said. “We are going to see almost historically low temperatures this weekend” and a warm-up won’t happen until Monday.

Daily highs haven’t risen above 32 degrees since Christmas Day, according to the National Weather Service. There’s a chance that the area could approach the record for most consecutive days with high temperatures being below freezing, the weather service said.

The longest stretch on record of below-freezing temperatures was 16 days, set back in 1961.