CORNWALL, N.Y. (PIX11) — A body pulled from the Hudson River is that of missing kayaker Vincent Viafore who disappeared in April while on a trip with his  fiancée, who is accused of murdering him, the Orange County District Attorney’s Office said Tuesday.

The body of a man was found May 23 in the water near West Point Military Academy, authorities said. That’s near where Viafore, 46, vanished after his kayak capsized in April.

He and his fiancee, Angelika Graswald, were kayaking back from Bannerman Island, about 50 minutes north of New York City, when his vessel tipped over, prosecutors said.

Graswald, a 35-year-old Latvian expatriate pictured below, admitted to tampering with Viafore’s kayak, prosecutors said. She faces one charge each of second-degree murder and second-degree manslaughter in his death, according to an indictment unsealed Tuesday.

According to the indictment, Graswald intentionally killed Viafore by removing a plug from his kayak so it would fill with water and by tampering with his paddle. It also alleges she took too long to call 911, pulling herself into a rescue boat but not getting help for her fiance, who was struggling in the 40-degree water. 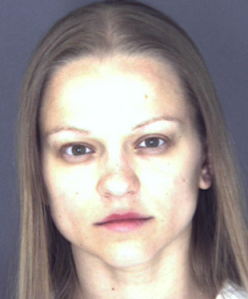 Prosecutors allege that Graswald felt trapped and stood to benefit by $250,000 from two life insurance policies, on which she was the primary beneficiary. She allegedly told investigators she felt “happiness and relief,” that “it felt good knowing he would die.”

Witnesses reported seeing Graswald “intentionally” capsize her own kayak because she “wanted authorities to believe she tried to save Viafore,” Assistant District Attorney Julie Mohl said.

Investigators are looking to speak with more witnesses who saw the couple before, during or after the incident. Anyone with information is urged to call the Orange County DA at 845-291-4000.

Graswald faces 25 years to life if convicted and is being held at the Orange County jail on 3 million dollars bail.