JAMAICA, Queens (PIX11/CNN) – Two police officers and a woman were injured, and a hatchet-wielding man was fatally shot during a bloody altercation Thursday in Queens and now officials are looking to see if the attack was prompted by terrorism.

Four rookie police officers were working near 162nd Street and Jamaica Avenue when a freelance photographer asked them to pose for a photo in front of a Conway store.  While they were posing, another man, 32-year-old Zale H. Thompson,  attacked without saying a word, Commissioner Bratton said at a press conference Thursday.

“The suspect was described as having charged at the officers,” Bratton said. 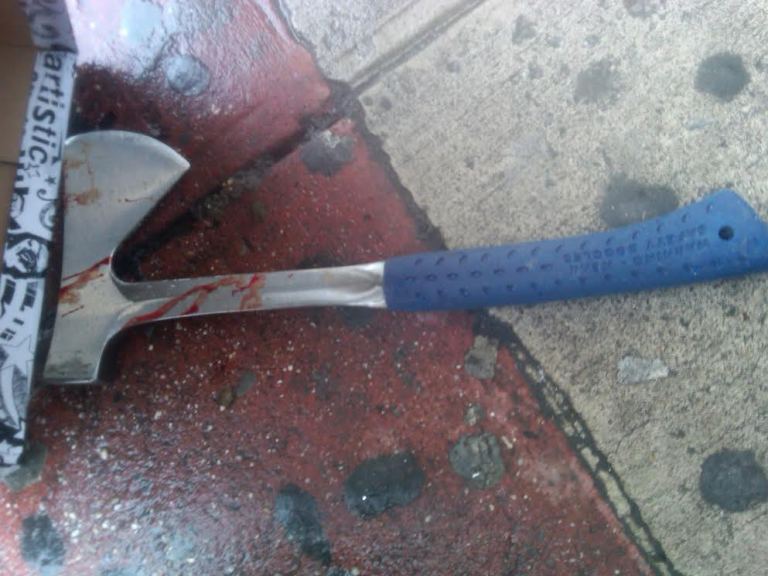 The man, who was wielding an 18-inch hatchet, was shot dead by officers.

The suspect kept swinging, striking a second officer in the back of the head, critically injuring officer Kenneth Healey, 25.

The other officers fired multiple shots, killed the suspect at the scene.

A 29-year-old woman passing by was struck by gunfire in the lower back.  She underwent surgery at Jamaica Hospital and is in stable condition. 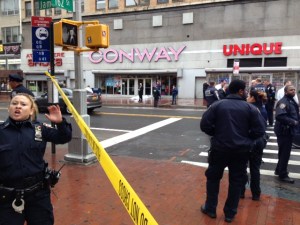 Thompson, who was wearing a green, hooded jacket at the time of the attack could be seen hiding behind a bus stop before he charged the officers.  It’s unclear what motive he had, since he said nothing before the attack.

In the wake of the Ottawa attack the NYPD has been on high alert, but Commmissioner Bratton  says there is no evidence yet that Thompson, a convert to Islam, did it for religious reasons.   Authorities are still investigating the possibility of a motive inspired by radicalism.

The officer who sustained the wound to the back of the head was stable and alert at the hospital, where friends and family have gathered.  He will be undergoing surgery for a “very serious injury to the back side of his head,” Commissioner Bratton said. 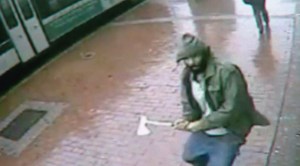 A man believed to be  Zale H. Thompson was seen on surveillance video swinging the hatchet at the first officer. (DCPI)

In just his first year on the job, the injured officer, who has not been identified, comes from a family of NYPD cops.

Commissioner Bratton said he doesn’t believe the photographer was working in any way with Thompson.  Officers are now reviewing his photos from earlier in the day.

“Three rookie cops absolutely modest about what they did, thankfully all are in good condition,” Mayor De Blasio said.

The attack happened in a bustling, commercial part of Queens.  An Applebee’s restaurant, a Verizon store, several banks and a church are located nearby.

The miserable weather may have prevented additional injuries, as the sidewalks were emptier than usual thanks to a steady rain.