SAN BERNARDINO, Calif. — Two suspects — a man and a woman  — are dead after hundreds of police officers swarmed a six-block area of San Bernardino in pursuit of the killers who gunned down 14 people and injured 17 others at a holiday party.

Syed Farook, 28, and Tashfeen Malik, 27, were identified late Wednesday night as the suspects in the deadly shooting, according to San Bernadino Police Chief Jarrod Burguan.

It is believed they were a couple.

Burguan said the motive still isn’t known but is “confident” the deceased suspects were the only two shooters, not three as previously thought.

He also said “terrorism” has not been ruled out as a possible motive. Burguan also believes “there had to be some degree of planning” and it wasn’t a spur of the moment operation.

“I’m still not willing to say that we know that for sure,” said an FBI official on whether it’s terrorism, saying there are some adjustments they are making to their investigation.

Several officers shot at the SUV which contained the two suspects, who were wearing tactical gear and had rifles.

Earlier police said they were hunting as many as three suspects, who had fled in a black SUV.

San Bernardino police reported that one person left a holiday party after a “dispute” and before the massacre happened — it wasn’t clear if that person returned to the party at the center for people with developmental disabilities.

Witnesses told police the gunmen fled the scene of the shooting at the Inland Regional Center in a black SUV. Hours later, helicopter images showed two armored trucks approaching a black SUV riddled with bullet holes. A person could be seen on the ground in blood not moving, with a long gun by his side.

Law enforcement officials told CNN that two suspects were in the SUV armed with AR-15-type weapons and threw what are believed to be pipe bombs out the windows as police closed in. It

A police officer was also hurt, but the injury is not life-threatening, police Sgt. Vicki Cervantes said.

Residents in the area are urged to stay inside as SWAT teams search for at least one suspect in a blocked off area outside an apartment building in Redlands, California.

Earlier, police exchanged fire in San Bernardino in a pursuit that ended with a “suspect down,” a San Bernardino police official said.  A black SUV, which was riddled with bullet holes, was surrounded by authorities. Helicopter video shows a person splayed on the ground, bleeding.

The “active scene” is a few miles away from the site of the massacre.

Officials pursued the three culprits who “came prepared” and had long guns they used in the attack at the Inland Regional Center, according to the San Bernardino police chief Jarrod Burguan.

He said the motive was unclear. “We do not know if this is a terrorist incident,” said David Bowdich, who directs the FBI’s Los Angeles Field Office.

“They came prepared to do what they did as if they were on a mission,” Burguan said.

“Up to three people had entered the building and opened fire on people inside the building,” Burguan said at an earlier press conference. “Information that I think is probably the most reliable at this point is that the suspects have fled, potentially in a dark-colored SUV.”

The president and CEO of the service center said the mass shooting happened in a conference area where the San Bernardino County Department of Public Health was hosting a banquet, the AP reported.

The day before the shooting, the facility held a holiday party, video posted to the organization’s Twitter page shows.

The ICF Holiday Party is in full swing! ☃ pic.twitter.com/AzOCbliVmb

Dave Hall, whose daughter goes to the social services facility, told KTLA the center is used by those with mild to severe autism.

“Who would think of such a thing to make an attack at that kind of facility?” Hall said.

Terry Petit’s daughter works at Inland Regional Center and sent her father a text saying she was hiding after gunfire erupted at her office. 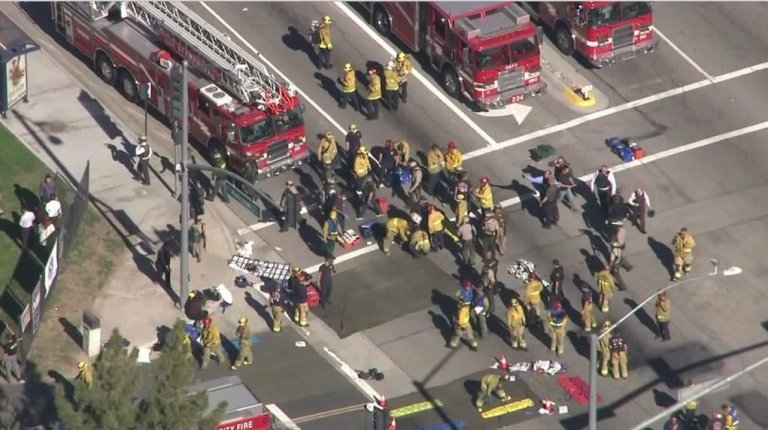 Choking back tears, Petit read the message from his daughter.

“People shot. In the office waiting for cops. Pray for us. I am locked in an office,” she wrote.

The Inland Regional Center is a facility run by the state of California that works with people living with developmental disabilities. Workers at the facility threw a holiday party for the people being treated at the center and posted video to Twitter with the message, “The ICF Holiday Party is in full swing!”

Inland Regional Center employs nearly 670 people and caters to more than 30,2000 with developmental disabilities spanning two counties, according to its Facebook page. Inland Regional center has programs for all ages, from babies to the elderly.

Aerial footage of the scene showed a massive triage operation, set up in the middle of an intersection near the scene, and multiple people being put on stretchers and loaded onto ambulances.

Survivors emerged from the facility in droves. Police searched people filing out of a building with their hands up before they reunited with loved ones.

The sheriff’s department there called on the public for information in the shooting. Any details can be reported anonymous to We-Tip at 1-800-78-CRIME.

President Barack Obama has been briefed on the shooting and has asked to be updated as the situation develops, according to his Homeland Security advisor Lisa Monaco.

“The one thing we do know is that we have a pattern now of mass shootings in this country that has no parallel anywhere else in the world,” the president told CBS News after the San Bernardino shooting.

The incident comes five days after another high-profile shooting in which a gunman opened fire at a Planned Parenthood facility in Colorado Springs, Colo., killing two civilians and a police officer.

Police in San Bernardino are seeking the public’s help to find the suspects. Call 866-346-7632 if you know anything.

‘A pillar and stalwart’: Oldest living American dies at 116

CHARLOTTE, N.C. (FOX 46) - The oldest living American, Hester Ford, has died at the age of 116, her family posted on Facebook Saturday night.

"It is with great sadness that we announce the passing of our beloved Mother Hester McCardell Ford today," the statement read. "She was a pillar and stalwart to our family and provided much-needed love, support and understanding to us all. She was the seed that sprouted leaves and branches which is now our family."

(KXAN) -- Some counties across several states are finding they have too much COVID-19 vaccine supply with too little demand, while others don't have enough to go around -- and who these counties voted for in the 2020 presidential election has more to do with it than you might guess.

While many factors likely contribute to vaccine availability nationwide, the New York Times recently examined survey and vaccine administration data for all U.S. counties, finding states and counties with high concentrations of people who voted to re-election former President Donald Trump are the most likely to have adults who are vaccine hesitant.

INDIANAPOLIS — Members of Indianapolis’ tight-knit Sikh community joined with city officials to call for gun reforms Saturday as they mourned the deaths of four Sikhs who were among the eight people killed in a mass shooting at a FedEx warehouse.

At a vigil attended by more than 200 at an Indianapolis park Saturday evening, Aasees Kaur, who represented the Sikh Coalition, spoke out alongside the city's mayor and other elected officials to demand action that would prevent such attacks from happening again.