THE BRONX (PIX11) — A trio is wanted in connection with an armed robbery at a Bronx barbershop involving a patron who received a haircut then pulled out a gun and demanded cash, police said Sunday.

Investigators said after Ramael Pierson, 24, finished getting his hair cut, he allegedly pulled out a gun and demanded money.

He and two others allegedly snagged the entire cash register and ran from the business, police said. No one was hurt.

After police identified Pierson as one of the suspects in the heist, they released a 2008 photo of him from a previous arrest. He is described as a black male, standing 5 feet 7 inches tall and about 150 pounds.

Surveillance cameras captured two other culprits — not yet identified by police — who are wanted in connection with the heist.

Anyone with information in the case is urged to call NYPD’s anonymous Crime Stoppers tip line at 800-577-TIPS, visit www.NYPDCRIMESTOPPERS.com, or text their tip to CRIMES (274637) then enter TIP577. 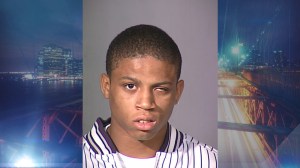