Almost a year after President Donald Trump was elected, New Yorkers and people around the nation who oppose him aren’t backing down.

On Saturday, demonstrators protested Trump and Pence as they marched through the streets of New York City, traveling down to Washington Square Park.

The protests took place as part of a nation-wide anti-fascism protest against the Trump administration, including cities like Los Angeles, Minneapolis, Austin, and Atlanta.

Throughout the year, demonstrations have occurred against the president in forms of rallies, protests, and marches.

Protests have been peaceful, but several pro-Trump and anti-Trump demonstrations have led to verbal abuse and/or physical violence, leading to multiple injuries, arrests, and the death of a pedestrian in the Charlottesville white nationalist rally.

The day following Trump’s inauguration, more than 500,000 people attended the Women’s March to protest his first full day in office. Protests drew large crowds across the nation and around the world. 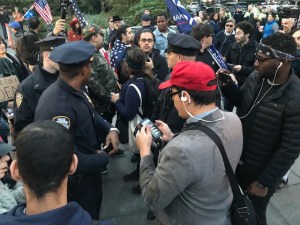 Police were called to an active shooter situation at the Stop & Shop on Cherry Valley Road just before 11:20 a.m., Rider said.

Between her more-than 12 million YouTube subscribers and best-selling cookbooks, a television show was the next big step for Pansino.

Under the Safe Summer NYC initiative, the city will work to deter gun violence with real consequences for picking up a firearm and create disincentives to turning to a life of crime by providing real, positive alternatives for young people.

What you can do to reduce return-to-work anxiety

Caught on camera: Children arrested in attempted carjackings in California