(PIX11) – Somehow CNN anchor Anderson Cooper was not aware of Clickhole — until today, that is, when he made his 5.88 million followers aware of that fact by calling out the site on Twitter for an inaccurate quote.

Ummm… @Clickhole, do u make this stuff up? I never said this quote and never spoke to the NYU class of 2015.https://t.co/oRSDgpQXxx

“I never said this quote and never spoke to the NYU class of 2015,” Cooper tweeted at Clickhole, in reference to the article, “Find Out What Anderson Cooper, Christopher Nolan, And Sigourney Weaver Have To Say”:

Clickhole, The Onion’s answer to Buzzfeed, is designed to be a time-sucking, click-bait quicksand of listicles, photo galleries and quizzes.  Designed to mock and, ironically, drive traffic, Clickhole has been so widely shared on social media, many simply couldn’t believe Cooper, a journalist, had never heard of it.

Somehow Anderson Cooper indeed had no idea what Clickhole was, but took it in good stride.  After all, he’s not the first to be tricked by the site, he now joins Russell Crowe, who is also having any more of Clickhole’s “rubbish.” 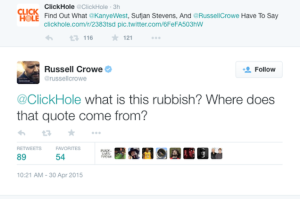 In all his classiness, Cooper took it in stride, posting the following forehead-smacking tweet: 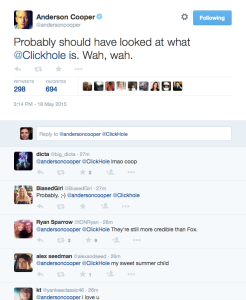