JAMAICA, Queens – Two women were arrested and several others sickened or injured after a brawl broke out on a JetBlue flight at John F. Kennedy International Airport.

The pilot had already landed Flight 960 from Jamaica at Gate 28 when an argument broke out before passengers could deplane. 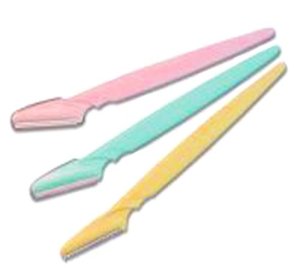 A razor like this one was used to slash a male passengers arm, according to port authority police.

A male passenger tried to break up the fight, but the woman seated by the window, identified by police as the suspect, took out an eyebrow razor and slashed him across the arm, according to police.  The woman in the middle seat then allegedly pulled out a can of pepper spray and shot it in the suspect’s face.

As the noxious gas filled the plane, the pilot decided to open the cabin door and have the suspect escorted from the plane.  She was charged with assault and criminal possession of a weapon.

The female victim was eventually also charged, for unlawful possession of tear gas.

Six people were treated by EMS for exposure to the pepper spray and released.  The male passenger’s injury is described as minor.