(CNN) — A 3-year-old boy shot his father and pregnant mother over the weekend inside a hotel room in Albuquerque, New Mexico.

Police say the boy removed a handgun from his mother’s purse Saturday and fired one shot, striking his father in the lower backside.

The bullet apparently exited through the father’s hip and hit the mother in the right shoulder. She is eight months pregnant, said Officer Simon Drobik of the Albuquerque Police Department. 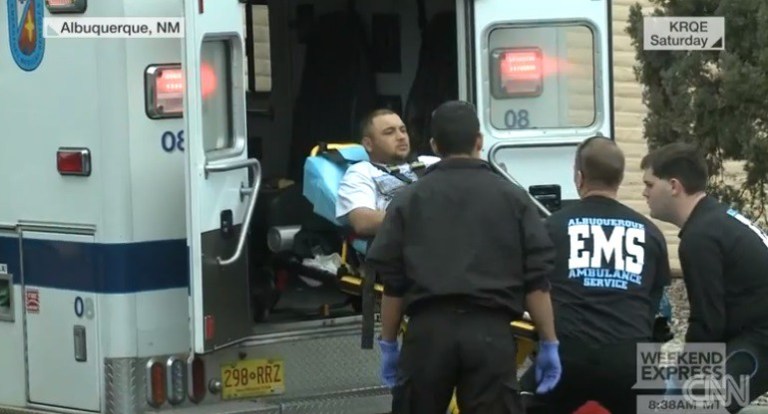 The New Mexico father of a 3-year-old who shot him and his pregnant wife is taken away in an ambulance. (Photo: KRQE)

The father was treated and released from the hospital while the mother was hospitalized in stable condition. The condition of her unborn child is unknown.

The boy and his 2-year-old sister, who was also in the hotel room, are under the care of the Children’s Youth and Families department. They were not injured in the incident.

Drobik says the case has been sent to Albuquerque District Attorney’s Office, which will determine whether the parents will be charged with criminal negligence.

Police did not identify the family.

The scammers say they are looking for overdue payments and threaten to suspend electricity services unless they receive a payment immediately, officials said. The caller also asks for customer information, including utility account numbers, social security numbers, and dates of birth.