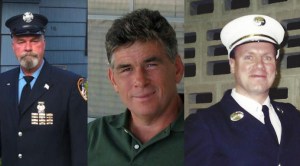 Dan Heglund, Robert Leaver and Howard Bischoff all worked at Ground Zero after 9/11.

NEW YORK (PIX11) — Three firefighters have died within hours of each other — all from illnesses related to their service during the terror attacks on September 11, 2001.

All three men were working at Ground Zero after the tragedy in recovery efforts.

The FDNY reports that first responders showed health problems soon after the attacks and that 99% of exposed firefighters reported at least one respiratory problem.

FDNY officials also recorded 850 firefighters and ambulance workers at the scene were diagnosed with cancer related to work at Ground Zero.