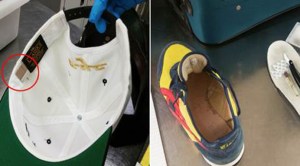 NEW YORK – Two passengers at LaGuardia tried to board a plane with several “artfully concealed” weapons hidden in their clothes and suitcases, according to officials.

TSA agents detained two people, both from the Bronx, on Monday around 5:30 a.m.

The passengers, 40-year-old Miguel Rosario Munoz and 18-year-old Lizbeth M. Esteras, had tickets for an American Airlines flight to Miami when they were stopped while trying to pass through security.

A search revealed a straight-edged razor inside a Munoz’s shoe, along with a blade hidden in a bottle of cologne, according to Port Authority Spokesman Joe Pentangelo.

Tucked inside the band of Esteras’ baseball cap, agents say they found a razor blade hidden near the label.

Munoz and Esteras face charges of criminal possession of a weapon.