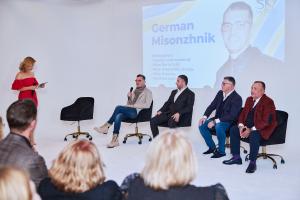 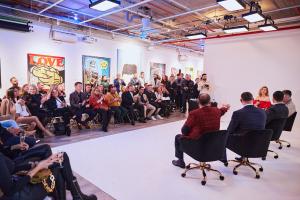 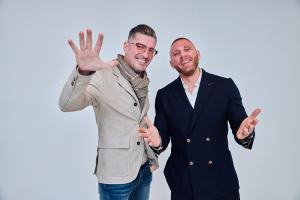 Panelists and ticketholders engaged in formal discussions and later mingled during a networking social with live music and a bar. The event was sponsored by PR Online. Future meetings are in the works and will be announced soon.

The first meeting was a massive success. It featured four speakers from various industries, all of whom were Ukrainian business owners or entrepreneurs whose projects support Ukraine. The panel had a diverse makeup, with guests engaging in discussion with leaders in four fields.

Though the speakers' careers and experiences cover different sectors, they all have a few things in common.

The first is community. These four aren't just businessmen-- They're valuable members of their respective boroughs and have made their community a better place through their work. Furthermore, they are all either Ukrainian by nationality or are dedicated to the advancement of Ukrainian people and businesses.

Gennady Perepada
Gennady Perepada was among the speakers at the first meeting. The Ukrainian-born real estate developer currently serves as president of One & Only Realty Inc. His 25 years of experience in New York and Florida real estate translates to over $3 billion in property sales, making him a formidable figure in the market. He's dedicated his career to making people's American Dream come true. He helps a largely foreign client base find the luxury home of their dreams.

Eduard Shnayder
New Yorkers who don't know the name Eduard Shnayder surely know of and frequent his company, Netcost Market. Shnayder co-founded the Brooklyn supermarket in the late 90s to serve immigrant communities with products from home. It quickly spread to the other boroughs and Philadelphia. Anyone interested in wholesale importing and exporting can learn from Shnayder.

Nurmud Nino Muhatasov
There are few businessmen more qualified to speak at a community-oriented meeting than Nurmud Nino Muhatasov. A successful tennis coach, Muhatasov went on to become co-founder and managing partner of Matchpoint sports clubs. With locations in Coney Island, Mill Basin, and Bensonhurst, these sports clubs assist in raising the next generation of young athletes with state-of-the-art tennis courts, aquatics centers, dance studios, and more.

German Mysonzhnyk
Brooklyn foodies should know the name German Mysonzhnyk. He’s a restauranteur who founded and owns Wise Bar & Grill on Neptune Ave. For nearly a decade they’ve served the finest high-end European food to the people of Brooklyn. The restaurant produces a variety of international cuisines, including French and Ukrainian, and also functions as a nightlife center with DJ parties on the weekend. His second project, Skywise Lounge, has brought countless legendary nights to the Sheepshead Bay area with its top-notch parties and Asian Fusion fare.

No one knows better about helping the community than Mysonzhnyk and his team who kept spirits high during the COVID-19 pandemic by preparing free meals for frontline healthcare workers.

A new chapter for Ukrainian entrepreneurship in the USA

The Ukrainian Business Community was recently established to create a wide-reaching network of Ukrainian businesses and entrepreneurs and provide them with the framework to expand their businesses and launch new ones. They also provide mentoring to rising stars in the industry and help promote members’ companies. This project began with the support of Ukrainian New York, America’s largest Ukrainian community with over 17,000 followers on social media.

Denys Kanel is a young, successful entrepreneur and CEO. He's made a name for himself as head of Geometria Advertising agency, but also runs Soho's G Gallery as the space's owner and serves a leading role at Ukraine New York, America's largest Ukrainian community with over 80,000 followers on social media.

Nataliya Myrovych is an influencer with multiple business endeavors under her belt. She founded V Aesthetic, a spa providing a number of health and beauty treatments in Brooklyn. Her company Aesthetika Education was opened later and is now one of the most reputable cosmetology schools in New York. Most recently she co-founded Help Ukraine NYC, a company that runs fundraisers to support Ukrainian refugees and the Ukrainian military.