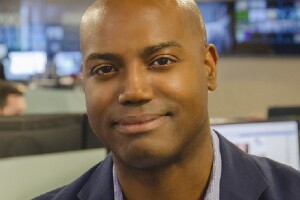 Jay Dow is a News Correspondent for the PIX11 News at 10 p.m., and host of the weekly show “Talk It Out With Jay Dow” on PIX11 Facebook Live.

His experience runs the spectrum.

Since joining WPIX in 2012, he has played an integral role in the station’s coverage of breaking news, investigative reporting, local and national politics, the economy and societal concerns.

In October 2012, Jay spent several days along the Jersey Shore as Superstorm Sandy carved a path of destruction through several beach communities.

Jay was also on the scene in Newtown, Connecticut in December 2012, after a lone gunman committed one of the worst school shootings in the nation’s history.

PIX11 News sent Jay to Boston just hours after terrorists attacked that city’s marathon in April 2013. He ended a week’s worth of work with 37 hours of continuous reporting, as law enforcement conducted an intense manhunt for the lone remaining suspect, ending with his capture.

In 2013, Jay began focusing on the various social issues facing our region and the country. He made three trips to Ferguson, Missouri to cover the fatal police shooting of Mike Brown, earning an Emmy Award for his reporting. Jay was also honored with two Associated Press Awards for his reporting on the Eric Garner fatal police encounter, and the NYPD’s controversial policy of “stop, question and frisk.”

In 2019, “Talk It Out with Jay Dow” was honored with an Emmy Award as one of the weekly shows produced from PIX11’s Social Media Center.

Jay was living in New York City on Sept. 11, 2001, and covered the attack on the World Trade Center. He spent that tragic day and the next several months providing daily coverage of New York City’s recovery from lower Manhattan.

While at NY1, Jay also covered the anniversary of the Murrah Federal Building bombing from Oklahoma City (2000), and the aftermath of the crash of American Airlines Flight 587 from the Dominican Republic (2001).

Jay began his on-air broadcasting career as the Blair County reporter for WJAC-TV in Johnstown, Pennsylvania. (1998-1999). He also worked as a Network News Assistant at CBS News (1997-1998).

In 1997, Jay earned a bachelor of science degree in political science with a concentration in economics from The College of New Jersey.

Jay is a former high school and college wrestler, a former triathlete and remains dedicated to physical fitness. He is married to former WPIX-TV producer Shamina Dow. They currently reside in New Jersey with their two daughters. Jay is a proud native of the U.S. Virgin Islands and was raised in Hackensack, N.J.