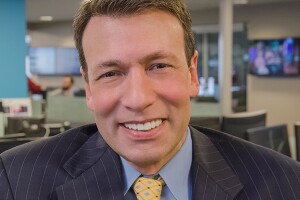 Meteorologist Craig Allen is one of the most authoritative weather sources in the New York tri-state area. Craig’s reports are accurate and authoritative, his manner warm and friendly.

Craig earned his meteorology degree from the Earth and Space Sciences Department at Stony Brook University in May 1979 and became chief meteorologist for WCBS 880 the following spring.

At age 12, Craig lugged a chalkboard to the kitchen table each night and pretended to be a TV weatherman, delivering a forecast to his family while they ate dinner. Today, audiences hear his radio reports on 880 every weekday morning from 5 a.m. to 10 a.m. and evenings from 4 p.m. to 7 p.m.

“It is the perfect occupation for someone who loves to watch the forces of nature," Craig says.

Craig prepares his own forecasts. He scans the tremendous (sometimes overwhelming) amount of atmospheric data and ponders all the possibilities before typing out a forecast which so many people will rely upon.

“If there is severe weather, I’ll try not be overly grim but I’ll make sure to get the sense of urgency across to the listeners and viewers," he says.

Here are some of Craig’s accomplishments over the years:

FOLIO Award for the Blizzard of 2013

Speaker at many schools, conventions and seminars concerning weather and safety
Member of New York Press Club and A.F.T.R.A. Honored with many civic awards.

What does Craig do in his limited free time?

“I cherish it! Sitting outdoors, watching the weather with my family and you’ll almost always find me out there doing all gardening and landscaping around my home. In winter, I’m a big New York Islanders fan.”