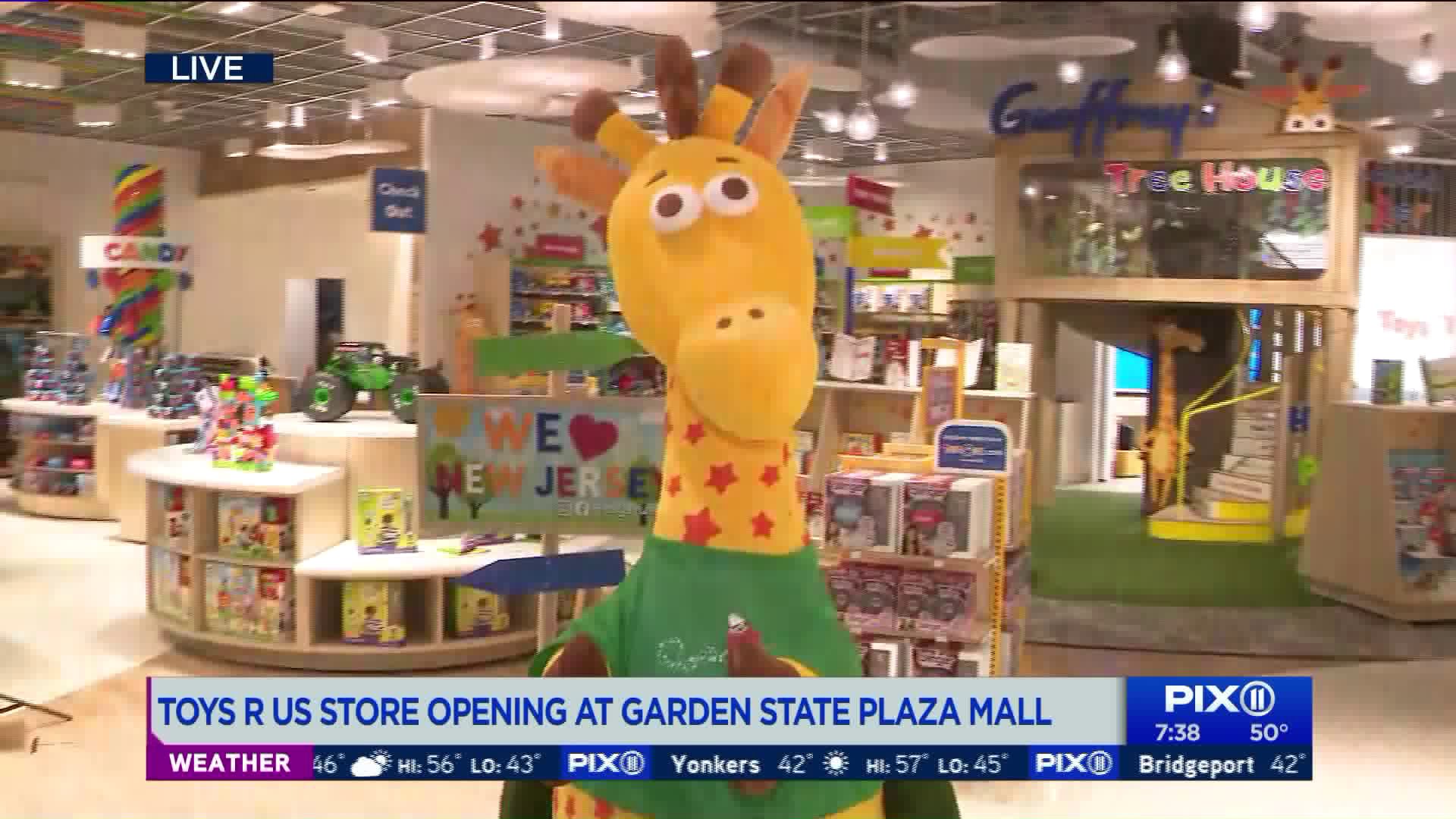 Two years after filing for bankruptcy and shuttering all of its U.S. stores, Toys `R` Us is back, relaunching with two new, innovative and interactive stores, and one of them is right in our area in New Jersey. The Paramus store at the Westfield Garden State Plaza Mall let PIX11 inside for a sneak peek ahead of its soft-launch.

PARAMUS, N.J. — Toys "R" Us returns to select malls in New Jersey and Texas this holiday season with what it hopes is an innovative retail plan that could upend how stores sell toys.

It comes two years after the company filed for bankruptcy and shuttered all its locations - seemingly for good - and just after toymaker Hasbro reported disappointing third quarter sales heading into the industry's most crucial sales season. Hasbro's chief rival, Mattel, enjoyed a sales surge of 3% over the same period. Both toy companies' success was largely tied to Toys "R" Us prior to the retailer's financial demise and rebirth.

The revamped Toys "R" Us will open two streamlined locations ahead of Black Friday in Westfield Garden State Plaza in Paramus, New Jersey, and The Galleria in Houston.

"We know that customers love shopping as a means of entertainment. That's something built into the DNA of human beings," Richard Barry, president and CEO of Toys "R" Us parent company, Tru Kids, told CNN Business. "We also know kids and families are looking for things to do on the weekends or when school's out. We know parents and families really value play and the value of toys overall. As we thought about the strategy, we wanted to put all those things together."

These are not simply stores, according to the company. The store chain will partner with the retail service startup B8ta to create hands-on, engaging experiences for kids and their parents, who may have fond memories of Toys "R" Us from their own childhoods.

The old Toys "R" Us stores were 40,000-square-foot behemoths with merchandise stacked on endless rows of metal shelves. The new stores are about 6,500 square feet, with interactive spaces where kids and parents can play with toys.

The revalitized Toys "R" Us website also showcases fewer toys, but gives more details on them. Those looking to purchase items are redirected to Target's website, which provides inventory and fulfillment services.

B8ta, which designs interactive stores displays where shoppers can try the latest products, will bring theaters, video games, and other engaging items to the new Toys "R" Us stores.

"We've got a huge treehouse in the middle of the store that kids will be able to climb into, an event space for movies in the store. We'll have great brands in the store," Barry said.

John Goodman, CEO of Candytopia, helped implement this "shop-o-tainment" idea two years ago before partnering with Toys "R" Us earlier this year to launch "Toys R Us Adventure," a touring indoor play space appearing in select malls across the country for a limited time. The ticketed attraction costs $20 for children ages 4-12 and $28 for adults. It features toy-themed play areas for small children who, the company hopes, will bug their parents to buy them merchandise associated with the fun zones they've just finished exploring.

These pop-up playlands aren't permanent stores. After about six months they will set up shop somewhere else.

Goodman, who previously served as CEO of The Gap, Kmart, and Sears, used a similar blueprint to help Candytopia founder Jackie Sorkin turn her birthday party and event business into a multi-million dollar, confection-themed touring attraction celebrated by celebrity influencers like Gwyneth Paltrow and Drew Barrymore.

Toys "R" Adventure's first run in Chicago and Atlanta generated national headlines last week as families celebrated the return of the familiar retail brand. Pictures and videos of smiling, laughing children walking through imitation snow caves and interacting with the Toys "R" Us mascot, Geoffrey the giraffe, are circulating now on Instagram and Facebook.

"We feel like we're adding a service to the mall in terms of driving additional traffic, anything from 1,700 to 2,200 people every single day," Goodman told CNN Business. "It's like the circus. The circus comes to town and the circus leaves. It may or may not be back in a couple of years. That's how our model is built."

This idea isn't exactly new, but it is catching on elsewhere. The minds behind New Jersey's new American Dream mall came up with a similar concept. The Rutherford, New Jersey shopping complex is less a place to buy consumer goods and more of an indoor theme park with cartoon-themed attractions in its Nickelodeon Universe. It also has an indoor ski slope, a water park, and an NHL regulation-sized ice rink.

Scott Webb, CEO of the digital consulting firm Avionos, says this may be the future of toy-related, brick-and-mortar retail shopping. Encouraging kids to play with toys that aren't tied to TV, movie, or video game characters is crucial for the industry, which has struggled in an era when children binge watching shows on streaming services often avoid commercials advertising toys that they won't see on their favorite shows.

"Kids as much as anything are digital consumers now," Webb told CNN Business. "The Hasbro numbers back this up. The segments of toys that have really thrived are those tied to some intellectual property, whether it's Fortnite or Marvel or Star Wars."

Webb said Toys "R" Us turning its company into a toy discovery brand as opposed to a retailer may be a good strategy. "I think they absolutely have a lot of brand equity to carve out a new niche in that role," he continued. "But I think it would be hard to predict them ever discovering the same dominance in retail."