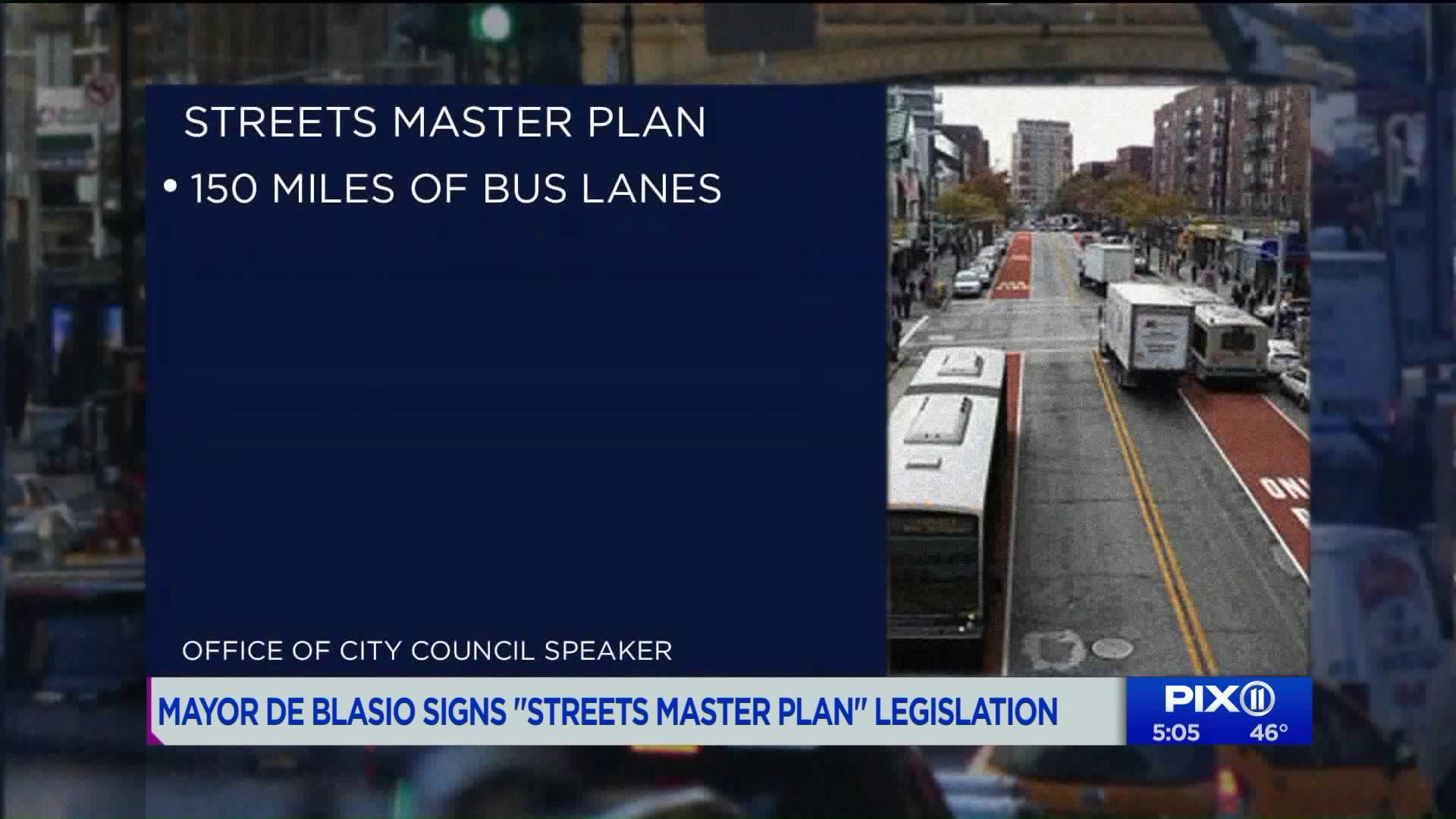 Since the 1920s the traffic patterns on the streets of New York have been written largely in favor of cars and trucks automobiles. That -- at least on paper -- changed today. Pedestrians and cyclists generally love the new law, called the Streets Master Plan.

TRIBECA, Manhattan — A plan to change the streets of New York from being car-oriented to promoting walking, cycling and public transportation became law on Tuesday.

"I think it's great," said a woman crossing West and North Moore streets.

She, and a variety of other pedestrians, told PIX11 News that they were very pleased with the Master Streets Plan. Joining them in approval were cyclists.

"That's good," said one cyclist. "It's always good, because it's difficult to share the road."

Providing more space for bikes to be off the roadways is a big part of the Master Streets plan. Another major aspect of the campaign is to decrease the number of vehicles.

Among its goals, the Streets Master Plan is designed to accomplish a list of roadway changes:

"I think it's a great idea," said Rachel Waley, as she was going about her work as a dog walker.  "I bike everyday, everywhere."

Ian Wentworth was crossing West Street on foot, but he owns a car that he uses to commute to a bus hub in New Jersey from which he commutes into Lower Manhattan every day.  "It makes sense," he said. "The driving here [in the city] is always so congested. The traffic is always rough. Most people take public transportation anyway."

According to the New York City Economic Development Corporation, 27% of New Yorkers commute by car, truck, or van each day. The rest rely on public transportation, walking, or cycling.

A 24-year veteran limousine driver said that he feels that the new regulations compromise safety for drivers, as well as everyone else.

"New York City has the most cars than ever," he said, adding that the Master Plan removes traffic lanes from roadways, making conditions more congested.  He called it "too risky for pedestrians.”

One of the main advocates for the law, Mary Beth Kelly, said that by slowing down traffic, and protecting walkways and bikeways, New Yorkers will be safer. Fourteen years ago, she witnessed her husband, Dr. Carl Henry Nacht, get mowed down by a truck as it crossed the West Side bike path. He died from his injuries.

"Losing a loved one or being severely injured will become a thing of the past," Kelly said about the Streets Master Plan. "That's the true Vision Zero," she added, referring to Mayor Bill De Blasio's plan to reduce pedestrian and cyclist injuries and deaths.

The Master Plan, designed and promoted by Council Speaker Corey Johnson, will be implemented beginning in 2021, the same year that Johnson is widely expected to run for mayor.

The new law requires the city's Department of Transportation to implement an updated master plan for streets and transportation improvement every five years.