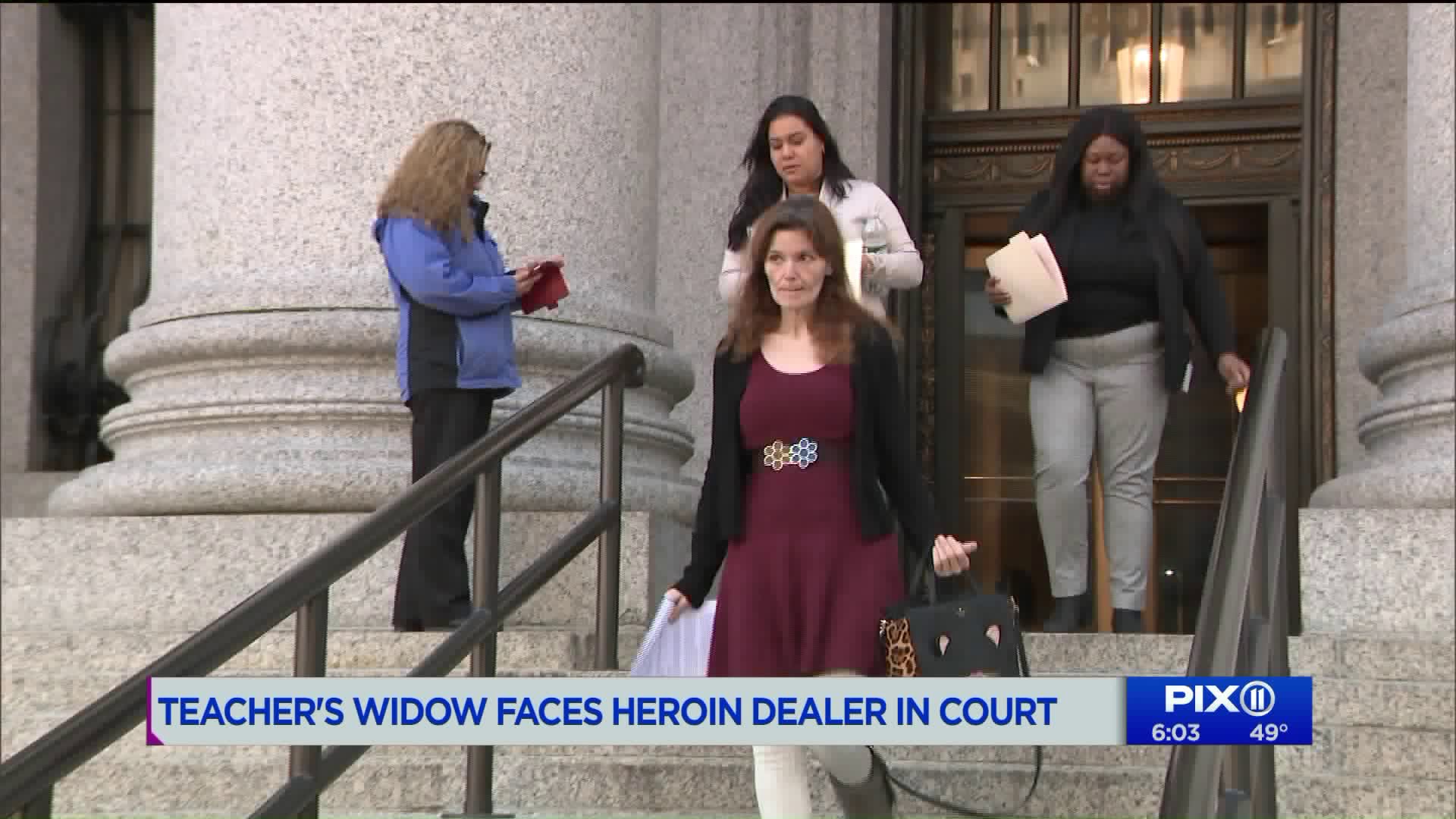 Rachel Azimi became a widow right after Thanksgiving 2017. Her husband, Matt, was a teacher, beloved by his special needs students in the Bronx. But the school community was stunned when Matt Azimi was discovered locked in the faculty bathroom, dead from a heroin overdose. His wife was pregnant with their 3rd child at the time.

MANHATTAN — The widow of a Bronx special ed teacher who fatally overdosed in his faculty bathroom in 2017 told a federal court that life as she knew it died the same day her husband, Matthew, was found lifeless at school.

“Suddenly, the community that embraced me viewed me with suspicion and hostility,” Rachel Marbach Azimi said Friday. “Kids couldn’t play at our house.”

On Nov. 30, 2017, the Azimi family was living in peaceful Carmel, about forty miles north of Public School X811, where Matt Azimi was a beloved educator who played guitar for his disabled students and even planted a garden with them.

That night, NYPD detectives showed up at the house in Putnam County. Rachel was pregnant with the couple’s third child, a girl. She and Matt had been married nearly 10 years.

“He never saw his last child,” Azimi told Kashawn Lyons, a 31-year-old Bronx drug dealer who agreed to plead guilty in connection with her husband’s death. “And as long as you live, you still have hope for a second chance.”

Lyons, who was on parole in 2017 for a federal firearms conviction, was only free 78 days when he sold a deadly dose of heroin to Matt Azimi, near the Longfellow Avenue school.

“He did not know that those drugs were laced with fentanyl," his lawyer said. "However, we all know that heroin can kill you.”

The defense attorney tried to convince the judge her client’s bad choices could be traced to an extremely difficult childhood: learning delays, a history of seizures, parental incarceration, suicidal behavior, poverty and homelessness.

Lyons had pleaded guilty, believing he had an agreement to get nine or ten years in prison, instead of a potential 20 year sentence.

The defense lawyer pointed out associates of Lyons got much less jail time.

But the prosecutor, Justin Rodriguez, argued that Lyons engaged in a pattern of criminal behavior, pointing out that Lyons went back to selling heroin “two or three months after Mr. Azimi died.”

When the defense attorney suggested Matt Azimi may have intended to kill himself, his widow yelled out in court during a brief break.

“Shame on you!,” Rachel Azimi cried out. “Saying that he killed himself at work while I was six months pregnant.”

The judge imposed a sentence of 210 months—17 ½ years—while the mother and sister of Kashawn Lyons looked on from spectators’ seats. Lyons’ grandmother and young daughter had spent about an hour in court.

Outside court, Rachel Azimi recounted again that her husband had admitted before his death that he was struggling with heroin addiction again, something he had grappled with in his younger years.

He had survived one overdose in the Bronx two months before he died, initially telling his wife he’d suffered food poisoning.

The NYPD tracked down Kashawn Lyons, because the last three calls Matt Azimi made from his cell phone were to Lyons.

The dealer was listed in his contacts as “K.”

Rachel Azimi said Matt had told her the dealer was tempting him, by selling so close to the school.

Since the teacher’s death right after Thanksgiving 2017, Rachel Azimi has given birth to their daughter, Roxanne, who’s now almost 2 years old.

‘Their oldest daughter, Violet, will soon be 11 and son Charlie is 6.

The widow, who was a licensed social worker, told the court “I can no longer work and I must rely on Social Security to make ends meet.”

She told Lyons she does have compassion for him.

The weary widow told PIX11 she misses her husband of nearly a decade.

“I was there from the start, and I was there at the end, and I was by myself,” Azimi said. “I’m standing here for Matt. And I’ll stand for him the rest of my life.”