From mild to miserable: Tri-state area plunges into a deep freeze in a matter of hours 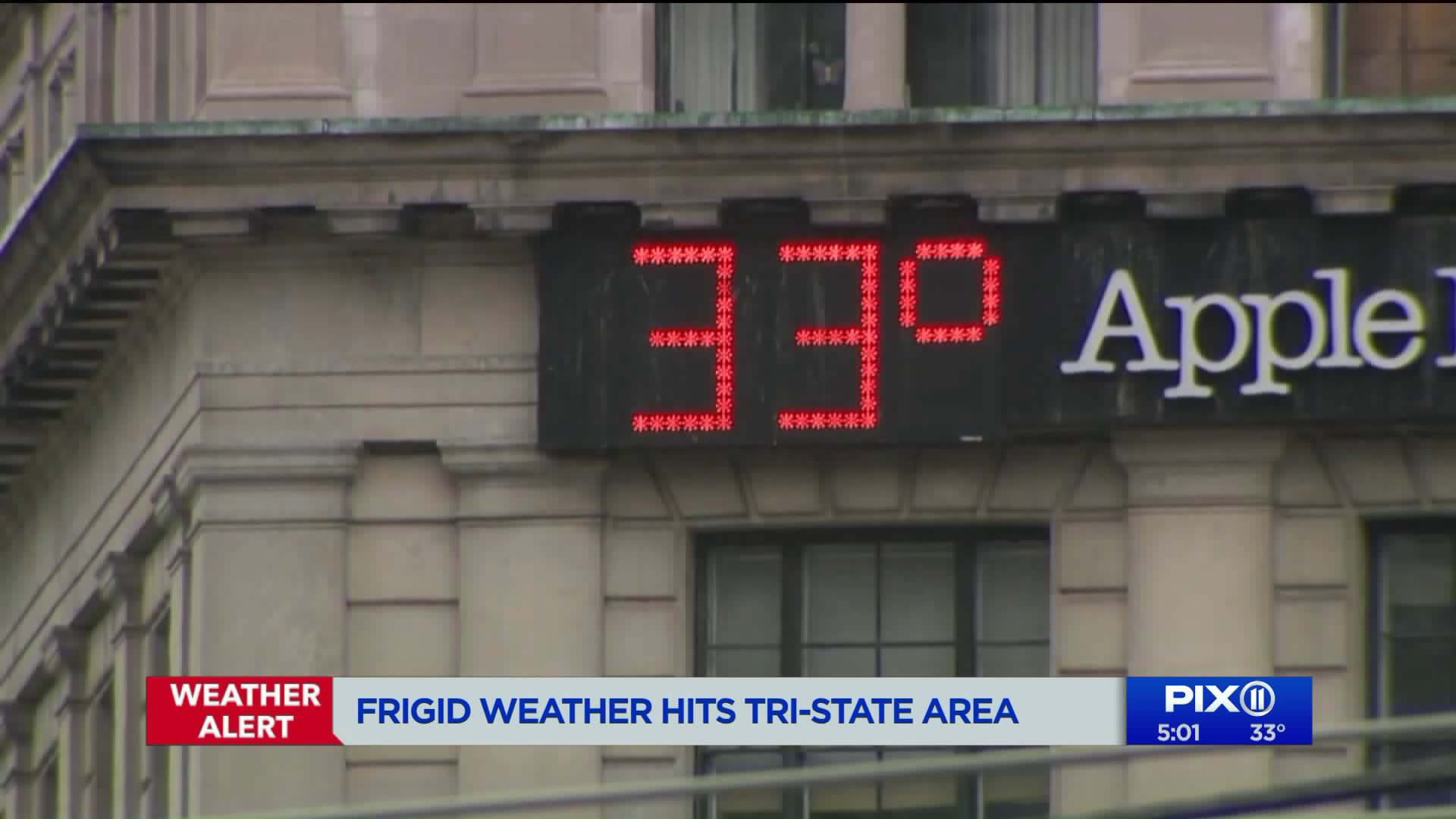 Snow and cold records fell as an arctic airmass that started in Siberia spilled over a big chunk of the eastern half of the U.S., including the normally mild South, on Tuesday.

LOWER MANHATTAN -- Temperatures in the Tri-state region dropped off a steep cliff on Tuesday, leaving some people in shock, after they'd left for work in the morning amid nearly 60 degree conditions, then came home in the evening with the air feeling well below freezing.

Overnight, the temperatures are expected to go even lower as part of a deep freeze that's gripped most of the country. New York City's government planned for a snow emergency that didn't materialize, but concerns persist with the sudden frigidity.

That's in part because the cold snap has resulted in at least four deaths nationwide, including the death of a girl in Kansas, and three deaths in Michigan. The icebox surrounding the New York City region now is part of that weather system.

"Oh my God!" exclaimed Daequan Andino, as he walked downtown, near the World Trade Center.

His reaction to the cold was shared by many people as the temperature gradually decreased from mild to frost-biting in about eight hours.

"It's very cold outside," said Valerie Johnson, a downtown resident, "and tonight it's 22 [degrees], right?" she asked.

She was spot on for the temperature overnight. However, with steady, stiff winds from the northwest, it will feel like 10 to 12 degrees Fahrenheit in many parts of our region overnight Tuesday, into Wednesday.

It left people like a family of tourists from London -- where the high on Tuesday was in the mid-40 degree range -- exasperated.

"It's a shock to the system," said Mark Burroughs.

He crossed streets from which a white dust cloud rose -- dust from thick layers of salt that city sanitation crews had spread on streets all over New York and its suburbs. It was done in anticipation of the worst, which didn't happen.

"I think they're probably compensating for last year's mess up, mishap," said New Yorker Vedant Gokhale, "and they're being safe, because they don't want the bad press like they got last year."

He was referring to the 6 1/2-inch snowstorm that took the city by surprise on Nov. 15, 2018. It left the entire region in gridlock. Many municipalities, including New York City, were trying to guard against that on Tuesday.

Taxpayers did not seem to mind the cost of the salt and work hours sanitation workers were putting in.

"Prevention is the best way to avoid a lot of accidents," said Sheila Alive, as she walked downtown.

"I prefer to err on the side of caution," he told PIX11 News, "so I'm happy with the way they did things."

As to the reason for the radical temperature change, many people who spoke with PIX11 News cited the same thing.

"The whole climate change thing is crazy these days. The weather patterns, it's unbelievable," he said. "Expect the unexpected, right?"

A variety of scientific sources have concluded that climate change can bring about more radical changes in weather.

In any case, people feel different about going from mild to cold in short order. NYPD Commissioner James O'Neill was at a boat-christening ceremony outside on Tuesday, and said, "It's on days like this that I miss two things: one, I miss my hair. Two, I miss my uniform, because I get to wear a hat."

"No," said the self-described winter person. "I love it."