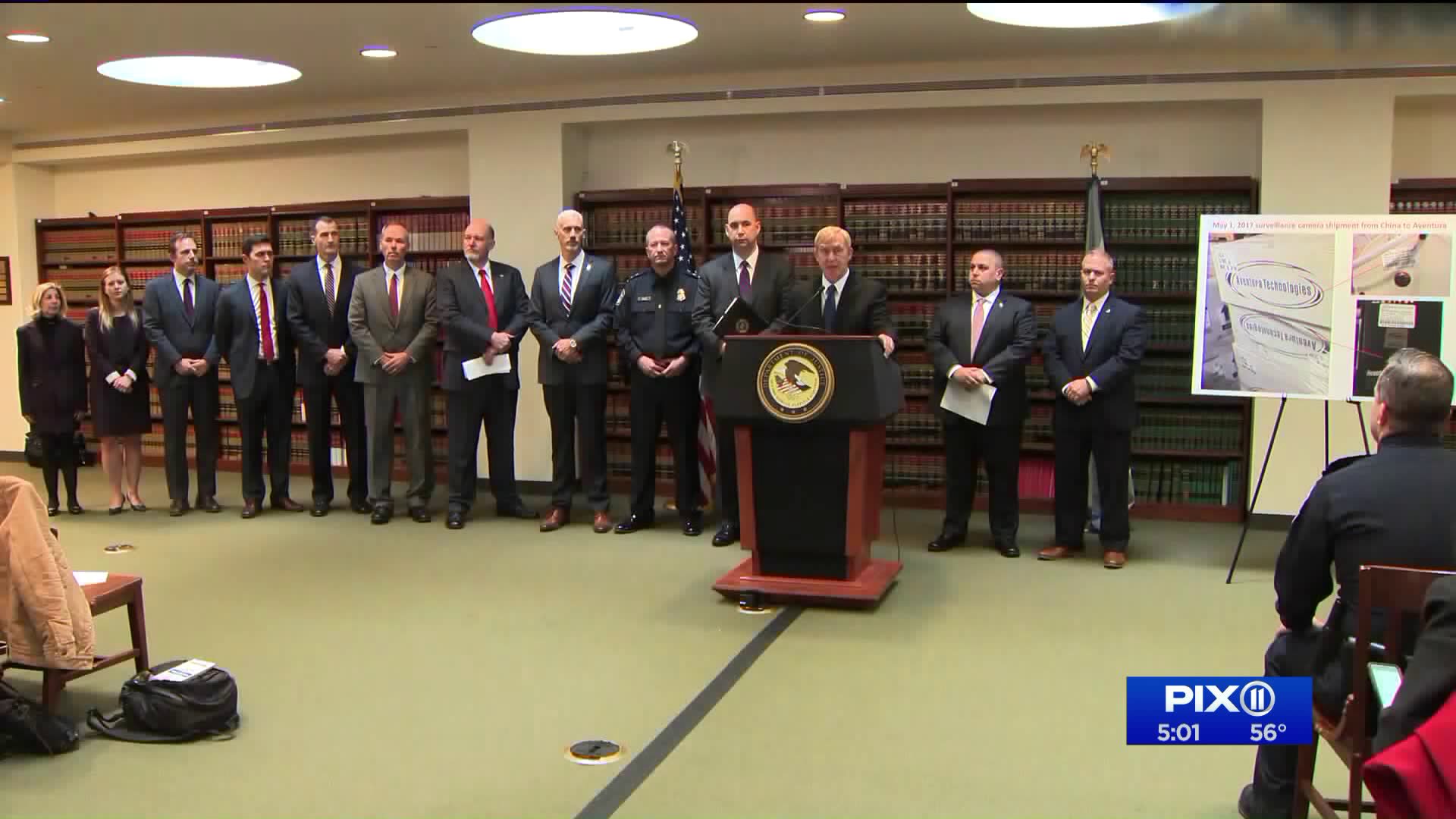 A Long Island husband and wife were among seven people cited in a federal complaint Thursday, charged with selling Chinese-made security cameras to the U.S. military and other agencies, passing them off as American technology.

BROOKLYN — A Long Island husband and wife were among seven people cited in a federal complaint Thursday, charged with selling Chinese-made security cameras to the U.S. military and other agencies, passing them off as American technology.

The scheme allegedly earned Jack and Frances Cabasso, of Northport, along with their partners, $88 million over the course of a decade.

The company they run is called Aventura Technologies, based in Commack, N.Y.

“As alleged, the defendants falsely claimed for years that their surveillance and security equipment was manufactured on Long Island, padding their pockets with money from lucrative contracts without regard for the risk to our country’s national security,” said US Attorney for the Eastern District Richard Donoghue.

At a massive press conference attended by military officials, including a leader from the Naval Criminal Investigative Service (NCIS), Donoghue said Aventura received “approximately one thousand shipments since 2010 from the People’s Republic of China” that “ended up on Army and Air Force bases, even U.S. aircraft carriers.”

This meant the American military was using Chinese-made hardware and software on its computer systems that “could potentially access our government’s most sensitive information.”

Donoghue noted the alleged scheme was going on for 13 years, since 2006.

“We were deep into it before anyone in the U.S. government realized anything was wrong here,” Donoghue observed.

“Obviously, we had to go in and remove this equipment.”

Donoghue said when the equipment reached Aventura’s headquarters in Commack, it was given fake “Made in the USA” labels.

Troy Miller of Customs and Border Protection said his agency noticed “many pre-assembled cameras” from China were arriving at Kennedy Airport in Queens for Aventura Technologies “between May 2017 to today.”

Also, in August 2018, an Air Force service member noticed Chinese characters on the built-in screen of one of 25 body cameras the military branch had bought for training, thinking the cameras were made on Long Island.

At one point, Aventura was allegedly trying to get business with a firm in Qatar that wanted American-made security equipment.

Federal prosecutors said in the complaint that Aventura sent a photo of a purported assembly line, showing men in blue lab coats.

It turned out the photo came from a trade publication of an assembly line in the People’s Republic of China.

FBI Special Agent in Charge for New York William Sweeney said “the only thing made in the USA were the lies the Cabassos sold to their victims.”

The couple and their associates were picked up early Thursday morning on Long Island, and they’re expected to be arraigned in federal court Thursday afternoon.

Federal prosecutors said they’ve frozen 12 of the company’s bank accounts and also seized a 70-foot yacht from the Cabassos’ backyard in Northport, LI as part of asset forfeiture proceedings.