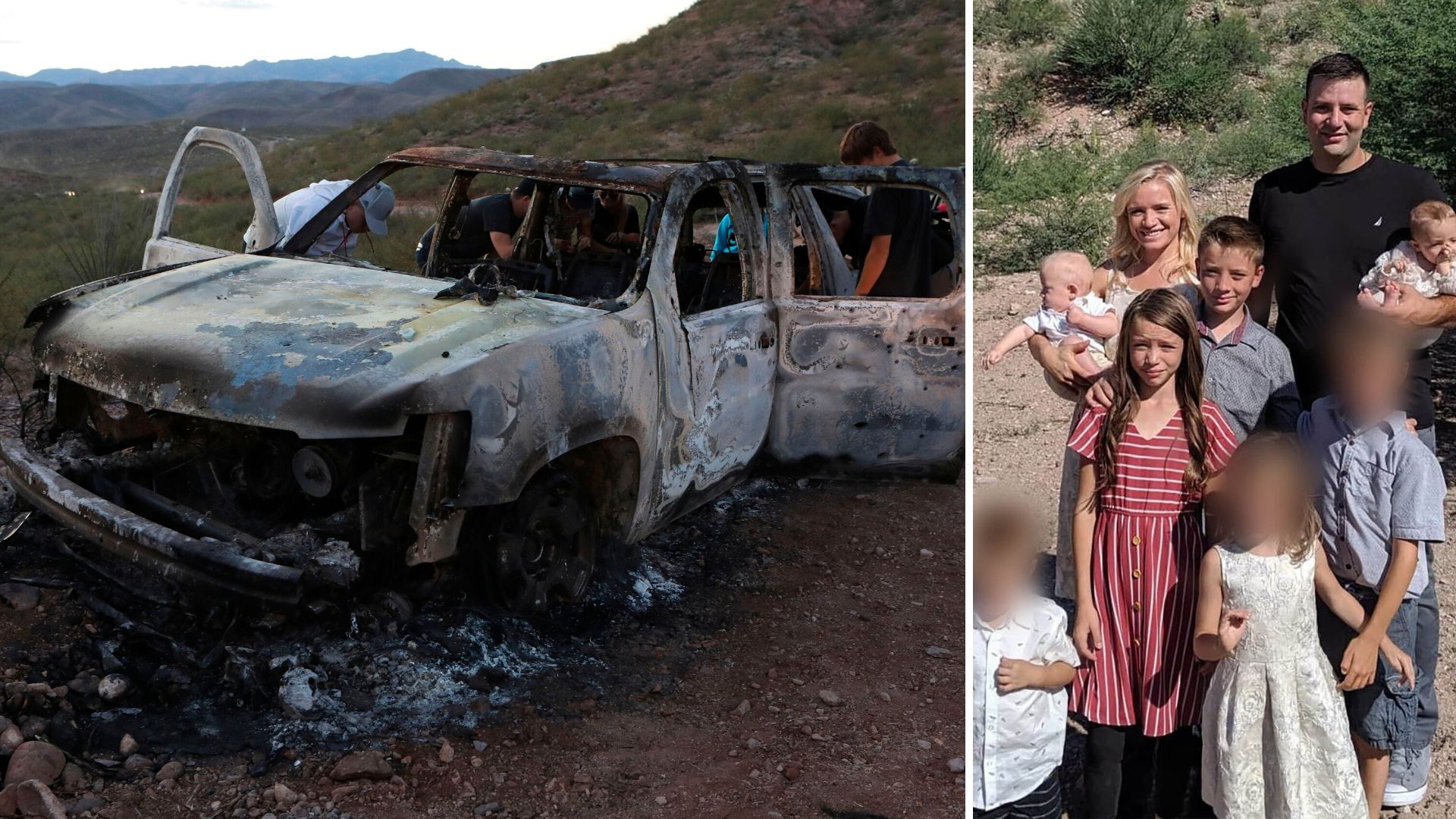 The eight children, some mere infants, who survived a deadly ambush in northern Mexico not only escaped the drug cartel gunmen who killed their mothers but managed to hide in the brush, with some walking miles to get help despite grisly bullet wounds. Criminal investigators said late Tuesday that a suspect was arrested and is under investigation for possible connections with the deaths. In a statement posted on Facebook, the Agency for Criminal Investigation for the state of Sonora said that the suspect was found in the town of Agua Prieta, right at the border with the U.S. state of Arizona, holding two hostages who were gagged and tied inside a vehicle.

GALEANA, Mexico — The eight children, some mere infants, who survived a deadly ambush in northern Mexico not only escaped the drug cartel gunmen who killed their mothers but managed to hide in the brush, with some walking miles to get help despite grisly bullet wounds.

In a testament to a mother's devotion, one woman reportedly stashed her baby on the floor of her Suburban and got out of the vehicle, waving her arms to show the gunmen she wasn't a threat. She may have moved away from the vehicle to distract their attention; her bullet-ridden body was found about 15 yards (meters) away from the SUV.

Howard Miller, the man in the black shirt, and the three children with blurred faces survived the attack. The five others were killed. (family/CNN)

The mother was one of nine U.S. citizens — three women and six children all living in northern Mexico — slaughtered Monday when cartel gunmen ambushed three SUVs along a dirt road in an attack that left one vehicle a burned-out, bullet-riddled hulk. Mexican officials said the gunmen may have mistaken the group's large SUVs for those of a rival gang amid a vicious turf war.

Criminal investigators said late Tuesday that a suspect was arrested and is under investigation for possible connections with the deaths. In a statement posted on Facebook, the Agency for Criminal Investigation for the state of Sonora said that the suspect was found in the town of Agua Prieta, right at the border with the U.S. state of Arizona, holding two hostages who were gagged and tied inside a vehicle.

The suspect, whose gender was not specified in the release, was also found in the possession of four assault rifles and ammunition, as well as various large vehicles including a bullet-proofed SUV, the agency said.

The five wounded children were seriously enough injured that Mexican authorities flew them to the border in a military helicopter to receive hospital care in the United States. Sonora state health officials said they were "stable" at the moment of transfer. Three other children who were not wounded are in the care of family members in the tiny hamlet of La Mora in northern Mexico.

But what the children went through in the remote, mountainous area of Sonora state is nearly indescribable.

Kendra Miller, a relative, said in an account of the shootings that Devin Blake Langford, 13, was one of the few uninjured young people and quickly took charge, eventually walking about 14 miles (22.5 kilometers) back to La Mora for help.

Members of the Lebaron family watch the burned car where part of the nine murdered members of the family were killed and burned during an gunmen ambush on Bavispe, Sonora mountains, Mexico, on November 5, 2019. (STR/AFP via Getty Images)

"After witnessing his mother and brothers being shot dead, Devin hid his six other siblings in the bushes and covered them with branches to keep them safe while he went for help," according to the account. "When he took too long to return, his 9-year-old sister left the remaining five to try again."

That girl, Mckenzie Rayne Langford, walked for hours in the dark before she was found several hours after the other children were rescued. She was listed as missing for a while.

Altogether, the kids were on their own from about 1:00 p.m., when the ambush began, until about 7:30 p.m., when they were rescued. Relatives from La Mora tried to reach them before that, but were turned back by gunfire. The area is the site of a cartel turf war.

In recordings of calls between the rescuers, they can be heard debating whether it was better to risk more lives, or wait for an hour or two until Mexican army troops arrived. It was an agonizing decision.

What they saw when they found the children was terrifying.

The killers were apparently members of the Juarez drug cartel and its armed wing, La Linea — "The Line" — whose gunmen had entered Sinaloa cartel territory and set up an armed outpost on a hilltop and an ambush further up the road. The Juarez cartel apparently wanted to send a message that it controlled the road into Chihuahua. It was this invasion force that the American mothers and their three vehicles drove into.

It was only after the first vehicle was shot up and set afire that 50 or 60 Sinaloa cartel gunmen showed up to see what had happened.

But it isn't the cruelty of the cartel, but the bravery, innocence and sacrifice of the victims that relatives want remembered.

Austin Cloes, a relative of the victims, said from his home in Salt Lake City that they were good people who loved their children and enjoyed their quiet lives based around a successful pecan farming operation.

"This sort of thing shouldn't go unnoticed," said Cloes, who works with at-risk youth and coaches high school basketball. "And these sorts of people shouldn't just be buried without their names being put out there. These are great people."

The dead in the attacks included a mother, her 8-month-old twins, her 10-year-old daughter, a 12-year-old son. Another mother lay dead in the front seat of another Suburban, along with the bullet-riddled bodies of her sons, ages 11 and 2.

The victims lived in Sonora state, about 70 miles (110 kilometers) south of Douglas, Arizona, in the hamlet of La Mora, which was founded decades ago by an offshoot of The Church of Jesus Christ of Latter-day Saints. Many La Mora residents call themselves Mormons but are not affiliated with any church.

A number of such American farming communities are clustered around the Chihuahua-Sonora state border. Many members were born in Mexico and have dual citizenship. While some of the splinter groups were once polygamous, many no longer are.

All of the victims were apparently related to the extended LeBaron family in Chihuahua, whose members have run afoul of the drug traffickers over the years. Benjamin LeBaron, an anti-crime activist who founded neighborhood patrols against cartels, was killed in 2009.

The victims had set out to visit relatives in Chihuahua. One woman was headed to the airport in Phoenix to meet her husband.

While a drug-related violence has been raging for years in Mexico, the attack underscored the way cartel gunmen have become increasingly unconcerned about killing children as collateral damage. In August in Chihuahua state, cartel gunmen fired 123 bullets at a man and also killed three girls, ages 4, 13 and 14. In June, a young boy was killed along with his father in Sonora state. In July, a 10-year-old was killed during a robbery in Puebla state.