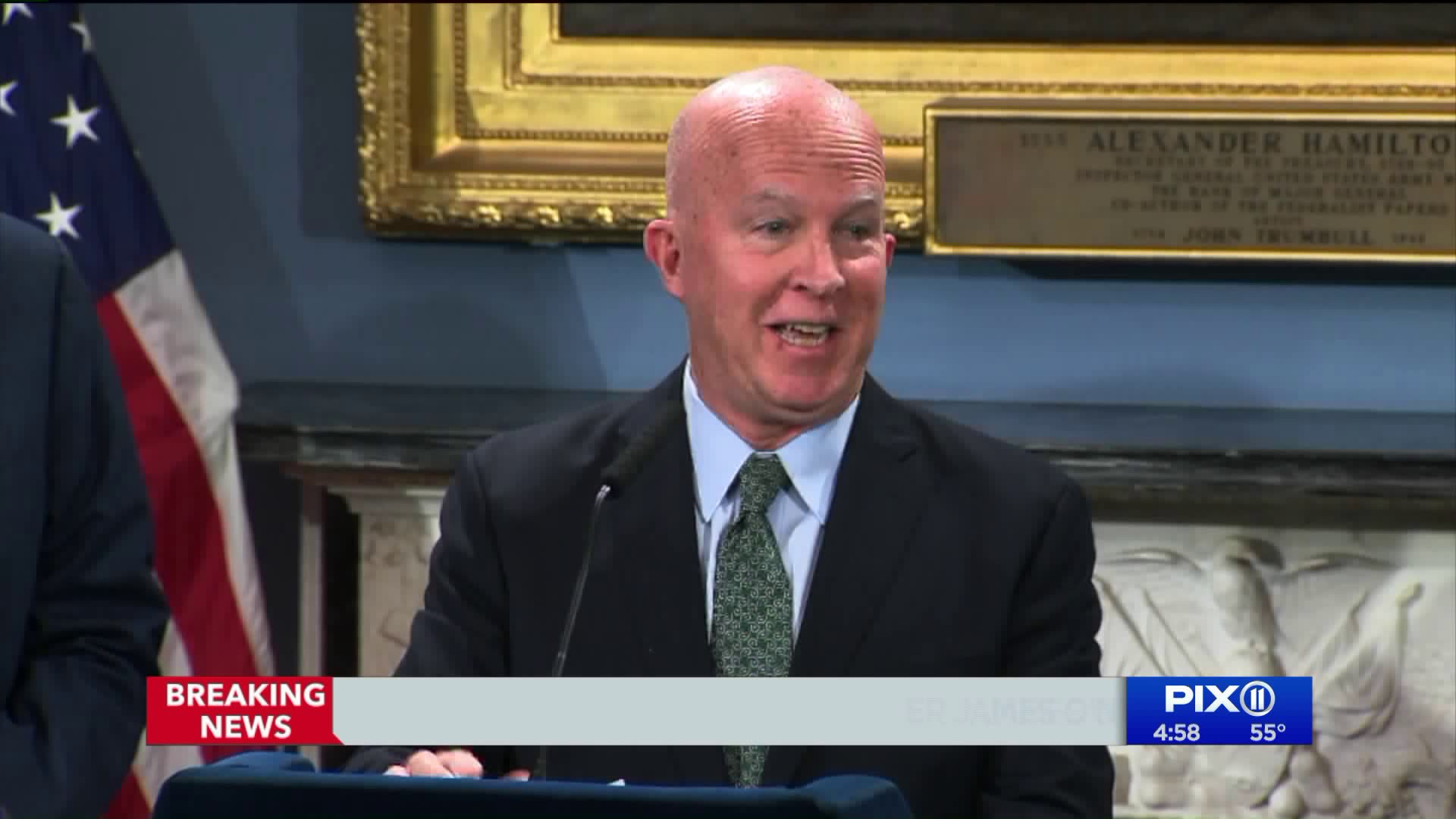 New York City Police Commissioner James O`Neill is stepping down from the force, announced at a press conference Monday. 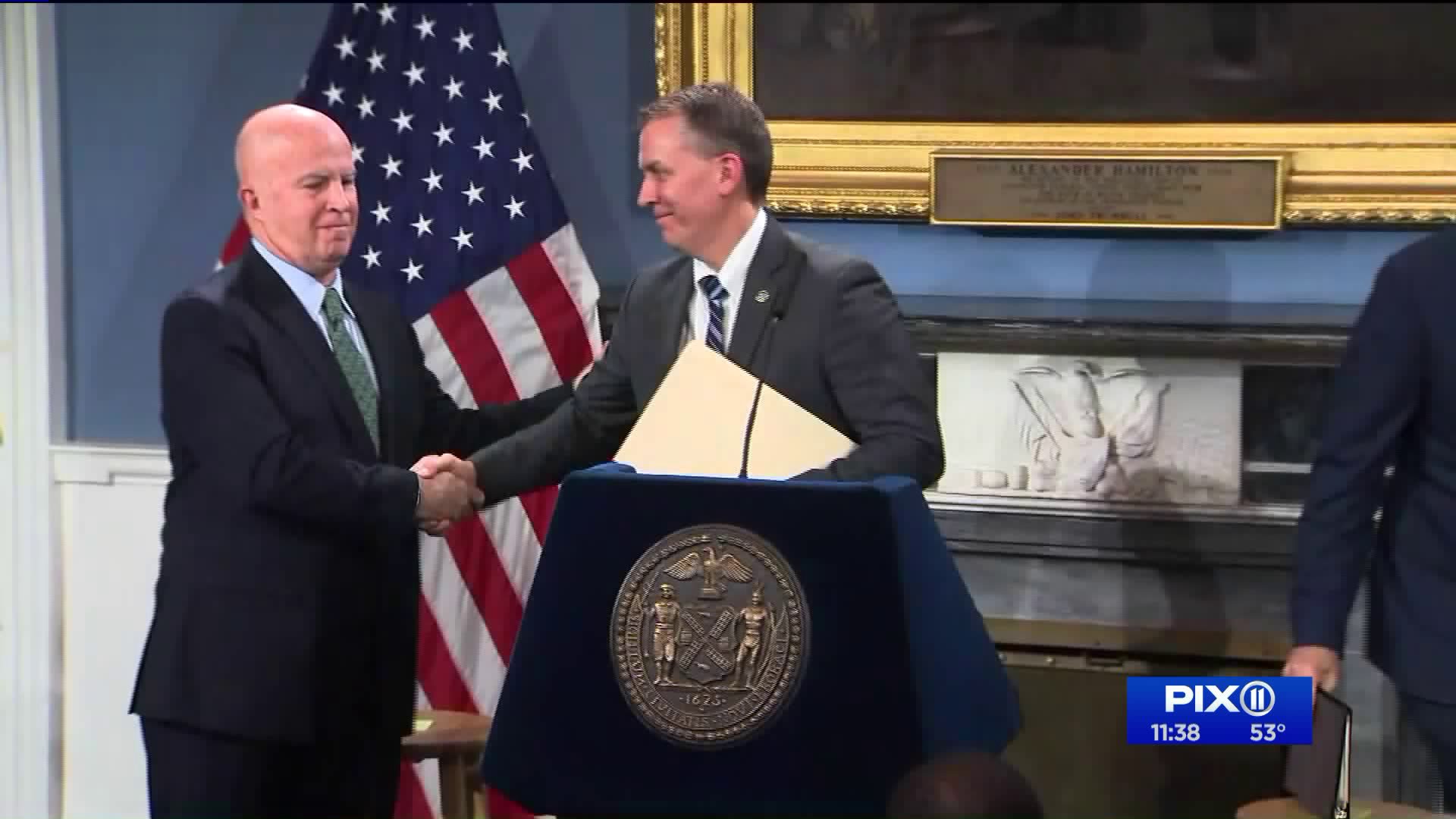 New York City Police Commissioner James O'Neill speaks during a press conference to announce the termination of officer Daniel Pantaleo on August 19, 2019 in New York City. Officer Pantaleo has been fired from the NYPD after his involvement in a chokehold related death of Eric Garner in 2014. (Drew Angerer/Getty Images)

The 35-year veteran NYPD cop will be replaced by Dermot Shea, the current chief of detectives, at the end of November. All three men attended the news conference to announce the transition.

O'Neill, 61, took on the role of top cop just over three years ago in September 2016. He's headed to the private sector, and said that he would provide more information regarding his next position "after I leave."

"New York is in great hands," O'Neill said of Shea, a 28-year veteran of the force.

Regarding the departing commissioner, Mayor de Blasio said, "Jimmy has done so many extraordinary things, I literally don't have enough time to list them all... he led a transformation that many people thought was impossible."

The news comes amid protests calling for "police accountability" in response to multiple controversial incidents involving NYPD officers using what some considered excessive force toward New Yorkers in the subway, as well as increased patrolling of subway stations to curb fare evasion.

O'Neill's announcement comes just over two months after he announced the controversial decision to fire former NYPD officer Daniel Pantaleo in the the chokehold-death of Eric Garner in July 2014.

O'Neill made the decision to fire Pantaleo after an NYPD judge recommended the officer be terminated from the force.

Asked at Monday's news conference what role that played in his own departure, Commissioner O'Neill said that it didn't play any. However, O'Neill added, "I’m not going to say it didn’t weigh on me heavily."

He said it weighed on the entire city.

Back in August, when he announced his decision on Pantaleo, O'Neill said, "I've been having to think about this since the day I was sworn in as police commissioner. "

"If I was still a cop, I'd probably be mad at me," he said back then, addressing potential negative reactions from fellow members of law enforcement.

O'Neill began his NYC law enforcement career when he joined the Transit Police in 1983.

He rose through the ranks, and became lieutenant by the time the Transit Police merged with the NYPD in 1995.

Before being named commissioner, O'Neill was the NYPD's chief of department for two years.

O'Neill's tenure as commissioner began with the pipe bomb blast in Chelsea on his first full day in office in September 2016. It came as the city continued to grapple with its place as a top terrorist target, as well as ongoing tensions between officers and the community.

He moved the department away from the controversial "broken windows" theory of law enforcement, which viewed low-level offenses as a gateway to bigger crimes, while presiding over continued drops in crime.

He led the department's response to a deadly truck attack in 2017.

A retired law enforcement source who works as a liaison between the city and state said he spoke to a supervisor at One Police Plaza today.

He said the Pantaleo decision, along with the increase in police suicides, was a factor in O’Neill deciding to leave.

“The stress is taking its toll,” the source said.

As commissioner, O'Neill led efforts to bolster community policing and repair the department's relationship with minority communities that spoke out against innocent black and Hispanic men being caught up in aggressive enforcement of minor crimes.

At times, it appeared that O'Neill was caught between loyalty to his men and women in blue and the progressive policies embraced by his boss, de Blasio, and pushed by police reform advocates, the Associated Press wrote Monday.

After O'Neill fired Pantaleo, the city's largest police union responded by calling for his immediate resignation.

Asked in recent weeks about rumors of his retirement, he said he had the "best job in the world."