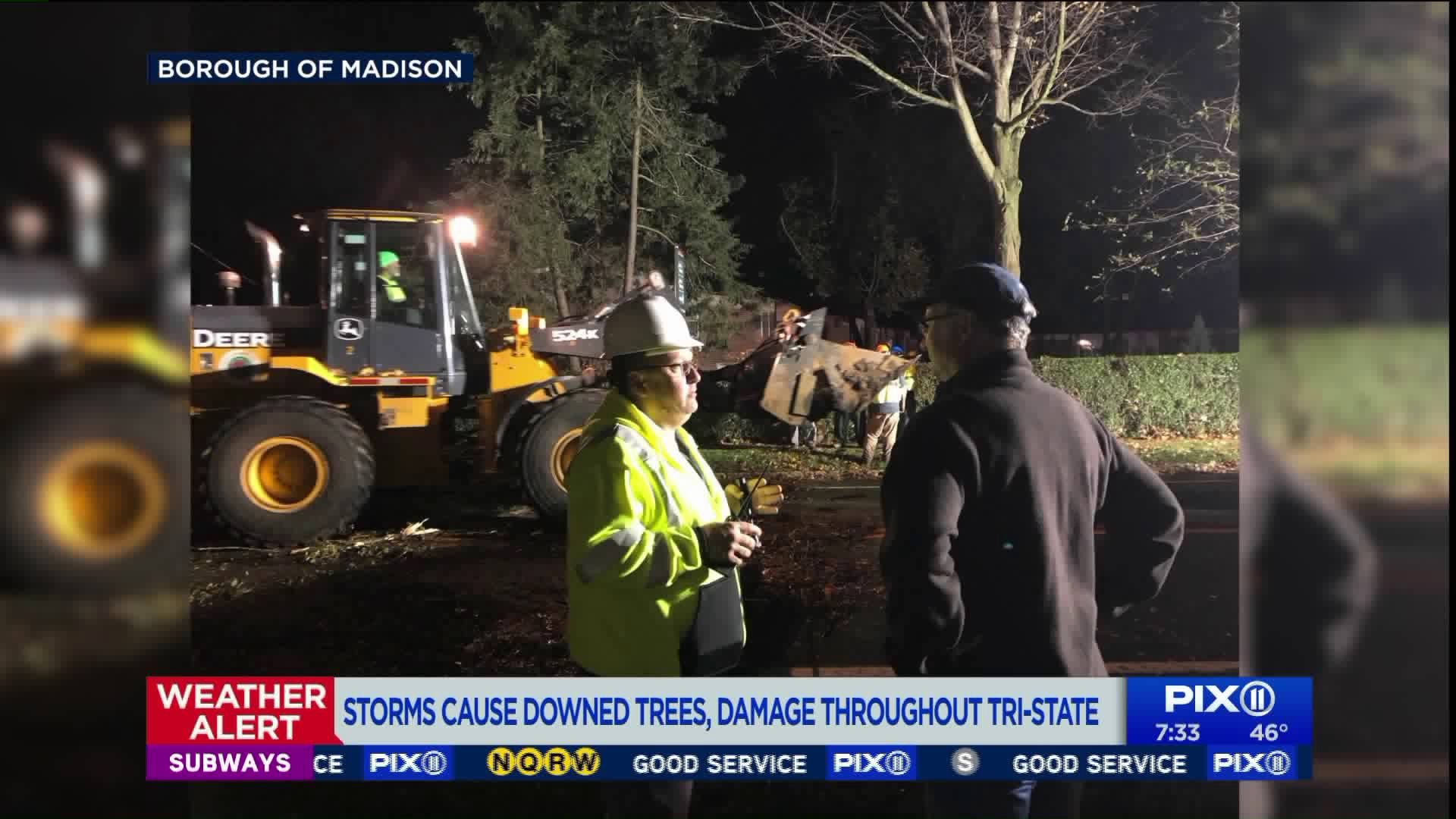 Storm clean-up and power restoriation is underway after extreme Halloween storms caused many in the tri-state area to lose power.

Thunderstorms and heavy winds rushed through the New York area on Thursday night into Friday morning, causing many in the tri-state to lose power, downed trees and a transformer catching a telephone pole on fire in Brooklyn.

There have been early reports of some damage from around the tri-state area, including what appeared to be a dangerous situation with a transformer in Brooklyn.

ConEdison confirmed that they were sending crews to 34th Street and Cropsey Avenue in Gravesend after a transformer caught a telephone pole on fire. ConEd claims 17 buildings are without power due to the explosion.

Downed trees and branches also blocked roads in New Jersey and New York, including a tree that fell on a young trick-or-treater in New Rochelle.

There's also a large tree down in Bayonne, New Jersey.

Large tree down across West 4th Street between Trask Ave and Humphrey Ave. 4th to remain CLOSED until clear. pic.twitter.com/8ix2jiMPmv

There were also trees down in Astoria, Queens.

Tree down near my apartment in Astoria due to high winds around 0505z. @NWSNewYorkNY pic.twitter.com/F686QX1VpU

Thousands in the area were without power.

As of 11:44 a.m., power outages in the city have been restored to the majority of customers. About 391 customers are without power as reported by ConEdison. There are scattered outages in Queens, Bronx and Brooklyn.

JCP&L reported outages to over 13,000 customers, with the biggest numbers in Hunterdon (2,231) and Morris (1,728); tens to hundreds without power in Burlington, Essex, Mercer, Middlesex, Monmouth, Ocean, Somerset, Sussex, Warren and Union.

PSE&G of Long Island reported just over 11,000 customers without power, including 5,479 in Nassau County and 6,381 in Suffolk County.

PSE&G of New Jersey reported over 4,100 affected customers, with the biggest numbers in Middlesex (1,713) and Essex (1,386) counties. Hundreds of customers were also affected in Bergen, Burlington, Camden, Mercer, Passaic, Somerset and Union counties.

According to PIX11 Weather, a high wind warnings have been canceled.

A wind advisory remains in effect through noon for the remainder of the tri-state area. Expect winds of 20 to 30 miles per hour with gusts up to 50 miles per hour.