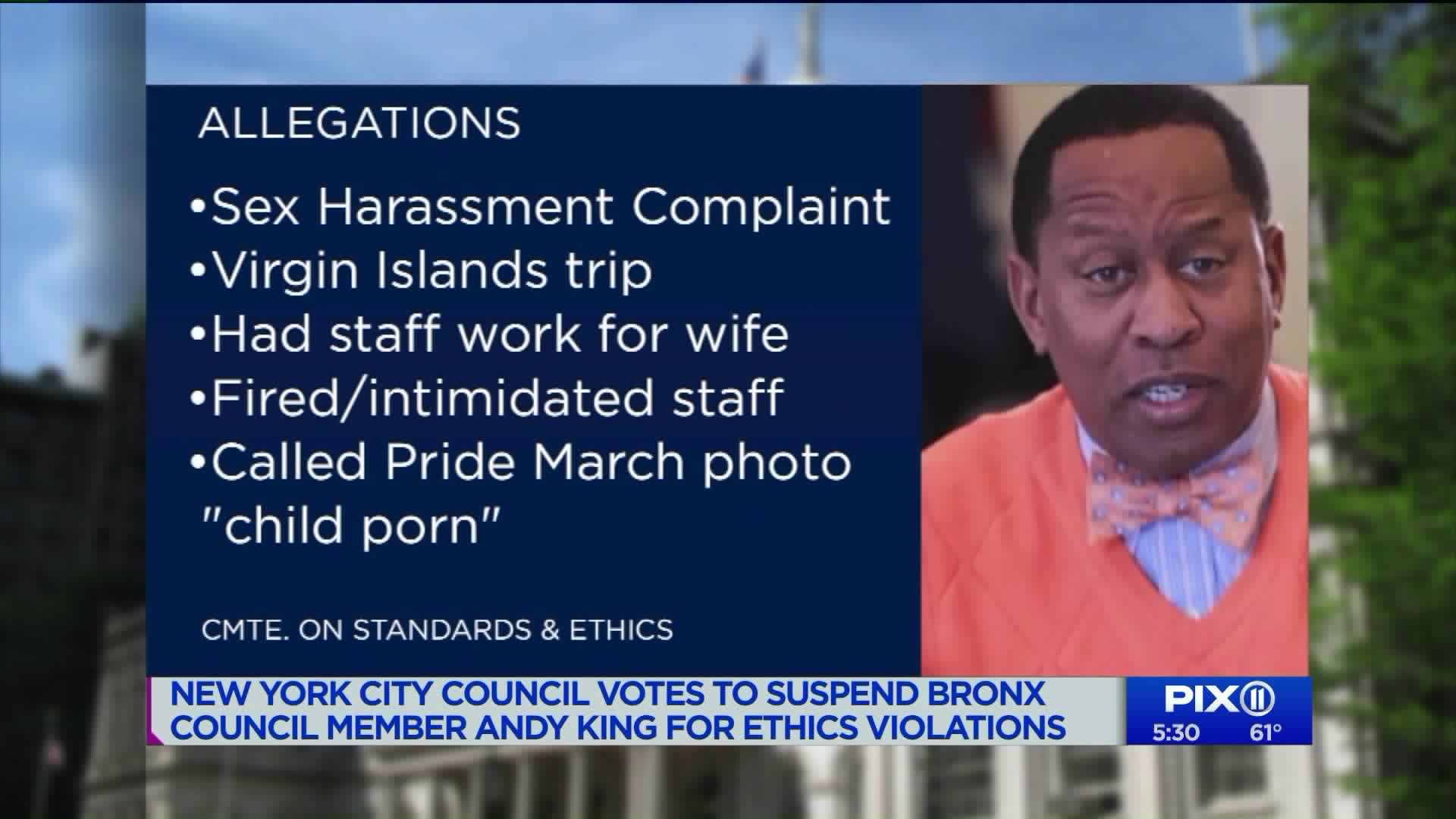 Councilmember Andy King of the Bronx sat alone as his colleagues gathered in the City Council chamber to decide his fate. An eight-month investigation by his colleagues concluded he had engaged in: sexual harassment, having his staff to work for his wife and having taxpayers pay for a trip to the Virgin Islands for himself and staff.

LOWER MANHATTAN — Sexual harassment, intimidating witnesses, obstructing justice, and other accusations are what New York City Councilmember Andy King faced as he sat in the City Council chamber on Monday in his back row seat.

None of the other members talked to him before a hearing into damning accusations against the legislator representing the central and northern Bronx.

Once the hearing began, at 2:00 in the afternoon, King was immediately on the defensive, as he faced the prospect of losing his seat immediately, or at least being suspended from it temporarily.

"My due process has been violated," King said about an eight-month investigation into him by the council's Standards and Ethics Committee, which issued a 48-page report that concluded that the councilmember had engaged in sexual harassment against a staffer, and then later identified her to other staff, when a larger investigation against him opened up.

The staffer, in an op-ed in the Daily News on Monday, called for King to be expelled from the city council.

He was also accused of having taxpayers pay for a trip to the Virgin Islands for himself and staff members, in order to attend his daughter's wedding there. Other accusations include King having his staff do office tasks for his wife, a vice president at the powerful union Local 1199 SEIU.

He also allegedly fired or intimidated staff members when a special counsel started investigating him. He's also accused of having compared a photo from the New York City Pride March to "child pornography."

In Monday's council hearing, King denied those and other allegations detailed in the committee report, calling them false.

"If you can lie about something like that, then the rest of your document is flawed," he said.

His lack of a public apology prompted more drama in the chamber on Monday afternoon, when a resolution was introduced by Councilmember Jimmy Van Bramer to expel King immediately from his job.

Some councilmembers expected few votes in favor of that measure, but the final tally saw 12 members voting in favor of expulsion, and 34 against.

It was a defeat for expulsion, but it opened further debate for a vote to suspend King temporarily from the council seat he's held since 2012.

"The easy thing for me to do is to vote yes to expel," said Corey Johnson, the council speaker. Instead, Johnson said about King, "He should resign." It's a request the speaker, as well as Mayor Bill De Blasio, have made in the recent past.

"The way he has treated staffers is unacceptable," Johnson continued on the record in council chambers on Monday, adding that King's behavior is "egregious and appalling."

For his part, King fired back about the two hours of condemnations against him.

"You've heard a lot of striking conversations" saying awful things, King told the council. "That is not the case," he continued. "I have been honorable."

In the end, his colleagues did not agree. They voted 44 to 1 (King's own vote) to accept penalties against him that the Standards and Ethics Committee had recommended, including a 30-day suspension without pay, his removal from all city council committees for at least a year, the assignment of a monitor to operate King's legislative office and supervise his employees, and a $15,000 fine.

King left the chamber through a side entrance, but did make one comment on his way out of City Hall, saying that he and his attorneys had filed an appeal of the City Council's action with the Manhattan Supreme Court.

It's not clear when a judge may make a ruling on King's request to end his suspension. It takes effect immediately.