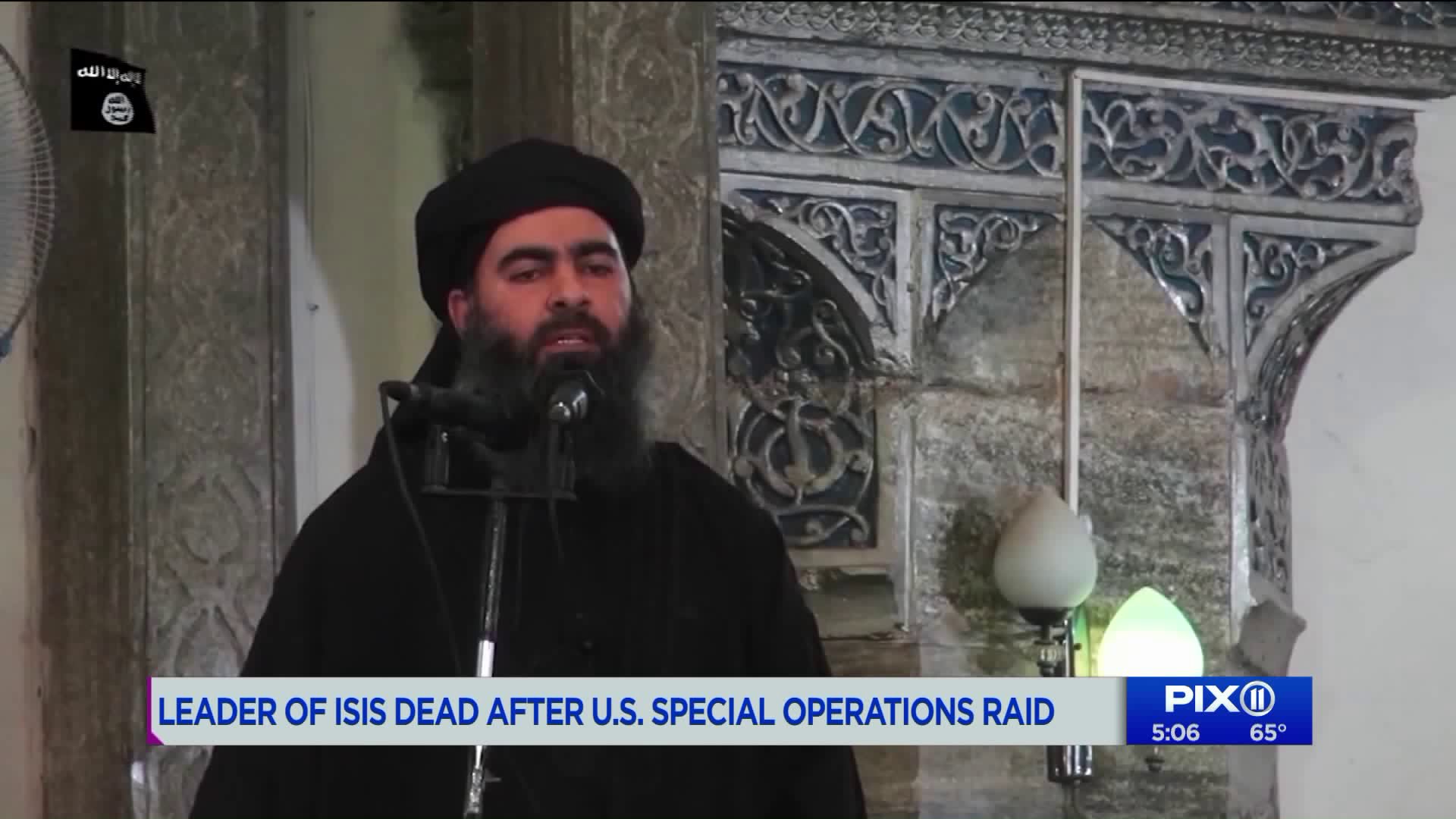 President Donald Trump announced in a Sunday morning address that Abu Bakr al-Baghdadi was killed during a U.S. military operation in Syria targeting the Islamic State group leader. Trump said the Islamic State leader detonated a suicide vest during the raid, killing himself and three of his children. 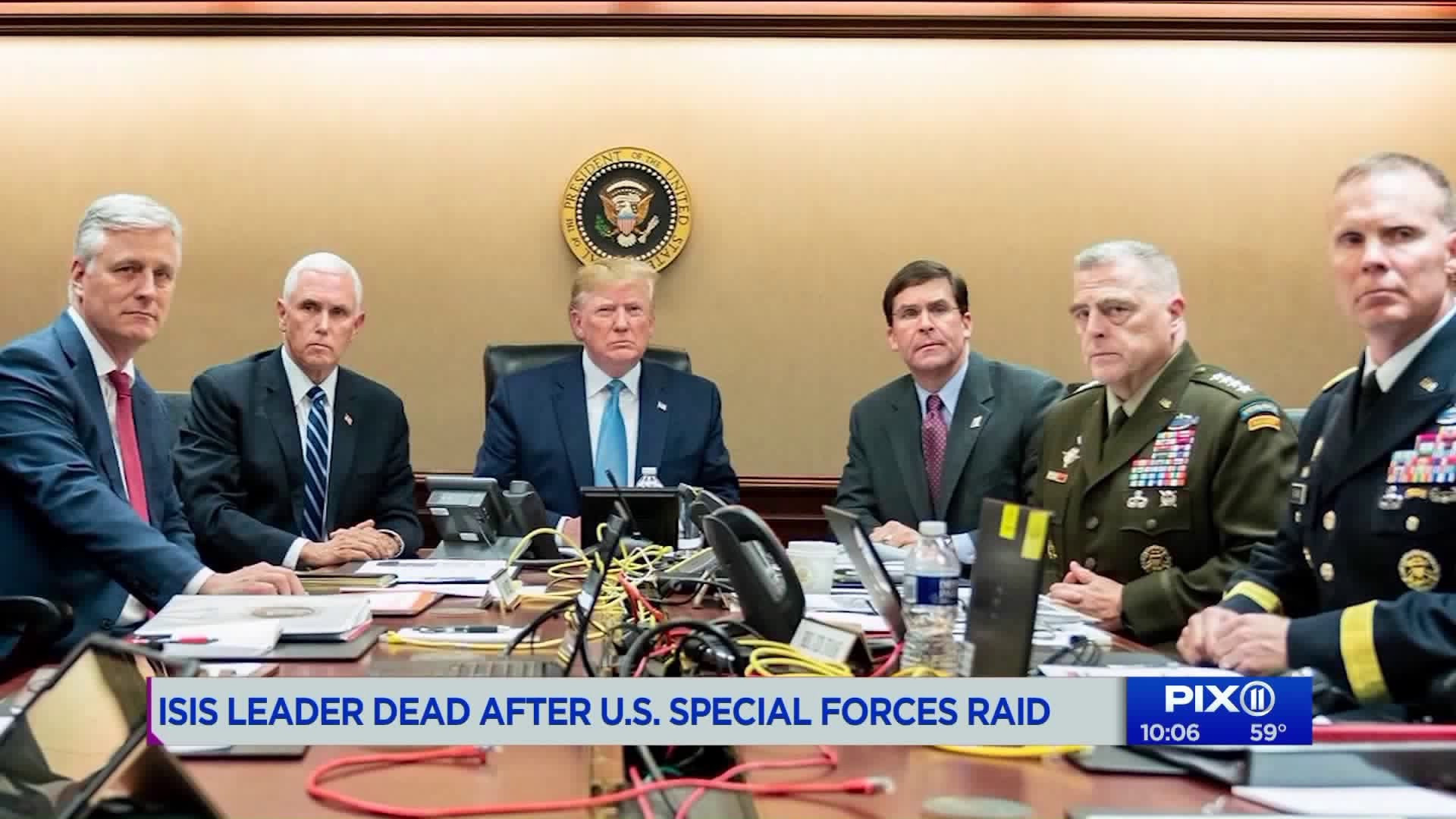 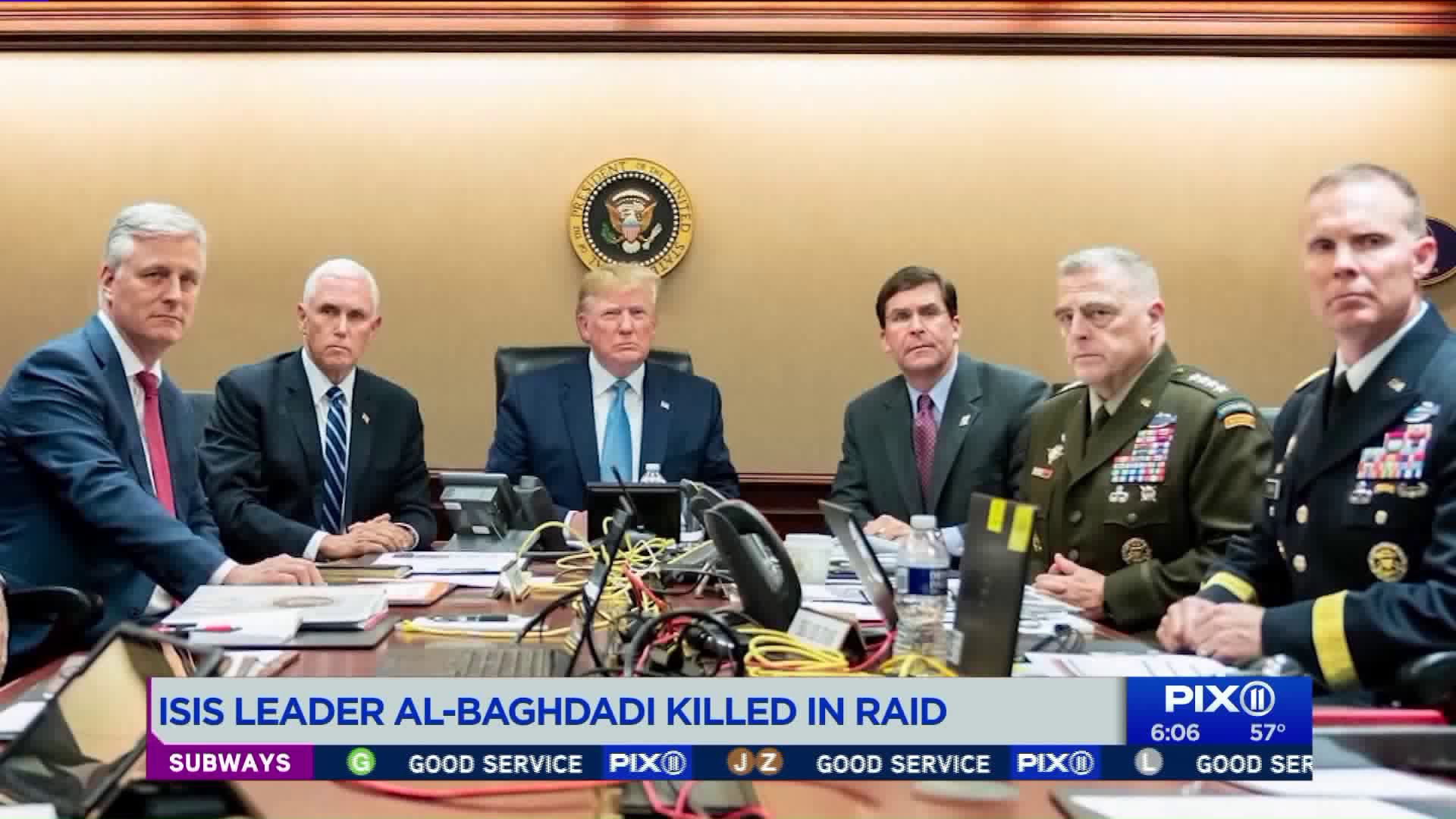 "Al-Baghdadi is dead," Trump said  in his statement to the nation from the White House's Diplomatic Room, fulfilling the top national security priority of his administration.

The president confirmed that no U.S. personnel were lost in the mission.

Trump said the Islamic State leader detonated a suicide vest during the raid, killing himself and three of his children.

According to the president, debris from the tunnel where al-Baghdadi blew himself up made it difficult to get to his body. However, Trump said Americans were able to move the debris and eventually confirm al-Baghdadi's identity with on-site DNA.

During Sunday's address, Trump said watching the raid as it was underway felt "as though you were watching a movie."

Trump watched much of the mission unfold from the White House Situation Room on Saturday night, he said.

The president also suggested that the footage of the raid be released publicly so that the world knows al-Baghdadi spent his final moments "crying, "whimpering" and "screaming."

The U.S. had al-Baghdadi under surveillance for several weeks, Trump said.

After detailing the raid that took out the Islamic State leader, Trump said it is a bigger deal than the 2011 killing of Osama bin Laden during the Obama administration.

The president acknowledges that the death of bin Laden was significant, but he believes the news about al-Baghdadi is even bigger news.

Trump says that bin Laden didn't become a global name in terrorism until the attacks of Sept. 11, 2001. The president says that's in contrast to al-Baghdadi, who Trump says is responsible for building a caliphate.

The announcement comes as Trump has been on the receiving end of bipartisan criticism in Washington following the recent pullback of U.S. troops from northeastern Syria. Critics fear that move will allow the militant group to regain strength after it had lost vast stretches of territory it had once controlled

The commander of the Syrian Kurdish-led forces says five months of joint intelligence cooperation with the U.S.-led coalition led to the killing of the leader of the Islamic State group.

Mazloum Abdi said in a tweet Sunday that the reported killing of Abu Bakr al-Baghdadi took place in a joint operation following "cooperation on the ground and accurate monitoring" for five months. He called it a "successful and historic" joint intelligence work with the U.S.

The U.S. raid with helicopters took place in the Barisha area north of Idlib city a few kilometers from the Turkish border.

The Kurdish-led forces cooperated with the U.S.-coalition for at least four years to fight IS in Syria until they declared military victory against the group in March.

Al-Baghdadi has led IS for the last five years, presiding over its ascendancy as it cultivated a reputation for beheadings and attracted hundreds of thousands of followers to a sprawling and self-styled caliphate in Iraq and Syria. He remained among the few IS commanders still at large despite multiple claims in recent years about his death and even as his so-called caliphate dramatically shrank, with many supporters who joined the cause either imprisoned or jailed.

His exhortations were instrumental in inspiring terrorist attacks in the heart of Europe and in the United States. Shifting away from the airline hijackings and other mass-casualty attacks that came to define al-Qaida, al-Baghdadi and other IS leaders supported smaller-scale acts of violence that would be harder for law enforcement to prepare for and prevent.

They encouraged jihadists who could not travel to the caliphate to kill where they were, with whatever weapon they had at their disposal. In the U.S., multiple extremists have pledged their allegiance to al-Baghdadi on social media, including a woman who along with her husband committed a 2015 massacre at a holiday party in San Bernardino, California.

With a $25 million U.S. bounty on his head, al-Baghdadi has been far less visible in recent years, releasing only sporadic audio recordings, including one just last month in which he called on members of the extremist group to do all they could to free IS detainees and women held in jails and camps.

The purported audio was his first public statement since last April, when he appeared in a video for the first time in five years.

In 2014, he was a black-robed figure delivering a sermon from the pulpit of Mosul's Great Mosque of al-Nuri, his only known public appearance. He urged Muslims around the world to swear allegiance to the caliphate and obey him as its leader.

Though at minimum a symbolic victory for Western counterterrorism efforts, his death would have unknown practical impact on possible future attacks. He had been largely regarded as a symbolic figurehead of the global terror network, and was described as "irrelevant for a long time" by a coalition spokesman in 2017.

Al-Baghdadi was born Ibrahim Awwad Ibrahim Ali al-Badri al-Samarrai in 1971 in Samarra, Iraq, and adopted his nom de guerre early on. Because of anti-U.S. militant activity, he was detained by U.S. forces in Iraq and sent to Bucca prison in February 2004, according to IS-affiliated websites.

He was released 10 months later, after which he joined the al-Qaida branch in Iraq of Abu Musab al-Zarqawi. He later assumed control of the group, known at the time as the Islamic State of Iraq.

After Syria's civil war erupted in 2011, al-Baghdadi set about pursuing a plan for a medieval-style Islamic State, or caliphate. He merged a group known as the Nusra Front, which initially welcomed moderate Sunni rebels who were part of the uprising against Syrian President Bashar Assad, with a new one known as the Islamic State of Iraq and the Levant. Al-Qaida's central leadership refused to accept the takeover and broke with al-Baghdadi.

Al-Baghdadi's fighters captured a contiguous stretch of territory across Iraq and Syria, including key cities, and in June 2014, it announced its own state — or caliphate. Al-Baghdadi became the declared caliph of the newly renamed Islamic State group. Under his leadership, the group became known for macabre massacres and beheadings —often posted online on militant websites — and a strict adherence to an extreme interpretation of Islamic law.

Over the years, he has been reported multiple times to have been killed, but none has been confirmed. In 2017, Russian officials said there was a "high probability" he had been killed in a Russian airstrike on the outskirts of Raqqa, but U.S. officials later said they believed he was still alive.