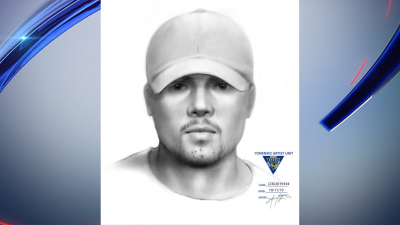 A new sketch of a potential witness in the case of a missing 5-year-old New Jersey girl was released by the county prosecutor Tuesday. Dulce Maria Alavez went missing from the Bridgeton City Park Recreational Area on Sept. 16 just before 5 p.m., officials said.

BRIDGETON, N.J. — A new sketch of a potential witness in the case of a missing 5-year-old New Jersey girl was released by the county prosecutor Tuesday.

Officials released this composite sketch of a possible witness in the disappearance of Dulce Maria Alavez.

Tuesday, the Cumberland County prosecutor's office released a composite sketch of a man who they say was reportedly seen in the park around the time Dulce went missing. Officials said he was reportedly with one or two children under the age of five.

Now, the prosecutor's office is asking the person in the sketch — or anyone who may recognize him — to come forward. Investigators believe he may have information that they said would be helpful in determining the circumstances that led to Alavez's disappearance.

Officials said they are not referring to the man as a suspect or person of interest.

Anyone who can identify this individual or who has information about the case is asked to contact Bridgeton Police Department at 856-451-0033.  The public is reminded that authorities will not question any witness about their immigration status.  Information may be supplied anonymously by texting TIP411 subtext Bridgeton.