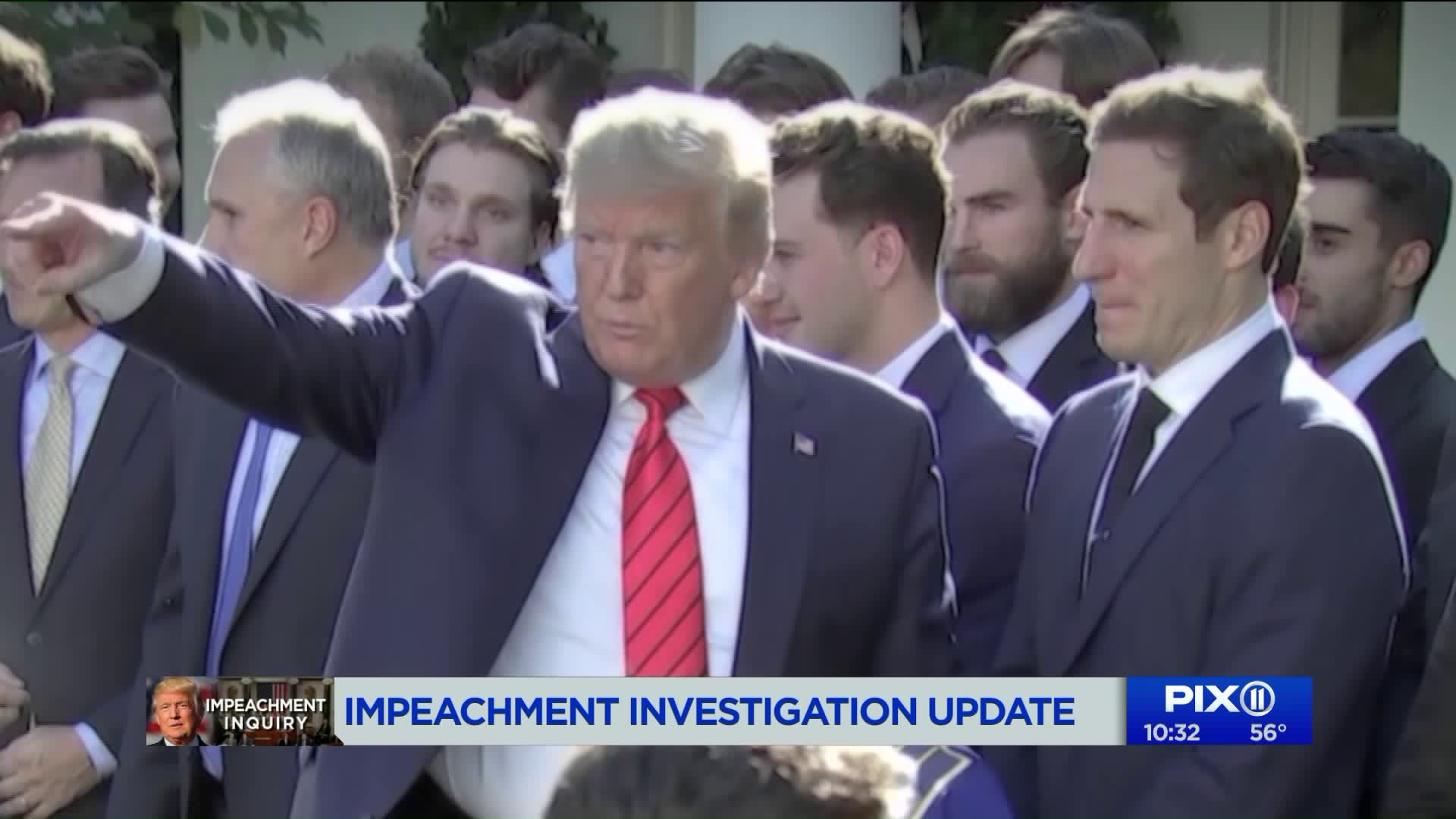 The latest on the impeachment inquiry as President Trump`s opponents on the Democratic debate stage all come out in favor of the inquiry.

WESTERVILLE, Ohio — Democrats opened Tuesday's largest-ever presidential debate lining up in favor of President Donald Trump's impeachment, hammering him for what they called corruption and lawlessness.

The 12 Democratic candidates fighting for the presidential nomination line up on stage before their party's fourth debate.

"Sometimes there are issues that are bigger than politics," Massachusetts Sen. Elizabeth Warren said. Sen. Bernie Sanders of Vermont said impeachment was the only choice for "the most corrupt president in the history of this country." Former Vice President Joe Biden added, "I agree with Bernie, Sen. Sanders," and the rest of the crowded field followed suit.

There was expected to be more disagreement later in the night, though.

Biden has been at the top of the crowded field for months but is having to answer persistent questions about his 49-year-old son, Hunter. Warren has climbed to co-front runner is likely to face new questions about a key piece of the biographical story she tells voters, being fired from a teaching job nearly five decades ago for being "visibly pregnant."

And Sanders is out to prove he has the stamina for hours on stage, less than two weeks after a heart attack forced him to temporarily suspend campaigning.

The other candidates struggling just to get noticed — trying to make up ground in a race that kicks off officially in just over three months with the Iowa caucuses on Feb. 3.

Hosted by CNN and The New York Times, the field's fourth round of debates comes as the impeachment inquiry against President Donald Trump has grabbed most of the nation's political attention and left the Democratic race for the White House largely overshadowed.

It took place on the campus of Otterbein University, just outside Columbus in Ohio, one of the nation's toughest electoral battlegrounds, but also a state that has long helped decide presidential elections but has drifted away from Democrats in recent years.

Without providing evidence, Trump has repeatedly said that Biden's son improperly profited from work in Ukraine and China while the elder Biden was vice president. The president also insists that Biden used his office to protect his son from allegations of wrongdoing.

Biden's Democratic rivals have united in criticizing Trump, but the 76-year-old former vice president himself is facing pressure to provide explanations.

So likely will Warren, 70. She's faced questions from opponents about if she was actually forced from her teaching job because of a pregnancy nearly a half century ago, a claim that has become a core part of her personal message. Critics have pointed to past speeches and documents that suggest she left on her own. Warren is standing by her story.

The 78-year-old Sanders, meanwhile, spent most of the last two week recuperating in Vermont after doctors inserted two stents put in to clear a clogged artery. He's planning to use the debate to show he's fully recovered before formally rejoin the race with a rally in New York on Saturday.