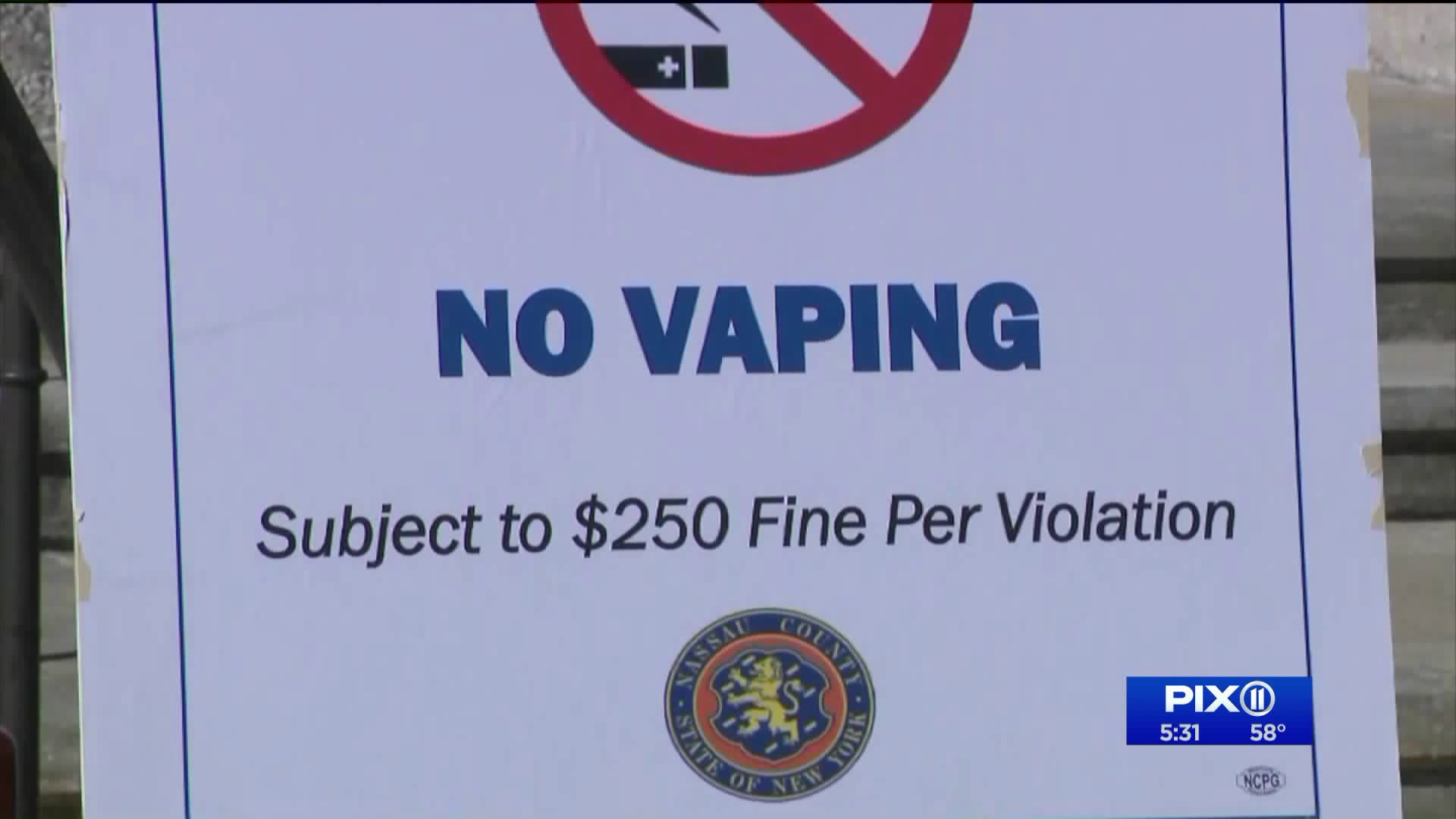 There are now more than 1,000 cases of vaping-related lung injuries across the United States, according to the US Centers for Disease Control and Prevention. Nassau County lawmakers are taking things into their own hands.

EAST MEADOW, Long Island — The issue of the hazards of vaping is one in which new developments — including new health concerns — arise daily.

On Friday, there were multiple significant new developments, including a consumer alert from the FDA telling people who vape to not use any vaping products containing THC, a cannabis-based component that's been present in the majority of vaping-related illnesses.

Friday was also supposed to be the first day of a ban on flavored e-cigarettes across New York state. However, because of a legal dispute, the ban was delayed. That didn't prevent some other local leaders, however, from generating another news element, as they launched new legislation designed to stop vaping altogether in some places.

One of those places is where Nancy Wasek spent her afternoon, with her two year-old granddaughter. They were enjoying playing on a swingset together in Eisenhower Park here.

Wasek spoke with PIX11 News about the vaping illness issue because of proposed legislation affecting Nassau County, where she and her granddaughter live.

"My son, unfortunately, vaped," Wasek said, "although he's slowly stopping it because of everything that's going on," she added.

Another grandmother, Jane Sato, also talked about the dangers of vaping.

"How many kids have died in the past couple of months because of it?" Sato asked.

Both women had some awareness of the latest figures on the hazards of vaping. In the U.S. alone, the number of vaping related deaths is now at 20. The latest fatal case was reported on Friday, in Pennsylvania. The one before that was reported earlier this week in New Jersey.

At least 1,080 illnesses from vaping are also reported nationwide, according to the Centers for Disease Control. 275 of the vaping-related illnesses were reported in the last week alone.

It's part of the reason why legislators in Nassau County, on Long Island, said that they need to take action now.

The measure has the strong backing of the American Academy of Pediatrics.

"We have written letters to schools as 12 year olds have to chew nicotine replacement gum," said Dr. Shetal Shah, the Nassau County president of the American Academy of Pediatrics, "because they have become addicted and will suffer nicotine withdrawal symptoms if they're not allowed to chew."

The proposed vaping and smoking ban is thought to have a good chance of becoming law, because it has the backing of Nassau County Executive Laura Curran.

She pointed out two things: that currently, a ban on smoking in parks is in Nassau County guidelines, but it's not the law. The proposed law would ban both smoking and vaping in Nassau County parks.

The county proposal came a day after New Jersey's governor proposed banning flavored vapes in his state, and it also came on the day that such a ban was to take effect across New York State. A court challenge by the vaping industry stopped that ban, at least for now.

"If the state does [prevail]," Curran said at a morning news conference, where Legislator Mulé and Dr. Shah were present, "that's great, that's wonderful. We fully support that."

"But in the meantime, " she continued, "we need to get it done here."

Park goers we met agreed with that statement, provided one other thing happens.

"If it gets enforced, it'll be effective," said Steve Vella, as he carried out his regular power walk in Eisenhower Park. "If not, it's like anything else."

The county ban would carry a $250 fine per offense. However, a parks administrator said, a ban would largely be enforced by park goers.

As for the New York state flavored e-cig ban, it has a hearing in appeals court on October 18th.