14th Street busway launches: What’s the fastest way to get across the city? PIX11 tests the options 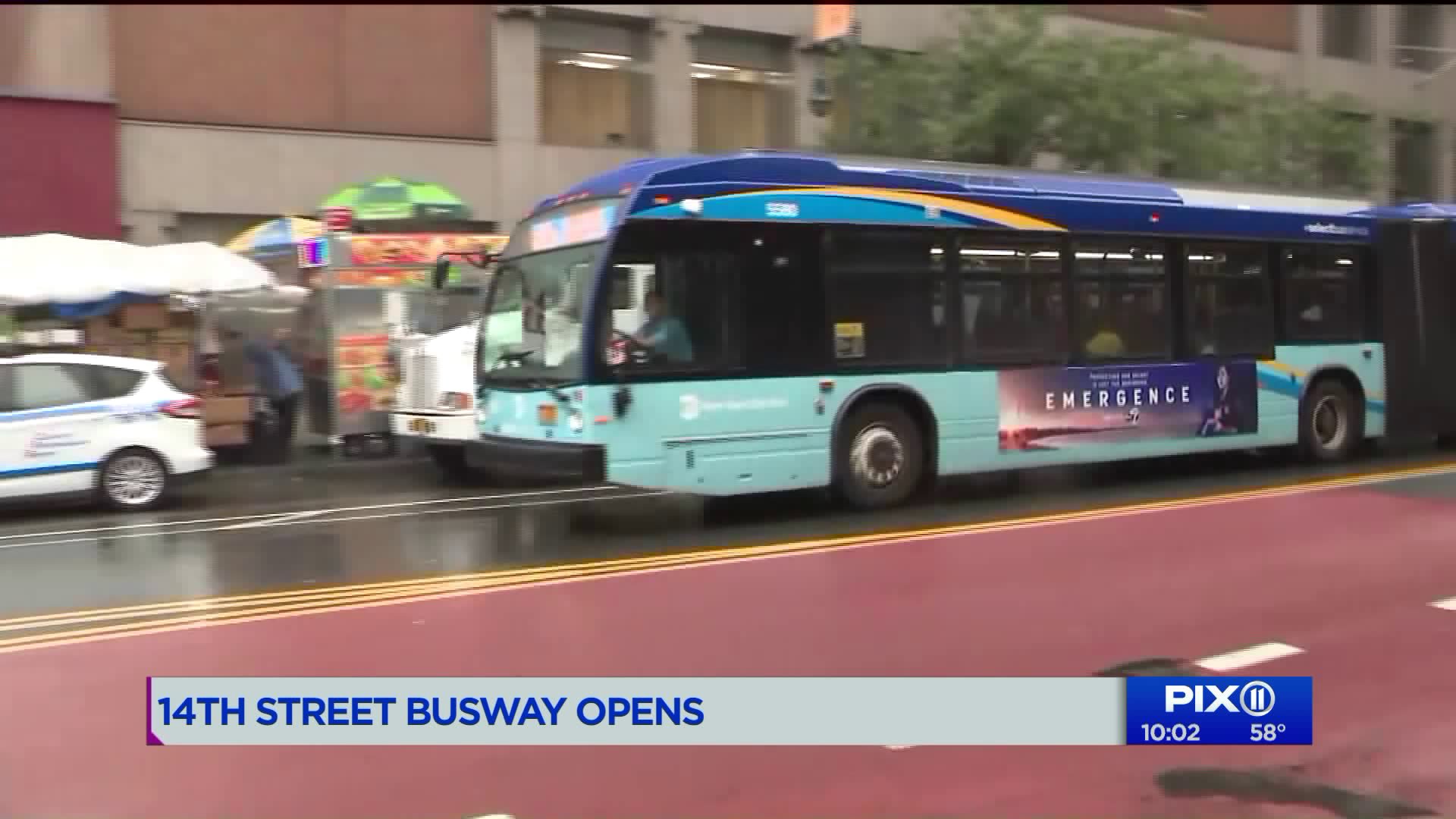 Thursday`s plan implementation will come after months of protests, as well as a temporary restraining order against the change, which was supposed to start last summer. 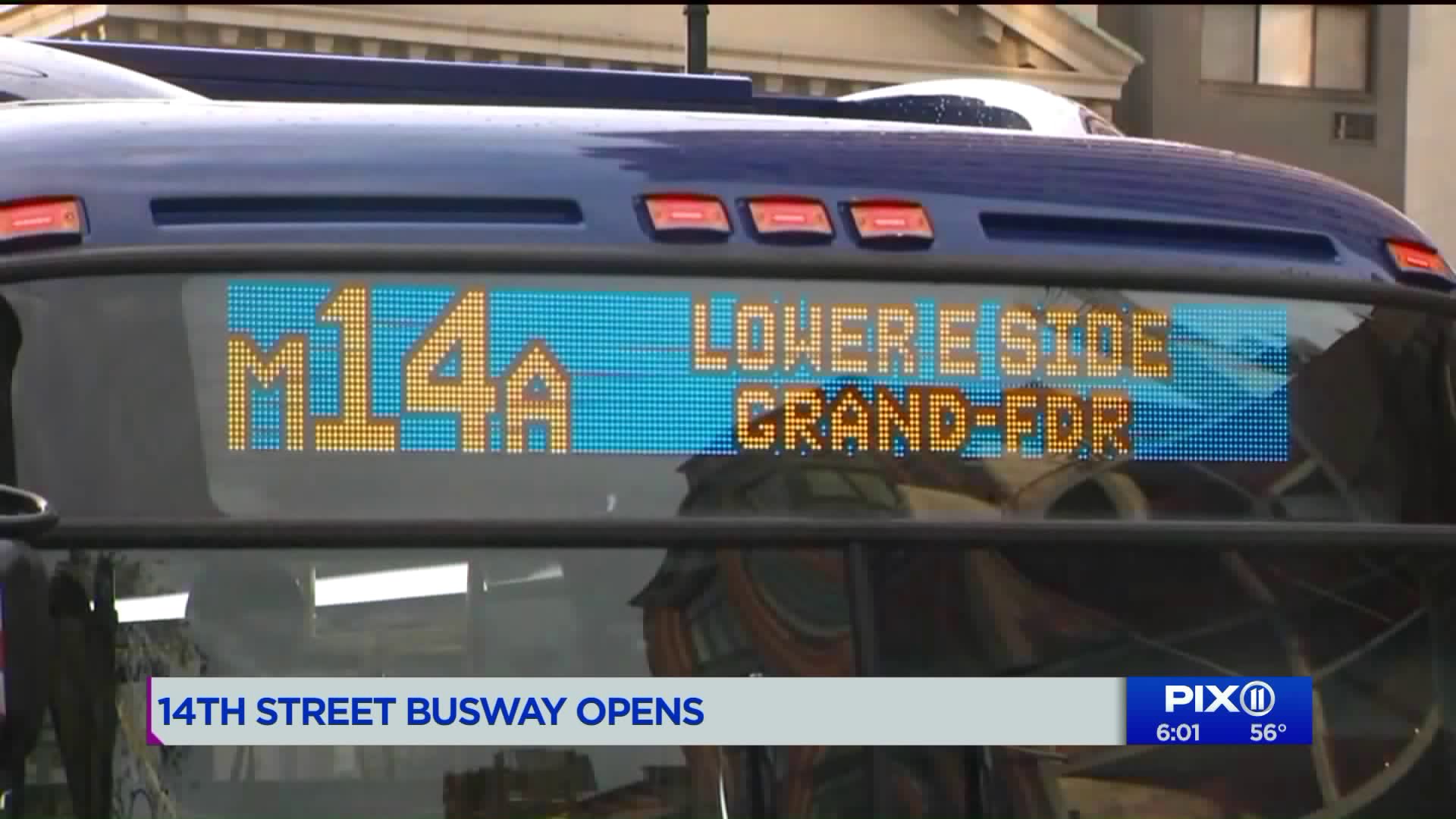 UNION SQUARE, Manhattan -- It's been years in the making, and has been the subject of a legal dispute for almost as long. On Thursday, the so-called 14th Street Busway -- the closure of 14th Street in Manhattan to cars and almost all vehicles, except for buses -- became reality.

The plan was hatched in 2016, when the MTA concluded that it would need to shut down the L train subway line for 18 months long-term renovations and repairs. The L train runs along 14th Street. The original plan was for the 14th Street car ban to serve as an alternative to the closed down subway. Earlier this year, Governor Andrew Cuomo announced that the L train would not have to be fully closed, but Mayor Bill de Blasio decided to keep the 14th Street car ban anyway.

It's intended to make the cross-town route -- one of the busiest thoroughfares in the country -- more accessible to mass transit, emergency vehicles, and heavy trucks.

Some neighborhood groups in parts of Manhattan near the 14th Street corridor have protested the proposed street closure since it was first announced. They filed a lawsuit against the city, to force the prevention of the car ban. They'd argued, through their attorney, Arthur Schwartz, that the closure plan would clog nearby streets.

The legal case stalled the implementation of the car ban, which had been originally slated to begin this past summer. However, late last month, a majority on a panel of appellate judges ruled that the car ban could proceed while a lawsuit against it continues going through the court system.

In the meantime, the car ban proceeds, and PIX11 News tested its speed (or lack thereof), and also tested the speed of traffic on neighboring streets.

In a timed test of walking versus driving, PIX11 News found that a leisurely walk across town on alternative streets to 14th Street took 20 minutes and 46 seconds. A drive across the same route took 25 minutes and 13 seconds.

Compared to the bus, those times are slow, but maybe not quite as slow as some might assume.

PIX11 News rode the M-14 SBS in both directions. From east to west, the trip was 11 minutes and 56 seconds. From west to east, it was nearly five minutes longer -- 16 minutes and 36 seconds.

Passengers on the bus who spoke with PIX11 News all had similar assessments of the new M-14 bus time.

"It's a little bit faster," one woman said.

Others echoed her conclusion. One woman said that the crosstown route used to take 20 minutes, before cars were banned on 14th Street.

Meanwhile, the crosstown trip on neighboring streets -- 12th, 13th, 15th, and 16th -- were slightly longer in duration, which was not pleasing any of the drivers.

"It took me about three minutes to go one crosstown avenue," a driver making deliveries said, from behind the wheel.

A crosstown avenue block is about 750 feet, or the same distance as two-and-a-half football fields.

Another driver, in a truck, said that he was upset that he couldn't drive on 14th Street.

In contrast, an ambulance sped down a wide open 14th Street with its siren and lights on, as one of the primary activists behind the car ban answered critics.

The speeding ambulance, Thomas Devito, senior advocacy director at Transportation Alternatives, said, shows that "we can prioritize who gets space on our streets."

"Is it an SUV driver who double parks to get coffee?" he asked, "or is it that ambulance that needs to get through? Is it the 40 to 60 people on these articulated buses that need to get through? The city answered correctly," he said.

For the next two months, the city will give warnings to vehicles in violation of the ban. After that, it will issue $50 tickets for first offenses. Subsequent violations will result in increased fines, up to a $250 ticket for a violation.