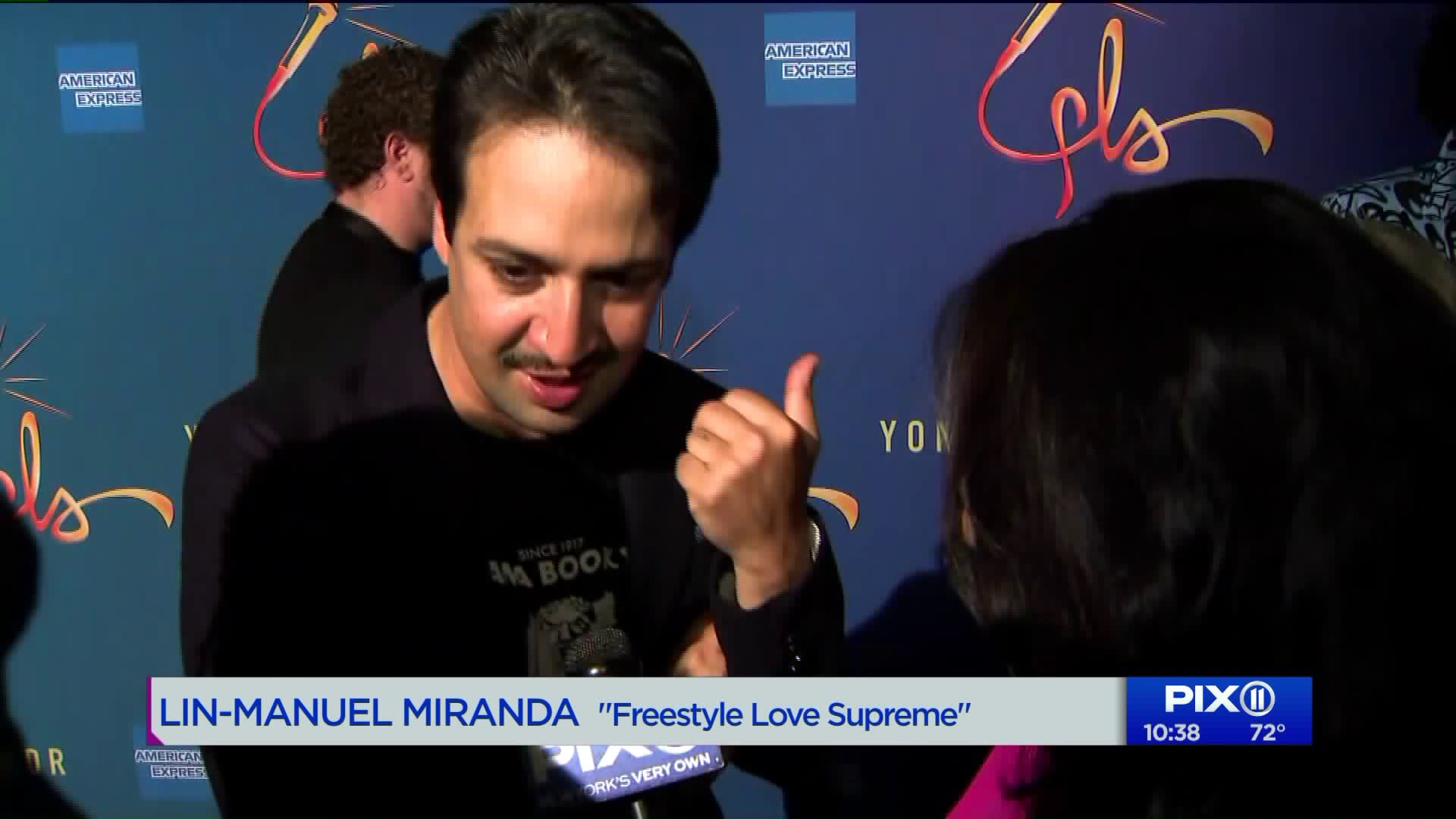 The show ran off Broadway last winter and has been playing in Washington, DC, as part of the Kennedy Center series. Miranda will make unscheduled appearances during its 16-week run. Other occasional performers for the Broadway run include Christopher Jackson, Wayne Brady and Daveed Diggs -- who played George Washington, Aaron Burr and Thomas Jefferson in "Hamilton," respectively.

MANHATTAN — “Hamilton” creator and star Lin-Manuel Miranda is back on the Great White Way.

“It changes every night the audience brings us new ingredients we make the meal from scratch it’s fantastic,” said Miranda.

Long before “Hamilton” and “In the Heights” made him famous - Miranda co-founded the freestyle rap troupe. They performed in small scale venues. Wednesday night he took it to Broadway, opening at Booth Theater.

The stars were out to support him including Hamilton co-star Renee Goldsberry. “I came here for my brain to explode because that’s what’s gonna happen and to support my friends and to make new friends,” said Goldsberry.
When asked if she’s ever done improv: “I did in college and it was frightening.”

Here’s how the show works. The performers will make up raps on the spot, after taking suggestions from the audience. It could be one word or a phrase or a theme and the actors then jump off of that and do improv.

“I actually started in improv when I was in L.A. growing up and doing theater I was part of improv troupes,” said singer-songwriter Josh Groban. “It’s great to be scared like that and work that muscle and say yes to everything that comes at you.”

“I like having the text in front of me therefore I revere anyone who does that form of storytelling it’s phenomenal,” said actress Anna Chlumsky

“Freestyle Love Supreme” is made up of core members and also a rotating cast. In fact, some nights during its run, Miranda himself is expected to pop up in unscheduled appearances.

He performed opening night
Miranda has said his first time performing in New York was with the hip-hop group. In fact the group started in 2003.

“Our hope is we play the show on Broadway and then we get to take it on the road and come back to Broadway in the future,” said Thomas Kail, a producer and co-creator of “Freestyle Love Supreme.”

This is a limited engagement. It will be at Booth Theater until Jan 5 2020. Like the Hamilton lottery there is a digital lottery for $35 tickets to “Freestyle Love Supreme.”

“It’s the only project I work on that every time I finish the show I have more energy than when I started and that’s how I want the audience to feel just energized and heard,” said Miranda.