NYC will ban cars on one its busiest streets this week; why drivers are unhappy and pedestrians rejoice 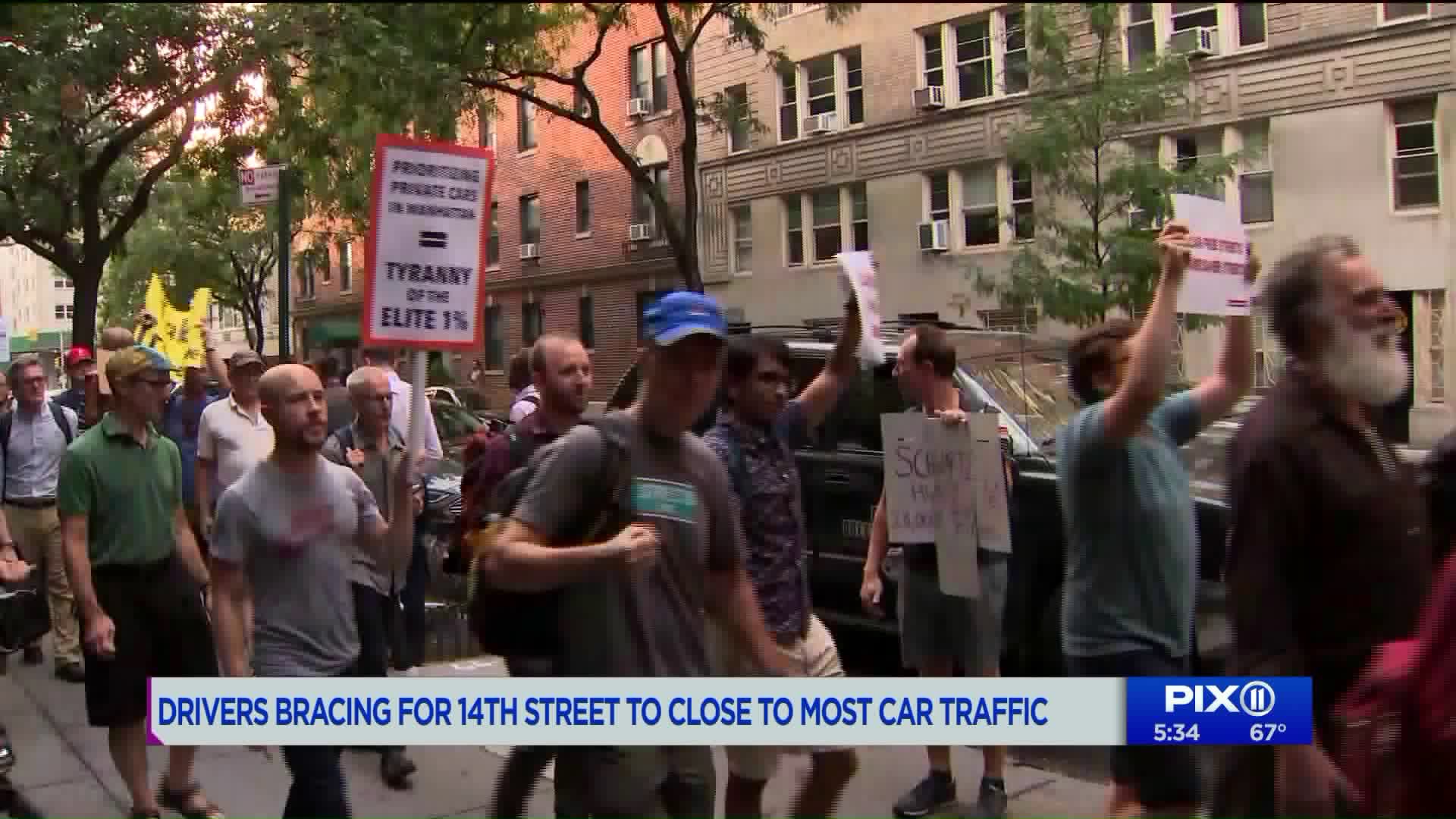 It has been a legal issue for months and a controversy for much longer, but now the countdown begins to one of the city`s main streets being closed to most cars.

UNION SQUARE, Manhattan — It's been at the center of an ongoing legal battle for months, and has been controversial for even longer.

This week, though, a proposal to eliminate personal car traffic on one of the city's busiest cross-town routes, 14th Street, is set to become a reality.

Starting on Thursday, the street that had had a trolley running along it until 90 years ago, is set to have its most dramatic traffic change since then.

In contrast was Thomas Mason's reaction.

"That don't seem good," said Mason, from behind the wheel of his silver sedan, parked in the far right, Eastbound lane.

They represented both ends of the spectrum of opinion on the remaking of the street. It's a temporary change that may become permanent.

Thursday will be the first day that no passenger cars will be allowed on 14th Street from Third Avenue to Ninth Avenue, seven days a week, from 6:00 a.m. to 10:00 p.m.

"I think this'll be good for us that are working hard," said George Rios. He was sitting in the driver's seat of his work van, on his way across town on 14th Street to nearby Con Edison headquarters, for which he's a contractor.

He was convinced that he'll be exempt from the personal vehicle ban because he uses 14th Street for work.

The restriction will apply to all vehicles except for trucks, buses, and emergency vehicles. Personal vehicles will be allowed to be on 14th Street for pick-ups and drop-offs only, and to access parking garages.

"It's a bad thing," Myrna Reyes told PIX11 News, as she was getting out of the passenger side of her SUV. She and her family had driven to the Union Square neighborhood from the Bronx on an excursion to enjoy the Nutella restaurant nearby.

"I don't think they should restrict anyone to pass through here during those times," Reyes said, adding that the change would restrict people like her and her family from driving in to Manhattan to patronize local businesses.

However, a variety of local pedestrians disagreed.

"I think it's fantastic." Kirtia Stout said about the proposed change. "New York City is a pedestrian town," he added. "I've lived here all my life."

He said that the change will allow more foot traffic for businesses.

Thursday's plan implementation will come after months of protests, as well as a temporary restraining order against the change, which was supposed to start last summer.

Last Friday, however, a majority of judges on an appeals panel ruled that the plan could go ahead while it's being fought in court. Opponents, led by attorney Arthur Schwartz, have argued that the restriction of cars on 14th Street will push more cars onto other, neighboring streets.

Schwartz did not respond to a request for comment from PIX11 News.

The main advocacy group for the plan did respond, however, to an inquiry from PIX11 News. Transportation Alternatives has long lobbied for the 14th Street vehicle restriction in order to create a busway, as the organization calls it, which, it argues, would move people faster across town, on the M14 select bus, than they do currently.

The M14 has regularly clocked in as the slowest bus in the city, according to the advocacy group, and the Dept. of Transportation.

"New Yorkers who ride the M14 are about to see their bus line transformed from one of the city's slowest, into one of the fastest, practically overnight," Transportation Alternatives' senior director of advocacy, Thomas DeVito, said in a statement. "This should bring an end to the legal shenanigans that have been holding up these improvements for months on end," DeVito said.

A pedestrian added that the change promotes a more village-like feel along the corridor that abuts the Greenwich Village and Chelsea neighborhoods.

"I've lived in a lot of European cities," said Leslie Helpert, "where they have more ramblas," or walking streets. "It makes for more community, on some level," she said.

The lawsuit against the city over the restricted access continues. If appellate judges rule that the busway restrictions are illegal, the restrictions will end. Otherwise, if the city concludes, after 18 months, that the changes have reduced congestion significantly, the vehicle restrictions could become permanent.