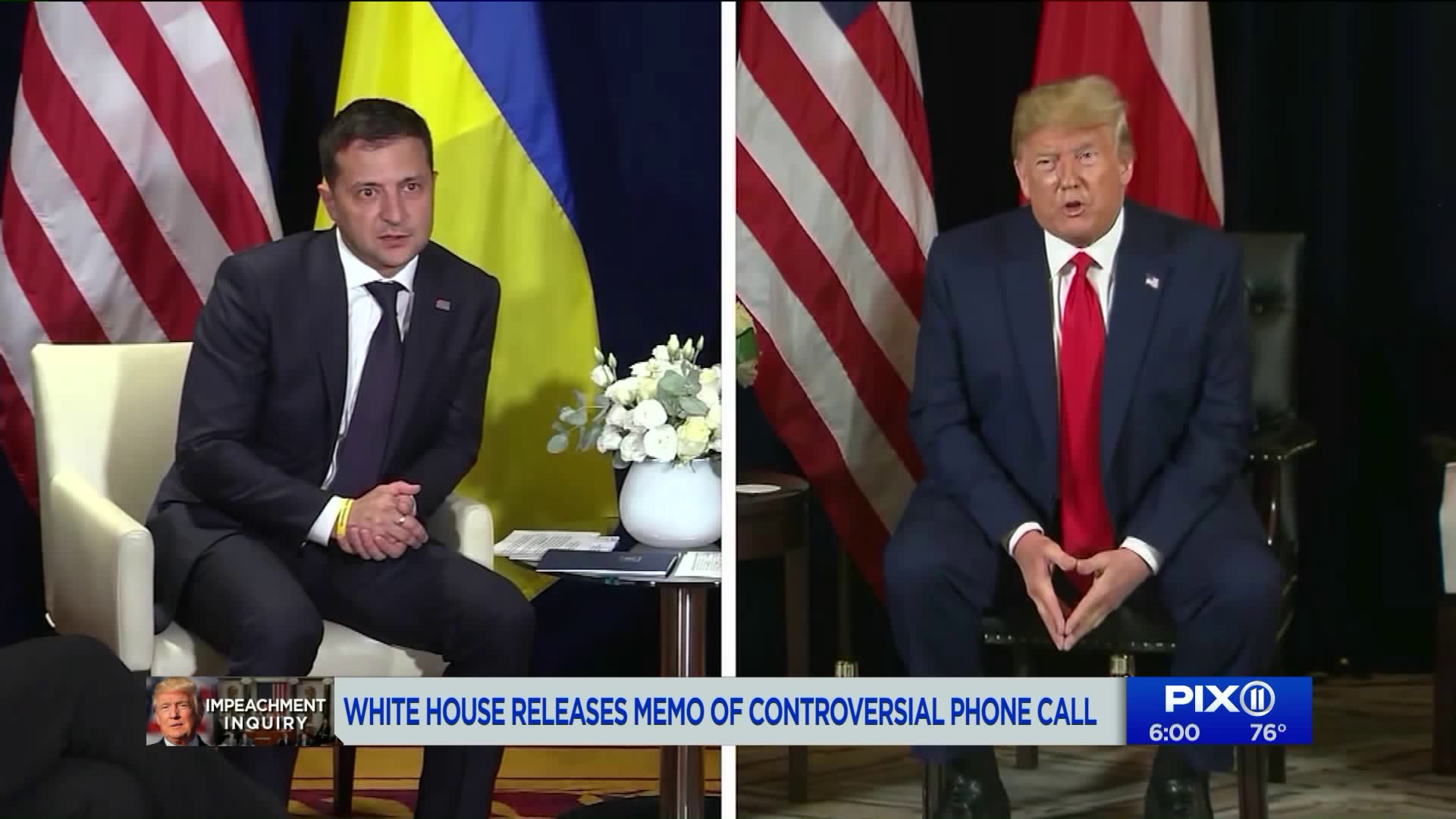 President Donald Trump says the diplomacy he conducted this week is being overshadowed by a conversation in which he urged Ukraine`s president to investigate Democratic political rival Joe Biden. 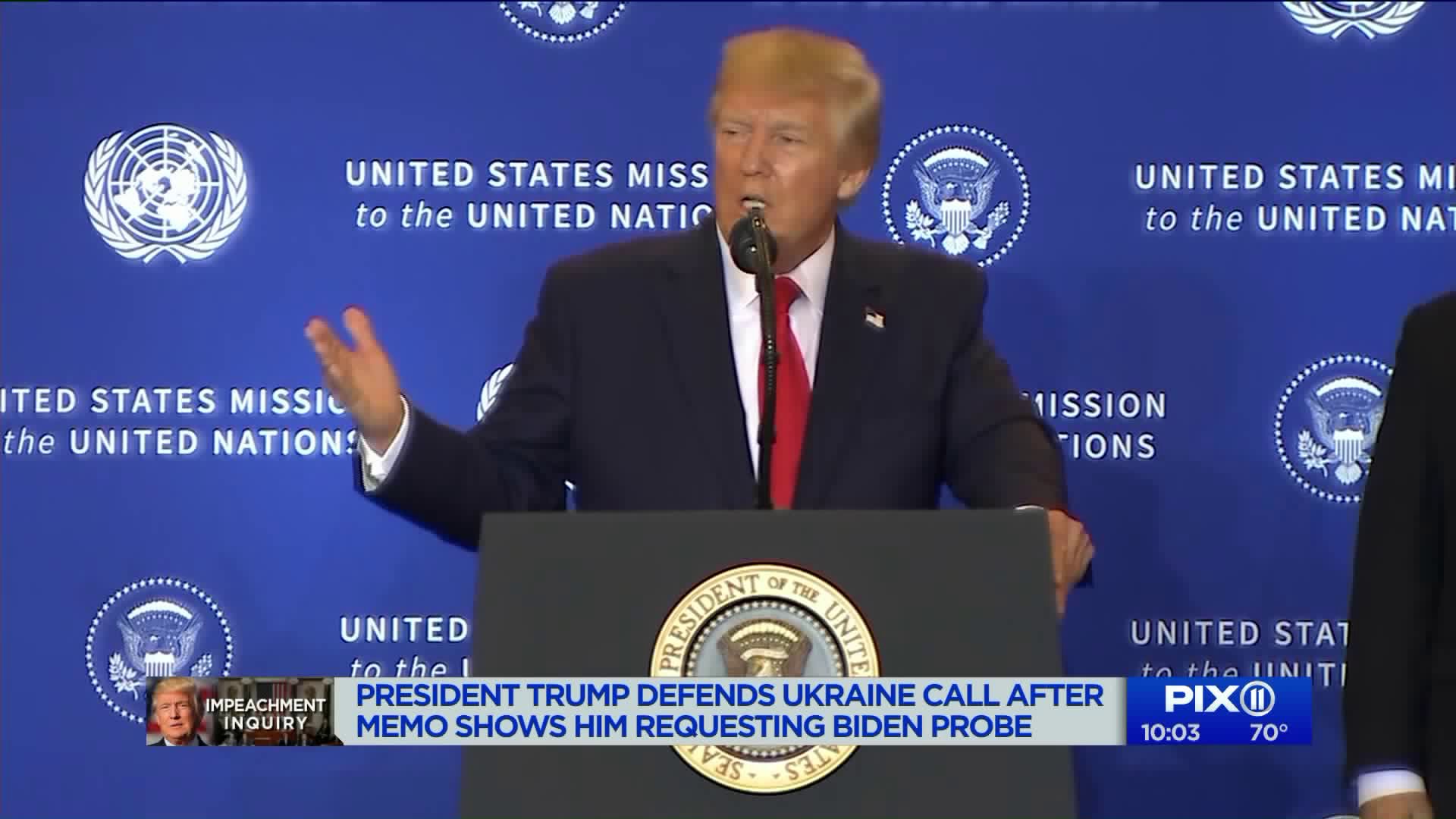 President Donald Trump says the diplomacy he conducted this week is being overshadowed by a conversation in which he urged Ukraine's president to investigate Democratic political rival Joe Biden.

Trump is telling reporters at a news conference that he met with nearly 20 different world leaders during three days in New York, and signed a partial trade agreement with Japan.

But he says that, instead of covering those topics, journalists choose to waste their time covering "nonsense."

Trump is referring to reports that he pressured Ukraine's leader to investigate Biden.

The White House has released a rough transcript of the July conversation in which Trump repeatedly asked Volodymyr Zelenskiy to open an investigation.

Zelinskiy says no one "pushed" him.

Trump says there was "no push, no pressure, no nothing."

This after it was revealed President Trump pressed Ukraine's leader to "look into" Democratic rival Joe Biden as well as his grievances from the 2016 election, according to a rough transcript of a summer phone call that is now at the center of Democrats' impeachment probe into Trump.

Trump repeatedly Ukrainian President Volodymyr Zelenskiy to work with Attorney General William Barr and Rudy Giuliani, Trump's personal lawyer. At one point in the conversation, Trump said, "I would like for you to do us a favor."

The president's words set the parameters for the debate to come — just the fourth impeachment investigation of an American president in the nation's history. The initial response highlighted the deep divide between the two parties: Democrats said the call amounted to a "shakedown" of a foreign leader, while Trump — backed by the vast majority of Republicans — dismissed it as a "nothing call."

The call is one part of a whistleblower complaint on the president's activities. After being stymied by the administration, lawmakers on the House and Senate intelligence committees will get their first look at the complaint on Wednesday. Congress is also seeking an in-person interview with the whistleblower, who remains anonymous.

Trump spent the day meeting with world leaders at the United Nations, a remarkable split screen even for the turbulence of the Trump era. On his schedule: a meeting with Zelenskiy.

In light-hearted appearance before reporters, Zelenskiy said he didn't want to get involved in American elections, but added, "Nobody pushed me." Trump chimed in, "In other words, no pressure."

The next steps in the impeachment inquiry were still developing a day after House Speaker Nancy Pelosi launched the probe. Moderate Democrats, including some from districts where Trump remains popular, urged the speaker to keep the inquiry to Ukraine and not expand into other issues Congress had already been investigating.

"We need to be disciplined about how we communicate," said Rep. Elissa Slotkin of Michigan. "The minute we're talking about the intricacies of process is the minute that we are losing people."

Pelosi announced the impeachment probe on Tuesday after months of resistance to a process she has warned would be divisive for the country and risky for her party. But after viewing the transcript on Wednesday, Pelosi declared: Congress must act."

Trump, who thrives on combat, has all but dared Democrats to move toward impeachment, confident that the specter of an investigation led by the opposition party will bolster rather than diminish his political support.

"It's a joke. Impeachment, for that?" Trump said during a news conference in New York. He revived the same language he has used for months to deride the now-finished special counsel investigation into election interference, declaring impeachment "a hoax" and the "single greatest witch hunt in American history."

Republicans largely stood by the president and dismissed the notion that the rough transcript revealed any wrongdoing by Trump.

"I think it was a perfectly appropriate phone call, it was a congratulatory phone call," said Rep. Liz Cheney, the No. 3 House Republican. "The Democrats continually make these huge claims and allegations about President Trump, and then you find out there's no there there."

The memo released by the White House was not a verbatim transcript, but was instead based on the records of officials who listened to the call. The conversation took place on July 25, one day after special counsel Robert Mueller testified on Capitol Hill about his investigation into Russia's 2016 election interference.

In the 30-minute phone call with Zelenskiy, Trump encourages the Ukrainian leader to talk with Giuliani and Barr about Biden and his son Hunter, who served on the board of a Ukrainian gas company. Immediately after saying they would be in touch, Trump references Ukraine's economy, saying: "Your economy is going to get better and better I predict. You have a lot of assets. It's a great country."

At another point in the conversation, Trump asked Zelenskiy for a favor: his help looking into a cybersecurity firm that investigated the 2016 hack of the Democratic National Committee and determined it was carried out by Russia. Trump has falsely suggested Crowdstrike was owned by a Ukrainian.

In the days before the call, Trump ordered advisers to freeze $400 million in military aid for Ukraine — prompting speculation that he was holding out the money as leverage for information on the Bidens. Trump has denied that charge and the aid package does not come up in the conversation with Zelenskiy.

Trump has sought to implicate Biden and his son in the kind of corruption that has long plagued Ukraine. Hunter Biden served on the board of a Ukrainian gas company at the same time his father was leading the Obama administration's diplomatic dealings with Kyiv. Though the timing raised concerns among anti-corruption advocates, there has been no evidence of wrongdoing by either the former vice president or his son.

Biden said it was "tragedy" that Trump was willing to "put personal politics above his sacred oath." He singled out Trump's attempts to pull Barr and the Justice Department into efforts to investigate Biden, calling it "a direct attack on the core independence of that department, an independence essential to the rule of law."

While the possibility of impeachment has hung over Trump for many months, the likelihood of a probe had faded after special counsel Robert Mueller's Trump-Russia investigation ended without a clear directive for lawmakers.

Since then, the House committees have revisited aspects of the Mueller probe while also launching new inquiries into Trump's businesses and various administration scandals that all seemed likely to drag on for months.

But details of Trump's dealings with Ukraine prompted Democrats to quickly shift course. By the time Pelosi announced the probe, about two-thirds of House Democrats had announced moving toward impeachment probes.

The burden will probably now shift to Democrats to make the case to a scandal-weary public. In a highly polarized Congress, an impeachment inquiry could simply showcase how clearly two sides can disagree when shown the same evidence rather than approach consensus.