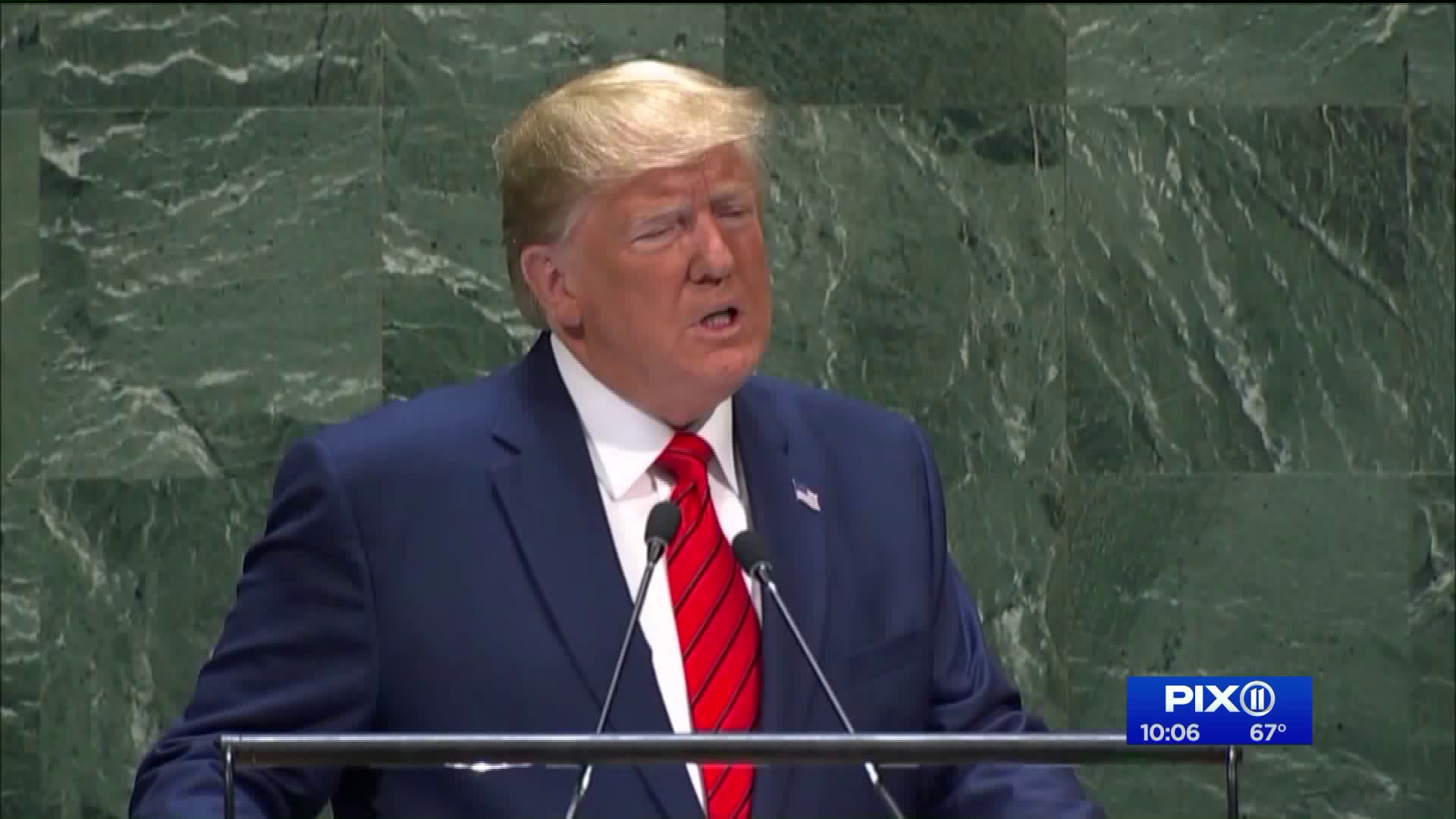 House Speaker Nancy Pelosi on Tuesday announced a formal impeachment inquiry into President Donald Trump, a dramatic move that signals a change in Pelosi`s political calculation and comes as the President faces outrage overreports that he pressured a foreign leaderin an effort to target a political rival. We ask local supporters and those against the President for their take. 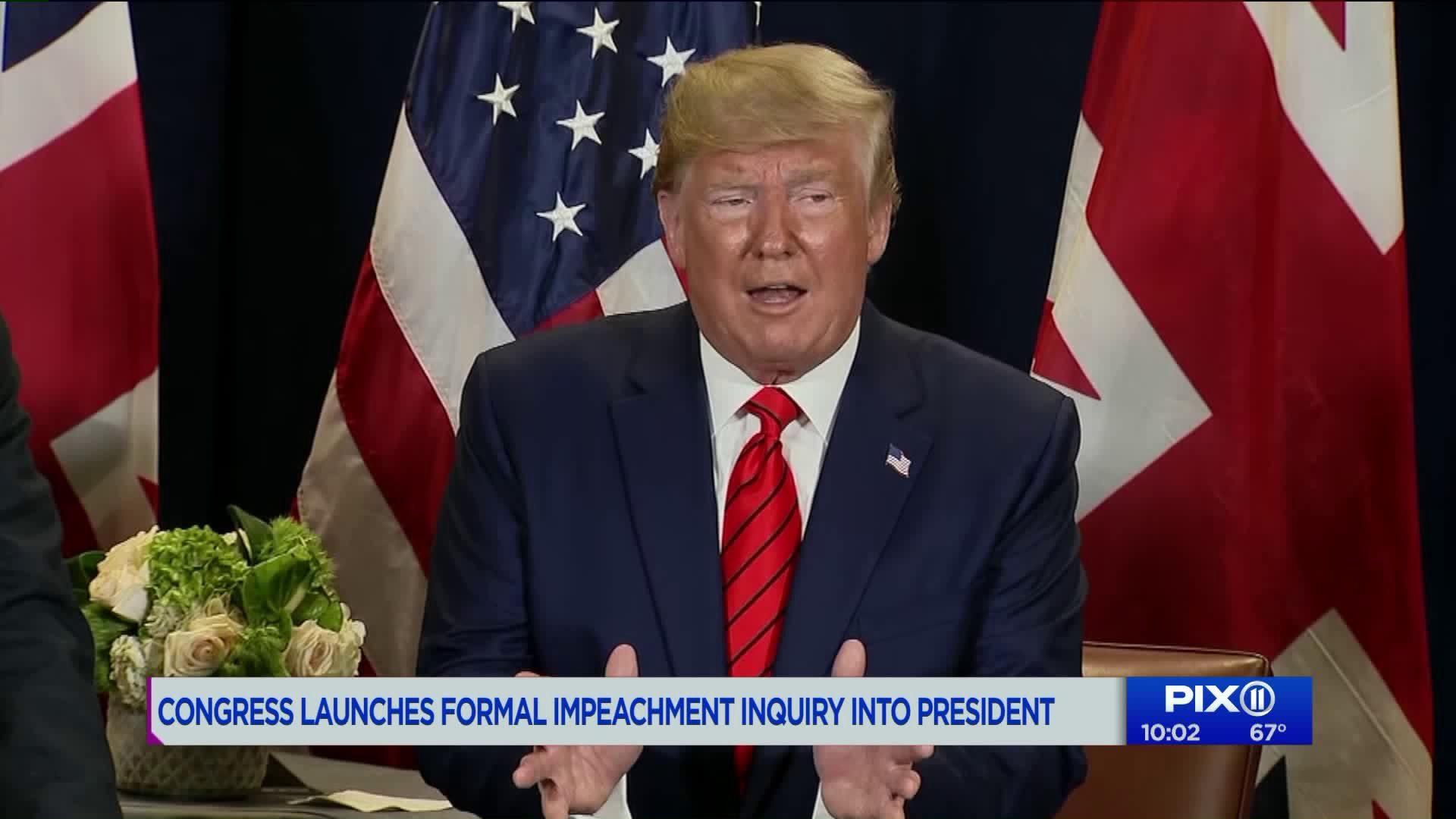 House Speaker Nancy Pelosi on Tuesday announced a formal impeachment inquiry into President Donald Trump, a dramatic move that signals a change in Pelosi's political calculation and comes as the President faces outrage over reports that he pressured a foreign leader in an effort to target a political rival.

The announcement marks the most direct step taken by the House Democratic leader to embrace impeachment proceedings and is a significant escalation in the fight between House Democrats and the President.

"The actions of the Trump presidency revealed the dishonorable fact of the President's betrayal of his oath of office, betrayal of our national security and betrayal of the integrity of our elections," Pelosi said in a news conference. "Therefore, today, I am announcing the House of Representatives moving forward with an official impeachment inquiry."

"Such an important day at the United Nations, so much work and so much success, and the Democrats purposely had to ruin and demean it with more breaking news Witch Hunt garbage. So bad for our Country!"

Such an important day at the United Nations, so much work and so much success, and the Democrats purposely had to ruin and demean it with more breaking news Witch Hunt garbage. So bad for our Country!

The House speaker, who has long pushed to keep her caucus away from the politically divisive issue, is signaling that she's responding to the seismic shift among Democratic members, following Trump's admission of discussing Vice President Joe Biden and his son in his phone call with the Ukrainian President. Dozens of House Democrats -- many from moderate or Trump-won districts -- have announced their support for an impeachment inquiry over the past 48 hours.

In advance of that statement, Pelosi and Majority Leader Steny Hoyer also announced plans to vote on a resolution of disapproval on Wednesday for allegations "that the President of the United States sought to enlist a foreign government to interfere in our democratic process by investigating one of his political rivals -- and may have used the withholding of Congressionally-appropriated foreign assistance days earlier as intimidation." Their statement did not mention impeachment.

Pelosi consulted Tuesday afternoon with the six House Democratic leaders to discuss their presentation to the caucus later in the day, Democratic sources familiar with the issue say. In that closed-door meeting before her public announcement, Pelosi said the six chairmen will continue to investigate under a powerful new umbrella of an impeachment inquiry.

A separate source in the room said the speaker added, "Here we are. A moment of truth. Truth is what this has been about all along." She said, "The DNI has chosen to break the law. The law is clear" adding, "This is a betrayal of our national security. A betrayal of our election."

At an Atlantic Ideas Festival event in Washington on Tuesday, Pelosi declined to weigh in on specifics when asked about impeachment.

Behind the scenes, Pelosi is encouraging members of her caucus to state their impeachment position now in order to show there is a groundswell in the caucus. She is also conveying that message to freshmen.

Civil rights icon Rep. John Lewis on Tuesday announced his support for impeachment proceedings, arguing that "now is the time to act" and any delay "would betray the foundation of our democracy."

"We will never find the truth unless we use the power given to the House of Representatives and the House alone to begin an official investigation as dictated by the Constitution," the Georgia Democrat said in a speech on the House floor. "The future of our democracy is at stake."

Some of Pelosi's closest allies, including House Reps. Rosa DeLauro of Connecticut and Debbie Dingell of Michigan, have signaled their support for impeachment proceedings — a significant indicator that the speaker could be moving closer to backing the divisive political procedure.

Another crucial development has been multiple high profile freshmen Democrats in districts Trump won in 2016 either coming out publicly to fully endorse the House Judiciary Committee's impeachment inquiry or at least opening the door to proceedings, citing Trump's actions as forcing them to act.

One of those freshman Democrats, Rep. Mikie Sherrill of New Jersey, stressed on CNN "New Day" Tuesday that "none of us ran on impeaching the President." But she argued that the allegation that Trump might have tried leveraging foreign military aid to advance his reelection efforts was "just a line that I think was too much for all of us."

Pelosi has cited the House members in GOP-leaning districts as part of her hesitance to embrace impeachment, and the groundswell of statements over the past 48 hours could signal a tipping point in the political calculus.

"If investigations confirm recent reports, these actions represent impeachable offences that threaten to undermine the integrity of our elections and jeopardize the balance of power within the federal government," Rep. Haley Stevens of Michigan said in a statement Tuesday. Stevens had told CNN last month that she had "mixed reviews from the people of my district" on the issue of whether to move forward with impeachment proceedings.

So far, as many as 161 House Democrats have publicly stated their support for an impeachment inquiry into Trump, according to a CNN count, and that doesn't include the House Democrats who've said in recent days that the President's behavior is a turning point in Democrats' oversight into the administration.

Pelosi has, for months, resisted pursuing impeachment because she has sought to protect vulnerable Democrats in GOP-leaning districts who could face voter backlash.

Rep. Jamie Raskin of Maryland, a member of House Judiciary, told CNN on Tuesday morning that he believes articles of impeachment are "inevitable" and said there's a "growing clamor throughout the Democratic caucus" to deal with Trump's "reckless and lawless" behavior.

But some vulnerable Democrats in 2020 are still treading cautiously on the issue.

"Before making any judgments, I want to know the facts of what occurred between the President and Ukraine," McAdams said. "I share Sen. (Mitt) Romney's view that If the President used his position to pressure a foreign power to dig up dirt on a rival for his own personal gain, it would be deeply troubling. I believe it would be a betrayal of the loyalty owed to our country and the Constitution."

Rep. Max Rose, another endangered House Democrat, told CNN that he has not moved off his opposition to impeachment, but argued that "we have to get to the facts" of the allegations.

"It is impossible to not take these allegations seriously. It is a national security matter," the New York Democrat said Tuesday on Capitol Hill, adding, "It's incredibly serious ... what I'm not going to do is jump to make another declaration."

Asked if that meant he is opposed to moving ahead on impeachment, Rose said, "My current position right now is clear, but that is not a justification to not take these points as seriously as possible."

There has been no evidence of wrongdoing by either Joe or Hunter Biden.

That call was also part of a whistleblower complaint submitted to the Intelligence Community Inspector General, which hasn't been shared with lawmakers despite calls from Democrats.

Trump acknowledged on Sunday that he discussed the former Vice President Joe Biden in a phone call over the summer with Ukraine's president, but denied doing anything improper.

CNN confirmed that Trump asked his acting chief of staff Mick Mulvaney to put a hold on millions in military aid to Ukraine roughly one week before a call with Zelensky, two senior administration officials said on Monday. The Washington Post first reported this.