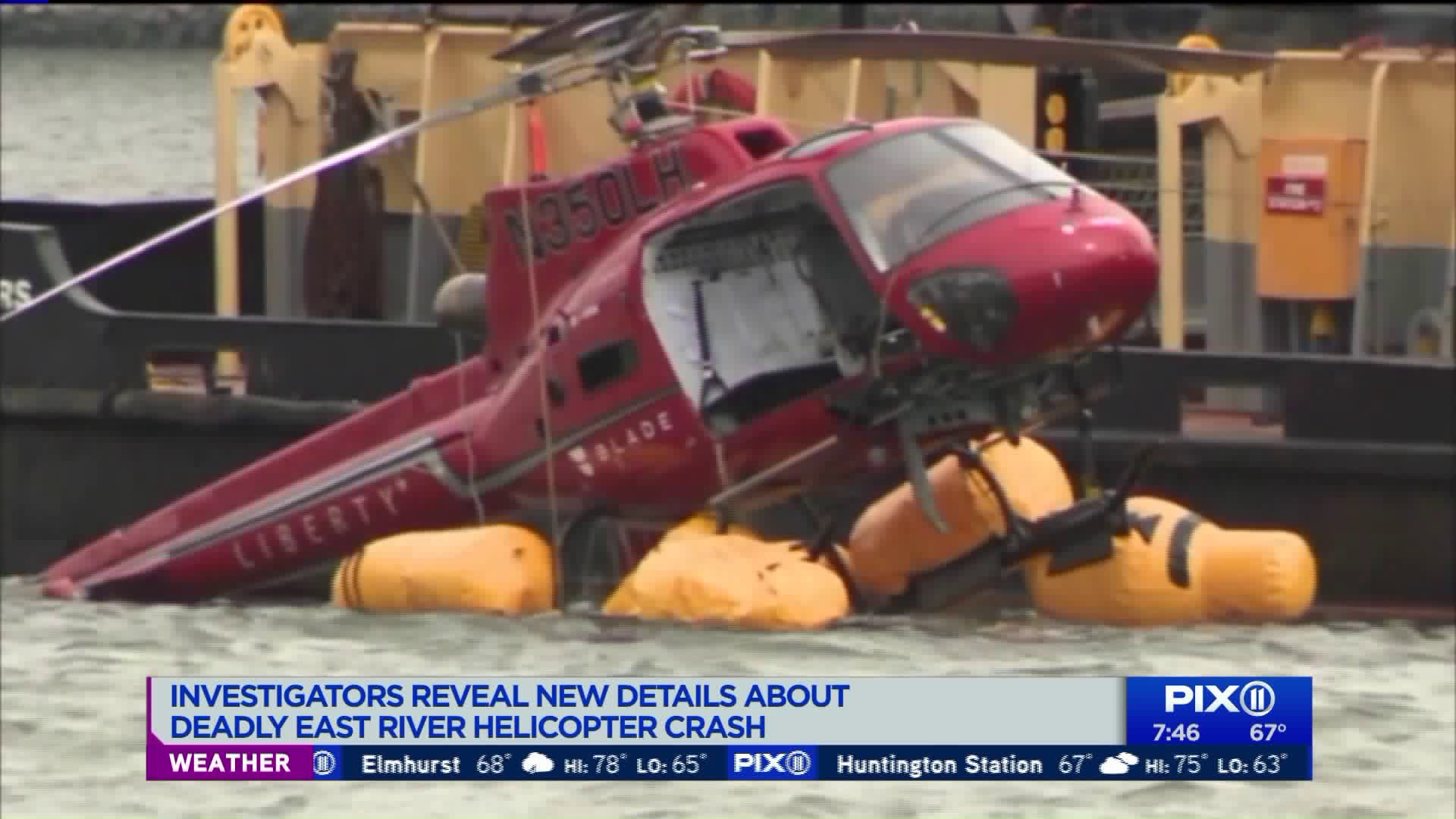 Video from inside a doors-off sightseeing helicopter that crashed in a New York City river last year shows doomed passengers struggling to free themselves from harnesses as the aircraft fills with water, federal investigators said Monday. The National Transportation Safety Board made a transcript of the video public on Monday, but the footage itself was not provided.

MANHATTAN  — Video from inside a doors-off sightseeing helicopter that crashed in a New York City river last year shows doomed passengers struggling to free themselves from harnesses as the aircraft fills with water, federal investigators said Monday.

"How do I cut this?" one passenger asks, just 13 seconds before the helicopter becomes completely submerged.

The National Transportation Safety Board made a transcript of the video public on Monday, but the footage itself was not provided. It was taken from a GoPro camera mounted on the cabin ceiling. Investigators had been looking at whether the harnesses hindered passengers' escape from the helicopter, which flipped over and quickly sank.

The transcript painted a picture of tragedy that unfolded in mere seconds, with one passenger reaching for a spot on his chest where a hook knife had been seen earlier, another pulling in vain at the shoulder straps of his harness and a third heard panting.

The agency also released dozens of other documents from its investigation into the deadly March 2018 crash in the East River and set a Dec. 10 hearing in Washington to determine a probable cause.

All five passengers drowned. Police and fire department divers said they found their bodies strapped in harnesses and used knives to cut them loose. Visibility underwater was maybe a foot, divers told investigators.

Pilot Richard Vance was wearing just a seatbelt and was able to free himself, officials said. Asked by investigators if he considered going back to rescue the passengers, Vance said he wanted to, but he thought his clothing would weigh him down.

The helicopter crashed after a tether meant to keep passengers safe got caught on a fuel shutoff switch a few minutes into the scheduled 30-minute flight, stopping the engine, Vance told investigators.

Vance said once the engine stopped, he took action to glide the helicopter away from crowded areas — like tall buildings and Central Park — but hadn't noticed the fuel shutoff switch was the culprit until he looked down at it just before impact.

The "tether loop was underneath the handle," Vance said, according to a transcript of his interview with investigators.

In a submission to investigators, the company that organized the flight pointed to the shutoff as a "long standing design issue" with the floor mounted fuel controls of the helicopter, a Eurocopter AS350.

The company, FlyNYON, also pointed to problems with the helicopter's emergency flotation system, which failed to keep the aircraft from flipping over and sinking.

"These issues continue to pose a threat to passengers and crew on AS350B2 helicopters and any helicopter employing the same Dart emergency flotation system," FlyNYON said in a statement. "We shared our concerns with the NTSB and urge them to alert the FAA at the highest levels to ensure they are aware of these very serious safety issues."

The Federal Aviation Administration grounded doors-off flights after the East River crash, but they've since resumed. FlyNYON's website promotes "sneaker selfies," complete with video and a photo of a passenger's feet dangling over lower Manhattan.

The company also recently caught flak for running a promotion encouraging passengers to bring their dogs along for the ride.

Sen. Charles Schumer, D-N.Y. and Sen. Bob Menendez, D-N.J. have called on the FAA to close a loop hole that allows doors-off flights for aerial photography, saying it's meant for professional and commercial purposes, not tourists.

"FlyNYON and their perilous doors-off flights remain an egregious danger in the sky to this day," Schumer said in a statement.

He said last year's crash, the dog promotion and other factors, paint "a clear picture for federal regulators that argues for an end to the tragic doors-off flights this company so brazenly continues to offer."

The passengers who died were Dallas fire Officer Brian McDaniel, 26; his friend Trevor Cadigan, 26, a journalist from Dallas who had recently moved to New York; Carla Vallejos Blanco, 29, a tourist from Corrientes, Argentina; Tristan Hill, 29, who for a time was a basketball operations assistant with the Westchester Knicks, a Development League affiliate of the New York Knicks; and Daniel Thompson, 34.