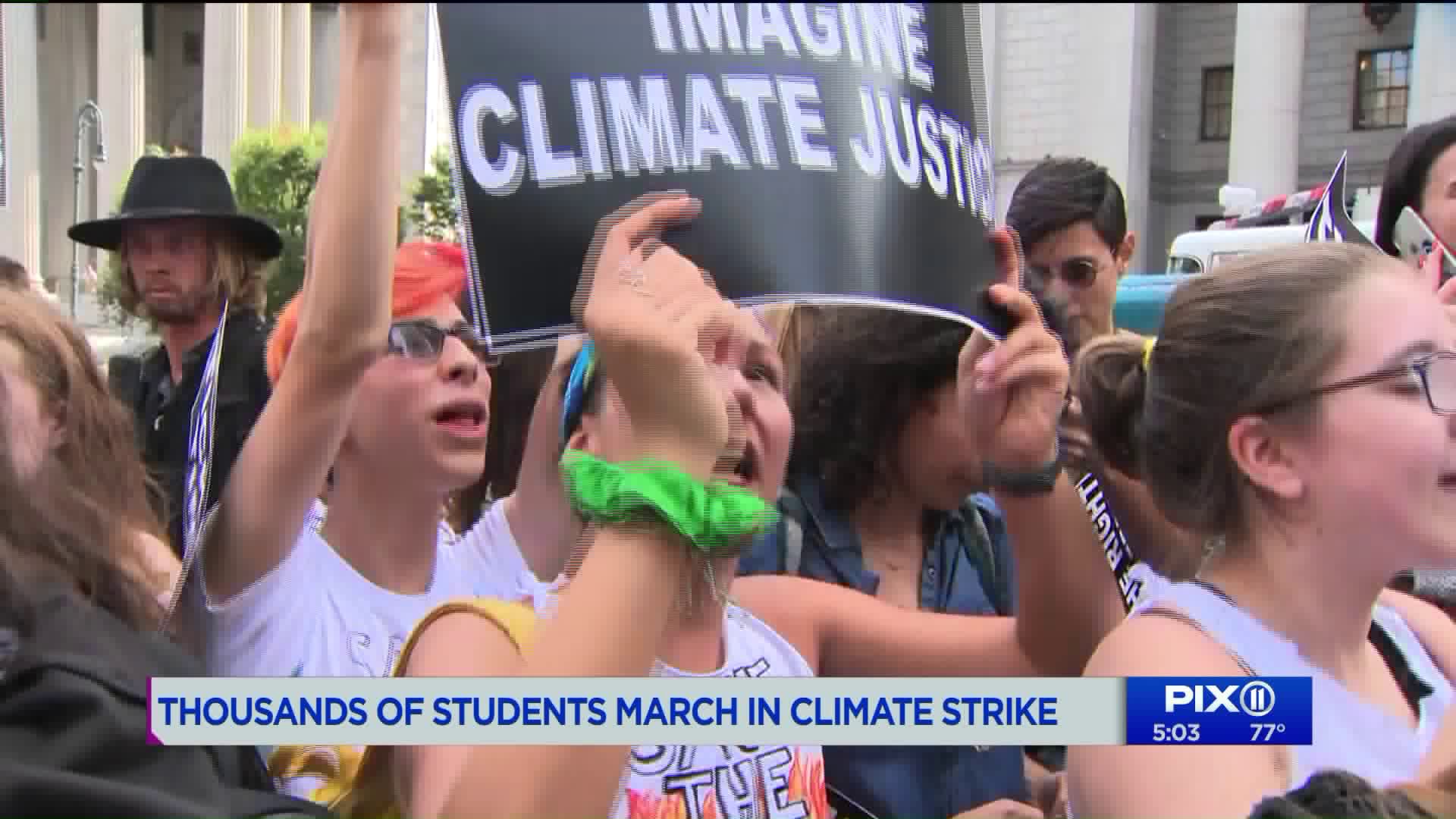 The Global Climate Strike is the third in a worldwide series of climate rallies organized by school students, and led by 16-year-old Greta Thunberg. Protestors hope to put pressure on politicians and policy makers to act on climate issues. 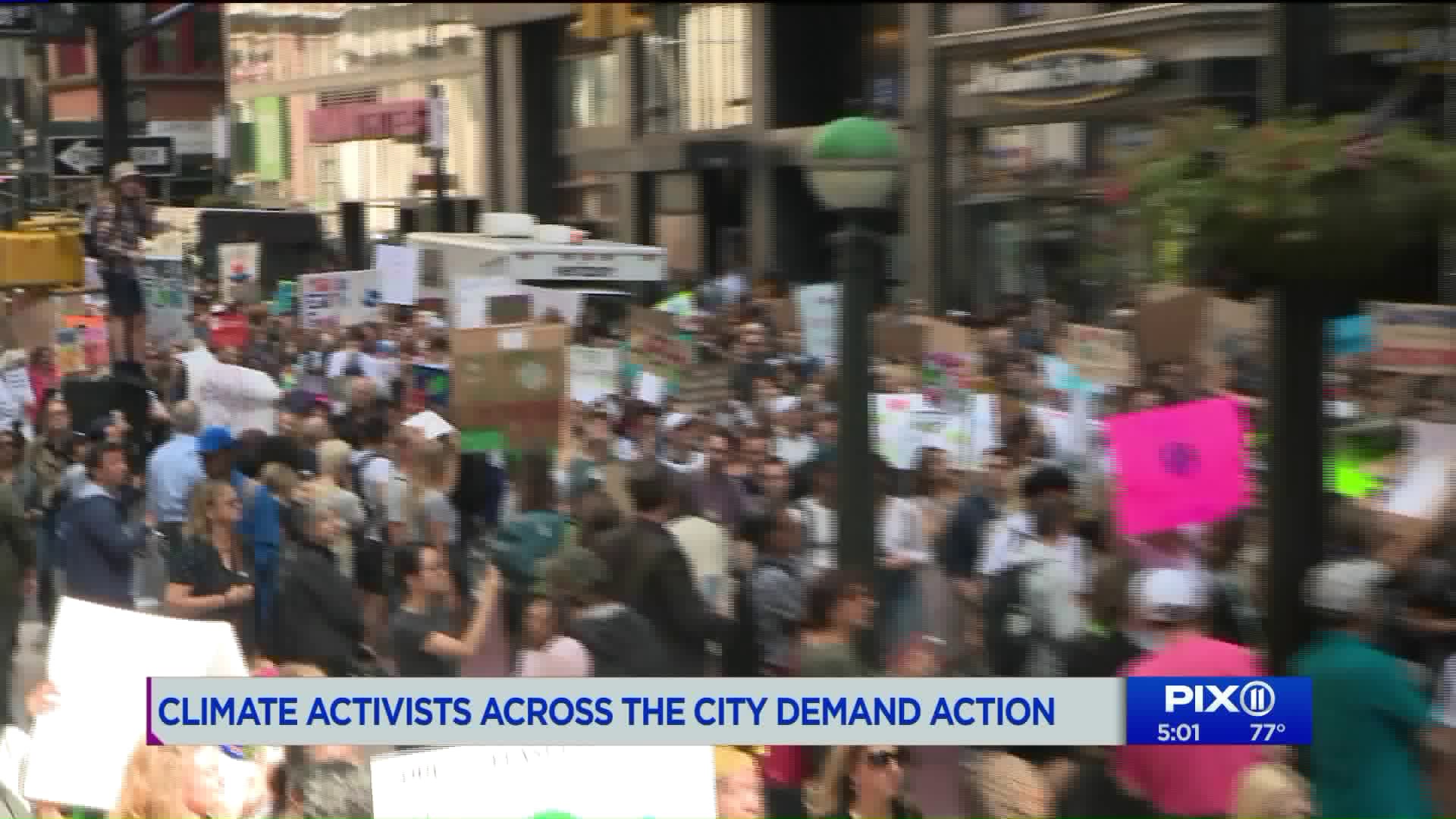 From London to New York City and from Perth to Paris, climate activists are taking part in a global general strike on Friday in what is expected to be the biggest day of climate demonstrations in the planet's history.

Thousands of students attended the Climate Strike in New York City, instead of going to school.

Clio Turner told PIX11, "I am here because climate change is real."

There was a mixture of fear and optimism in the crowd. Fear that people won't act fast enough but optimism that so many young people turned out to the Foley Square rally and march to Battery Park.

Karissa Nieves, 14, from Staten Island said,"We are trying to make our voices heard."

These students, with their homemade signs, said they want action from U.S. and world leaders.

"Please listen to us. We have something to say," Staten Island high school student Peter Whalen said in Foley Square.

Some of the first protests were held in Australia and organizers have said "well over" 300,000 people gathered at more than 100 cities and towns across that country. Melbourne hosted the biggest march, according to organizers, with 100,000 people turning out, while 80,000 rallied in Sydney and 30,000 in Brisbane.

The Global Climate Strike is the third in a worldwide series of climate rallies organized by school students, and led by 16-year-old Greta Thunberg. Protestors hope to put pressure on politicians and policy makers to act on climate issues.

#ClimateStrike protest is so big in Lower Manhattan that the #NYPD had to shut down all of the streets in a section of Lower Manhattan, including the exit from the Brooklyn Bridge. @PIX11News @NYPDnews pic.twitter.com/SSMgxSEhsU

Thunberg tweeted: "Incredible pictures as Australia's gathering for the #climatestrike... Australia is setting the standard!"

According to Swedish schoolgirl Thunberg, who is in New York ahead of the United Nations Climate Action Summit on September 23, around 4,638 events have been organized in 139 countries.

Protests have been held on some of the Pacific Island nations most under threat from the climate crisis -- the nation of Kiribati may be the first country to disappear under the rising sea levels of climate change -- while people turned out to march in New Zealand, Thailand and India.

"Where is my right to breathe?" read one defiant sign held up by a protestor in New Delhi, India, in a picture posted by Greenpeace India on Twitter. Meanwhile, in Thailand young protestors pretended to collapse as they demanded transformative action on the climate crisis.

Thousands of young people are on a #climatestrike in Lower Manhattan. They are now marching from Foley Square to Battery Park. Their message: “There’s no planet B.” @PIX11News pic.twitter.com/55IcYtulp9

It is not just young people taking part this month. The global youth movement has asked for adults to join them this time and many have responded.

Jean-Baptiste Redde, a 62-year-old from Bourgogne, France, was striking in Paris. "I'm here today because leaders aren't taking the measures they should be taking," he told CNN. "We are all concerned. We are all part of the ecosystem, it's all linked."

Protests are sweeping across Africa and Europe. Around 400 events are expected to take place in Germany alone. Thousands have gathered in front of the Brandenburg Gate in Berlin, while Thunberg tweeted that early reports suggest over 50,000 have assembled in Hamburg.

In London, Jeremy Corbyn, leader of the UK opposition party Labour, addressed a rally in Westminster, while there were marches in a number of Britain's major cities.

Waqas Tufail, a criminology professor, was in Leeds, England. "Climate change is killing the planet, and I'm worried about the future of my children," he told CNN.

"We need to act now, especially governments and corporations who damage the environment the most. The atmosphere is unbelievable, it's full of young people who are demanding action," Tufail added.

Sadrach Nirere, coordinator for Fridays for Future, Uganda, told CNN that it was time for young people to "rise up" and "demand urgent action."

"Uganda is facing serious frequent droughts every year, our temperatures are rising yet we are an agro-based economy that grow crops like coffee, which can thrive in such conditions," Nirere said.

"There is uncontrolled deforestation happening, the plastic bag ban is not working, there is negative political response towards climate change issues. This must stop.

"As young people, it is our time to rise up and add our voices together in demand for urgent climate action. We are rising for our future."

Labor and humanitarian groups, environmental organizations and employees of some of the world's biggest brands are participating.

Nearly 1,000 Amazon employees have pledged to walk out and Microsoft workers have also said they will join the strikes.

Microsoft Workers 4 Good tweeted earlier this month: "Microsoft workers will be joining millions of people around the world by participating in the youth-led Global Climate strike on September 20th to demand an end to the age of fossil fuels."

Outdoor clothing brand Patagonia has said it plans to shut down its operations on Friday to allow employees to join the Global Climate Strike. (Stores in Italy and the Netherlands will close on September 27, and in Switzerland on September 28.)

Thunberg is to speak in NYC, which gave 1.1 million students permission to skip school
In New York City, thousands of people were marching early Friday afternoon in lower Manhattan to Battery Park, where a roster of young climate activists will speak, including Thunberg, who sailed to New York to attend the UN Climate Action Summit.

Thunberg was among the crowds marching to Battery Park ahead of the speeches.

The city had said its 1.1 million public school pupils could skip school for the strike on Friday without penalty, but made it clear that the students did need parental consent.

As for Thunberg, she took 15 days to sail across the Atlantic -- from Plymouth, UK, to New York City. She traveled on a zero-emission sailboat to reduce the environmental impact of her journey, according to a statement from her team.

The teenager, who last August began staging weekly solo protests outside the Swedish parliament every Friday, has become the figurehead of a burgeoning movement of youth climate activists.

This week she met former US President Barack Obama and told US politicians that they were not doing enough to combat climate change.

She has been invited to talk at the UN summit by UN Secretary-General Antonio Gutteres, who has called for heads of government to not bring speeches but plans on what he has called a climate emergency.

According to the Financial Times, leading economies such as Australia and Japan will not be invited to speak at the summit because of their continued support for coal is at odds with Gutteres' aims.

The Paris treaty, signed in 2015 by 195 nations, obliged governments to limit global temperature rises to "well below" 2 degrees Celsius and to strive for 1.5 degrees Celsius. The United States withdrew from the treaty in 2017.

In 2017, Obama lamented President Donald Trump's decision, saying in a statement that the deal was intended to "protect the world we leave to our children."

In Washington, D.C., students -- some as young as elementary school age -- gathered late Friday morning in John Marshall Park ahead of a march to the Capitol.

Many skipped school despite being told that their absences will be considered unexcused. While some will be excused with a note from their parents, others told CNN they are willing to accept whatever consequences they receive in order to participate.

Protesters chanted, "This is what democracy looks like," while holding signs with messages such as "There is no Planet B."

A couple of hours earlier, Catholic nuns joined a related rally in nearby Silver Spring, Maryland, before heading to the Washington event.

When students arrived at the Maryland gathering, adults cheered them on, video recorded by the Sisters of Mercy shows.

"Caring for Earth is one of our five critical concerns, and we have been inspired as youth around the world have been standing up to take action," a representative for the nuns said.