Climate Strike protest exceeds expectations of organizers, demonstrators and police; will it lead to action? 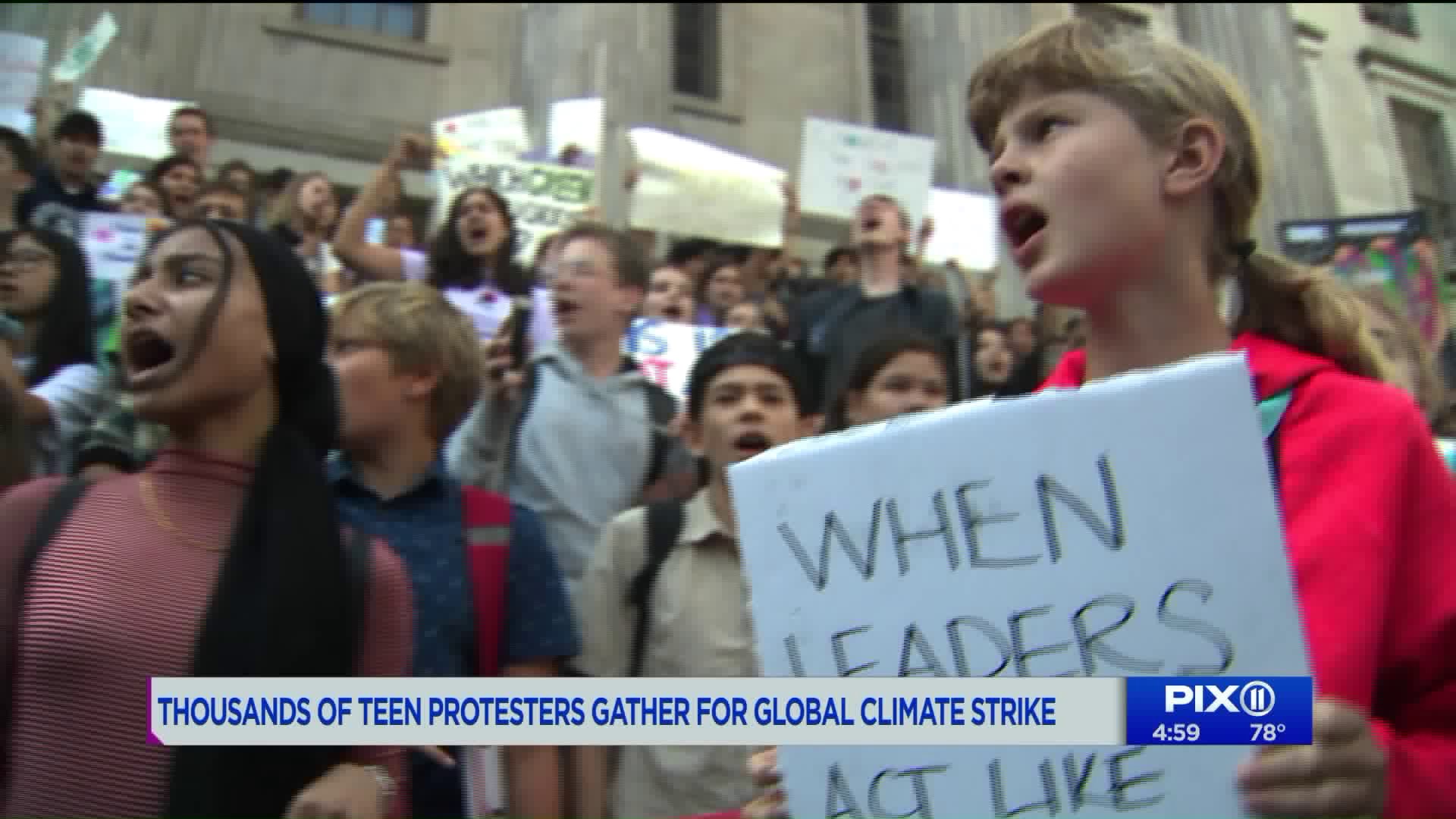 LOWER MANHATTAN — It was organized as a march and protest to draw attention to the need to fight climate change, but the event called Climate Strike ended up being far larger than anyone had anticipated — including organizers, participants, and even police.

The day began in Brooklyn, at Borough Hall, where a rally of a couple thousand people, mostly high school students, did not begin with noise, as so many demonstrations do. Instead, student leaders from a Brooklyn Friends School, inaugurated the event in a Quaker way — in silence.

"Joyous shock," is how organizer Otto Moran described the event. His co-organizer, Milly Berman, said that while they expected significant turnout, the crowds were clearly bigger than they'd planned.

"I had no idea," Berman told PIX11 News, "but it really shows how much our students and parents care about this issue."

She helped to lead the long stream of thousands across the Brooklyn Bridge. Among those in the crowd were students like Jamie Huang.

"This is really important for students," he said as he walked across the span, "so we can see what protest looks like in a democracy."

Public school students were granted the day off to participate in the protest, provided they'd gotten parents' or guardians' permission. However, also in the crowd were some public school teachers, even though, out of concern that they might show bias, the Department of Education had forbidden teachers from attending.

"We're here," one teacher told PIX11 News, although he declined to give his name. "This is the best lesson we could give," he said.

They were all headed to Foley Square, three blocks north of the bridge, on the Manhattan side, for a noontime rally. But when they arrived on that side of the bridge, the crowds were so big that police had to shut off the exit of the bridge, sending cars backward. It was clearly a much larger turnout than anticipated.

So many people had come out for the rally that the majority of them couldn’t even reach the Foley Square.

Instead, they went back to marching. They skipped Foley Square altogether, and headed to the second scheduled rally of the day, a mile away in Battery Park.

This time, though, the marchers were escorted in discrete groups, surrounded by NYPD officers.

The police department may not have anticipated the crowds to be as big as they were, but the NYPD has extensive experience with large demonstrations. The department mobilized quickly into mass rally mode.

Demonstrators who spoke with PIX11 News said that they were very pleased with the far-larger-than-expected turnout.

The numbers built all afternoon. For the mile from Foley Square to Battery Park, it was just a sea of people, as far as the eye could see.

The NYPD kept up. Officers kept people moving, without too much of a crush of people. They made it to the rally at Battery Park, but the density was so great, some people called it a day before arriving there.

For the thousands who jammed the park, they were treated with music and speeches, capped by a talk by the celebrity Swedish teen climate activist Greta Thunberg.

"Nowhere have I found anyone in power to tell it like it is, because no matter where you are, that burden they leave [is] to us teenagers, us children."

The teens and children in the crowd, by the many thousands, indicated that they're now looking to next week's United Nations General Assembly, where they're calling on world leaders to respond to the massive turnout at Friday's protest, and transform that into legislation and action.