Man accused of fatally stabbing LI teen in a massive brawl pleads not guilty, but gets held without bail 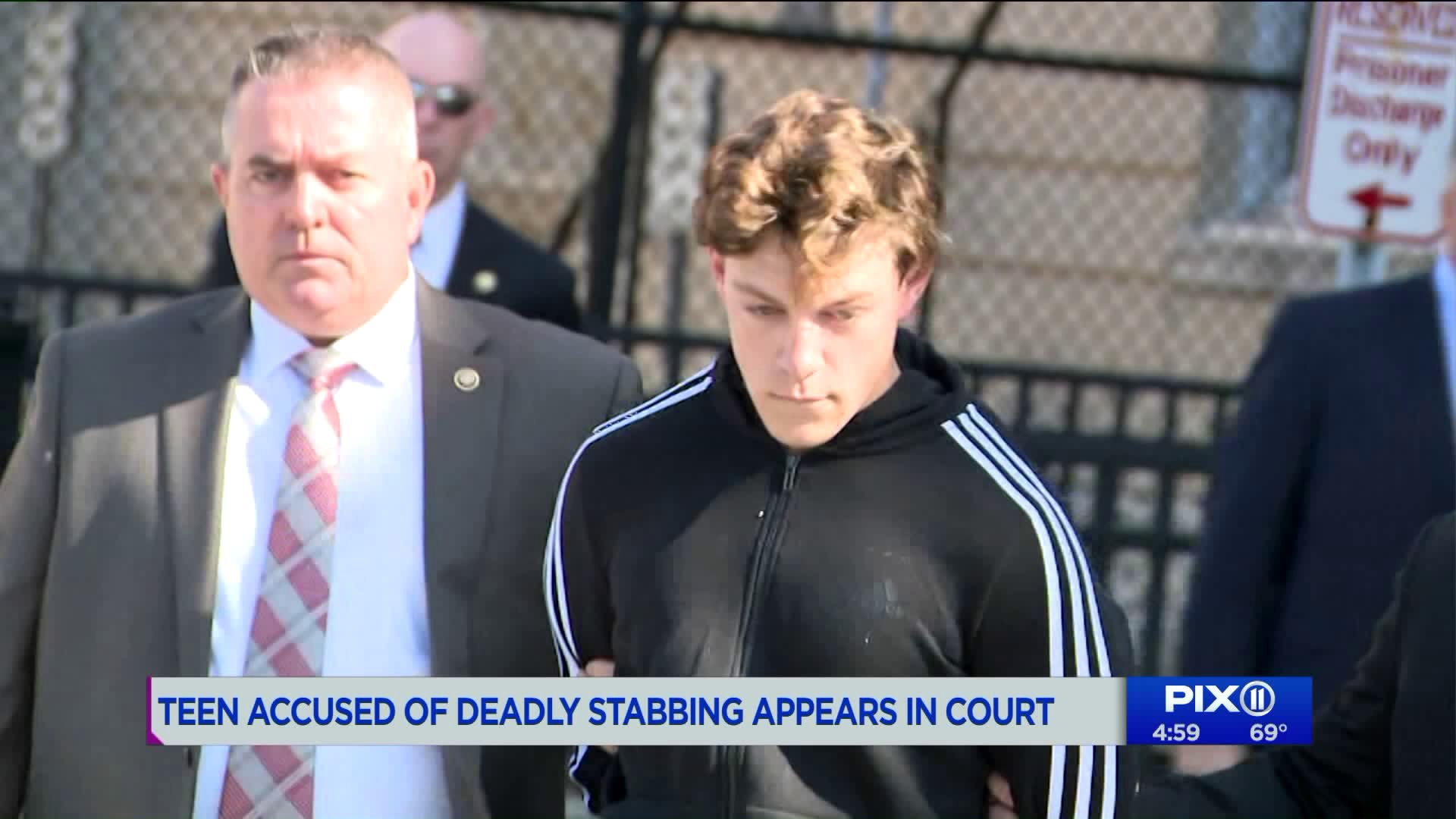 The man accused of stabbing a 16-year-old high school student to death during a brawl on Long Island this week faced a judge on Thursday for the crime. Tyler Flach was led in handcuffs from the detective squad to a car that took him to criminal court Thursday morning. He said nothing, while cameras rolled, and reporters shouted questions. 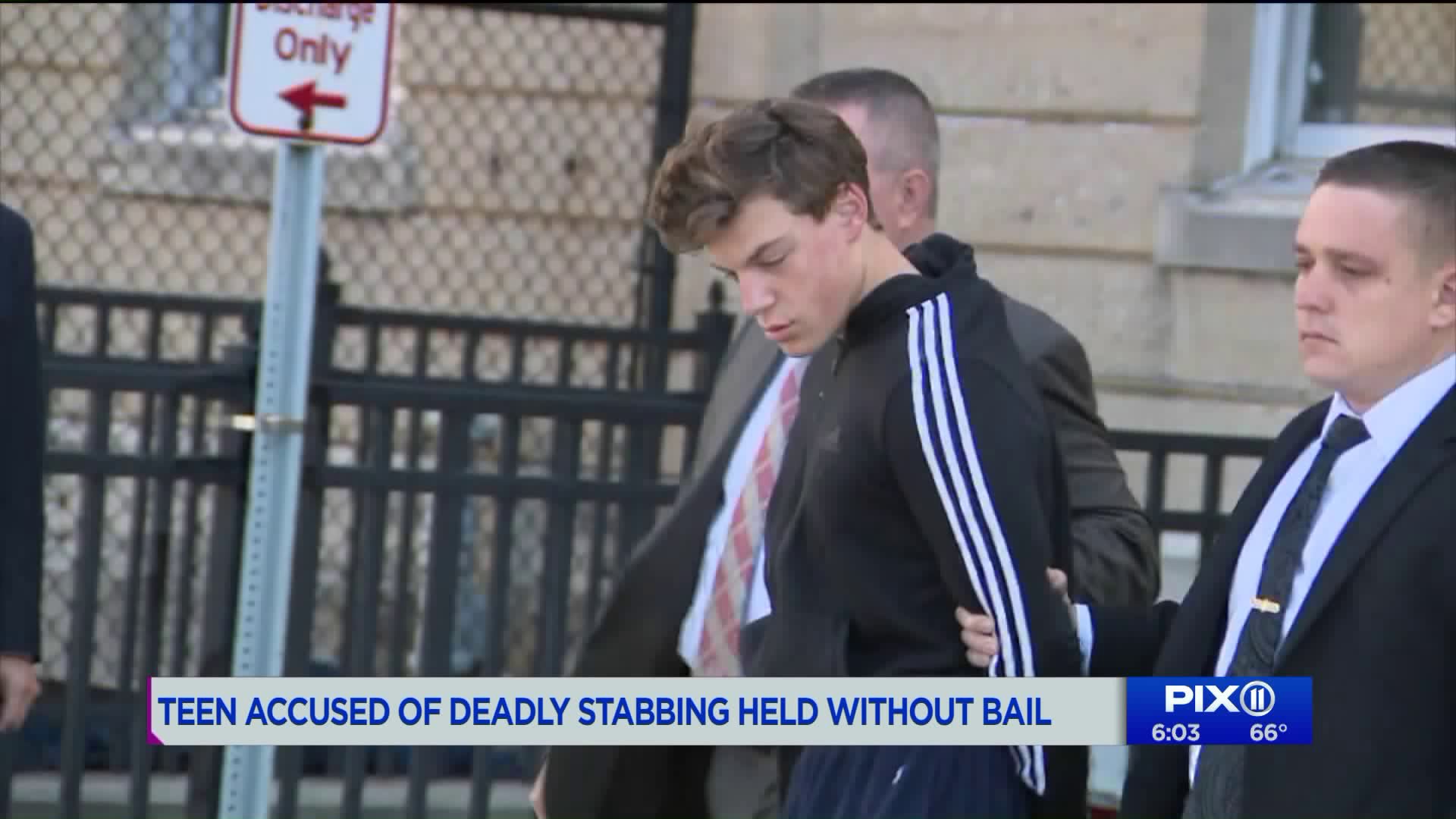 HEMPSTEAD, Long Island ---The man accused of stabbing a 16-year-old high school student to death during a brawl on Long Island this week faced a judge on Thursday for the crime.

Tyler Flach, 18, was taken into custody for allegedly killing a 16-year-old boy during a brawl in Oceanside, Long Island.

The arraignment featured an unsubstantiated claim, made by the lawyer for suspect Tyler Flach, of a gang connection. The statement left the family and supporters of victim Khaseen Morris in shock and in tears.

Flach, 18, never spoke in public on Thursday, even though he was widely seen.

He was led in handcuffs from the detective squad to a car that took him to criminal court Thursday morning. He said nothing, while cameras rolled, and reporters shouted questions.

He also did not speak in court early Thursday afternoon. Instead, his attorney, Edward Sapone, entered a not-guilty plea on his client's behalf. Then, Sapone made a statement about Khaseen Morris that resulted in Morris's two dozen or so supporters audibly gasping in the courtroom gallery.

"There is certainly evidence on social media that tends to suggest that that group is involved with street gang violence," Sapone elaborated after the court hearing.

He was referring to friends of Morris's friends who'd been at the scene of the fight on Monday after school.

Up to 70 teens were on site as the brawl broke out around 3:45 p.m. The melee was recorded on various witnesses' cellphones.

Police said that they're looking for more video evidence, and are likely to make more arrests in the case.

"We are still investigating the other persons that were with [Flach] there," Detective Lt. Stephen Fitzpatrick said at a news conference Thursday morning. "We've identified upward of seven," the homicide division chief said. "There may be even one more."

As for possible gang connections, there was no mention of it by investigators or prosecutors.

Morris's family left court in tears, and without comment.

However, later in the day, at the large and growing makeshift memorial where Morris was attacked, his sister spoke with PIX11 News exclusively.

"The lawyer can say whatever he wants," Keyanna Morris said.

She added that the steady stream of young, old, black, white, Latino and other supporters who keep showing up at the memorial to place mementos tells her brother's story.

"He was about love," his sister said. "Now the world knows his story."

Taylor Flach's next court appearance on Monday. In the interim, he's being held without bail, in protective custody.