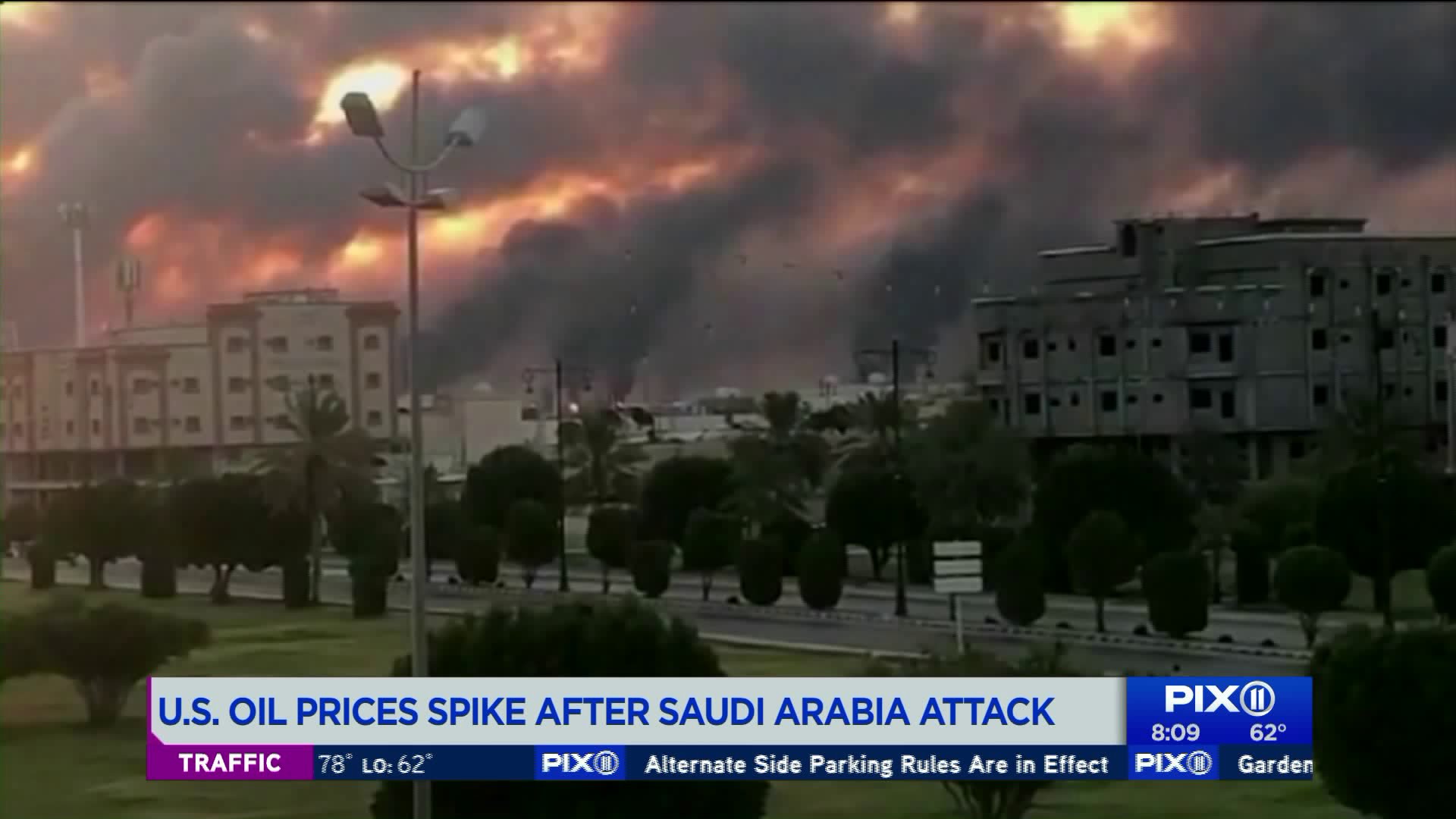 President Trump addressed the attack from the Oval Office.

Oil prices skyrocketed Monday. The price of US oil jumped nearly 15% to settle at $62.90 per barrel — its biggest daily percentage increase in more than a decade. Brent gained 14.6%, settling at $69.02 a barrel.

The global economy was already on shaky ground before coordinated strikes knocked out about half of the Saudi kingdom's oil capacity, or more than 5% of the global supply of crude. The resulting spike in oil prices could further dent global economic growth.

Other markets, meanwhile, were mostly lower.

Weighing on markets was a decision by the Chinese central bank to keep a key loan rate unchanged, contrary to market expectations. The market thought the People's Bank of China might cut the medium-term lending facility rate as a way to lower financing costs and support the economy. It stands at 3.3%.

The decision is "likely a touch more hawkish" than what the market anticipated, according to Stephen Innes, a market strategist for Asia Pacific at AxiTrader. "In the wake of the recent run of horrible data, markets were desperately hoping for a more accommodating PBOC."

On Monday, China reported that industrial production — an important indicator for China's economy — increased by just 4.4% in August compared to a year earlier. That was worse than the sector's performance in July, when it posted its weakest growth in 17 years.

That poor data fueled speculation that Chinese authorities would take more steps to stimulate the economy, including a potential loan rate cut Tuesday. That didn't happen, but Innes said that the People's Bank of China might want to wait for the Federal Reserve's policy decision later this week before making more plans for economic stimulus.

Investors are also awaiting that interest rate decision in the United States on Wednesday. Markets are pricing in a 66% probability that the Fed will cut rates by a quarter percentage point, according to CME's FedWatch tool.

The decision "will almost certainly" be a cut by that amount, said Jeffrey Halley, senior market analyst for Asia Pacific at Oanda. But he added in a research note that the "critical factor" will be whether another cut to more in the future. (The Fed also cut rates in July.)

The drop came a day after Moody's downgraded Hong Kong's credit outlook from stable to negative. The firm cited rising risks from ongoing protests in the city that could undermine its status as a global trading and financial hub.

"The change in outlook ... reflects the rising risk that the ongoing protests reveal an erosion in the strength of Hong Kong's institutions," Moody's said.

Government leaders in Hong Kong disputed the decision. Financial Secretary Paul Chan said in a statement Monday that he disagreed with Moody's rating, adding that Hong Kong has a "strong fiscal position and large foreign currency reserves which give the city ample buffers to navigate through the current challenges."

Deputy-level officials from the United States and China are meeting this week to prepare for talks among senior executives in the coming weeks.

China's Commerce Ministry said the country will send a negotiation team — which includes Liao Min, the vice minister of the Finance Ministry — to the United States on Wednesday.

The two economic superpowers said earlier this month that they have agreed to return to the negotiating table in Washington to discuss trade.

In the interim, the countries have been taking steps to de-escalate tensions between them. China last Friday said it would exempt American soybeans and pork from its latest round of tariffs, and on Monday, the US Department of Agriculture said that US companies have begun to export soybeans to China.

Earlier last week, China said it would waive other tariffs on US goods, and US President Donald Trump followed with plans of his own to push back new tariffs on Chinese goods by two weeks.