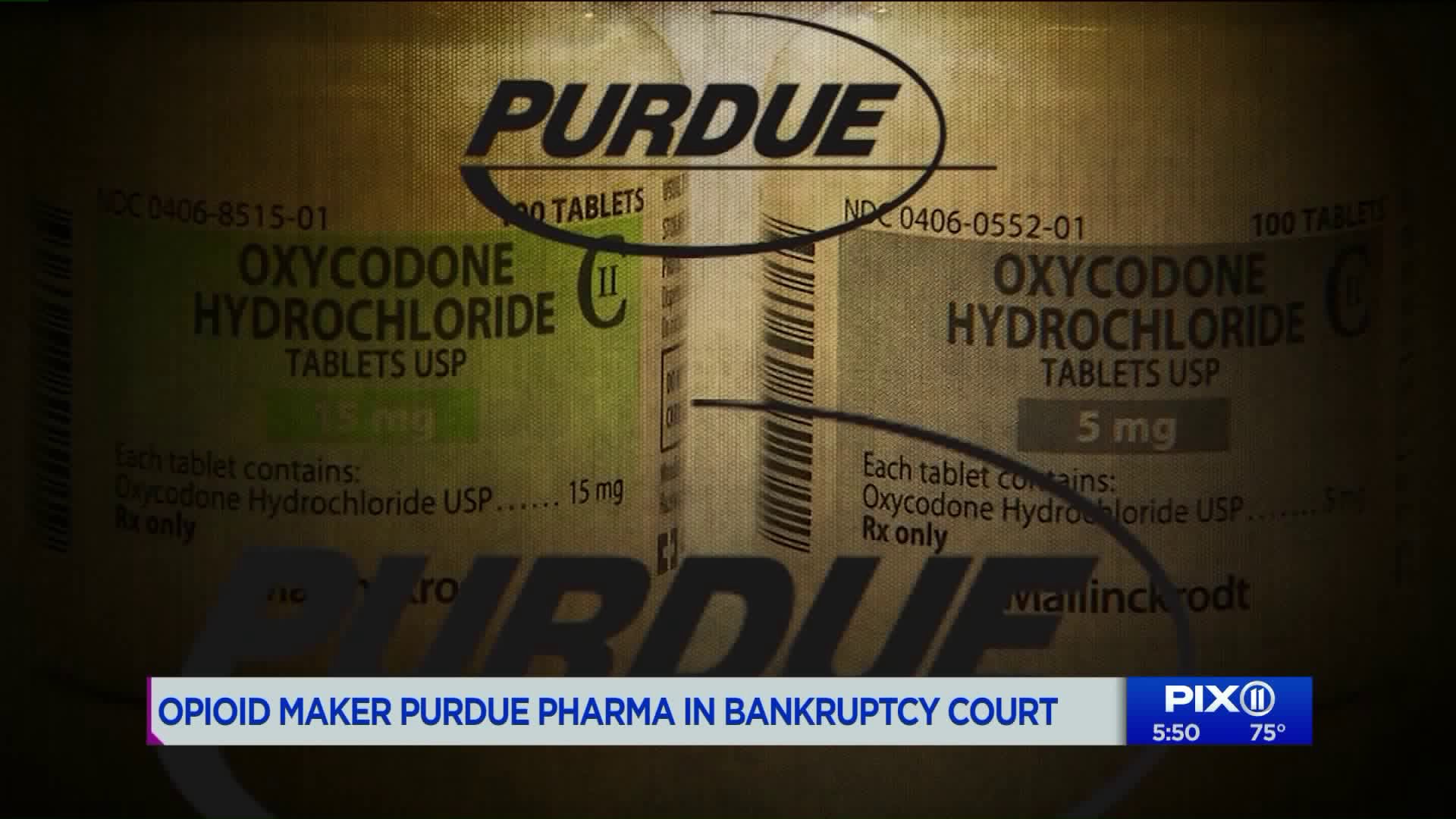 The tentative multibillion-dollar settlement with OxyContin maker Purdue Pharma would raise money to help clean up the opioid mess by ... selling more OxyContin. Stamford, Connecticut-based Purdue, cast as a major villain in the opioid crisis in some 2,600 lawsuits brought by state, local and tribal governments, hospitals, unions and others, filed for bankruptcy Sunday in the first step toward putting the settlement into effect.

The tentative multibillion-dollar settlement with OxyContin maker Purdue Pharma would raise money to help clean up the opioid mess by ... selling more OxyContin.

Purdue Pharma, the maker of the painkiller OxyContin, said it has filed for bankruptcy as part of a plan to settle lawsuits accusing the company of fueling the opioid crisis. (Photo by Drew Angerer/Getty Images)

That would amount to blood money, in the opinion of some critics. And it's one reason two dozen states have rejected the deal.

"The settlement agreement basically requires the settlement payments to be made based on the future sales and profits of opioids. That doesn't really feel to me like the right way to do this," Massachusetts Gov. Charlie Baker said this week.

Massachusetts is among several states that have pledged to continue pushing back in court against the company and especially members of the Sackler family, which owns Purdue. On Tuesday, North Carolina became the latest state to sue the Sacklers.

Stamford, Connecticut-based Purdue, cast as a major villain in the opioid crisis in some 2,600 lawsuits brought by state, local and tribal governments, hospitals, unions and others, filed for bankruptcy Sunday in the first step toward putting the settlement into effect.

Under the deal, valued by Purdue at potentially more than $10 billion over time, the Sacklers would give up ownership of the company, and it would be reconstituted as a "public benefit trust." Its profits from opioids, as well as from overdose antidotes and addiction-treatment drugs, would go toward the settlement.

While OxyContin and other prescription drugs like it have what are widely accepted as legitimate medical uses — namely, relieving severe pain — activists and others are troubled by the prospect of the continued sale of Purdue's opioids in the U.S. and overseas.

"It's blood money paying for blood money," said Lynn Wencus, of Wrentham, Massachusetts, whose son Jeff died at 33 of an overdose in 2017. "It's ludicrous. The whole thing would be almost comical if we weren't talking about human lives here."

Opioids, including painkillers like OxyContin and street drugs like heroin and fentanyl, have been blamed for more than 400,000 deaths in the U.S. in the last two decades.

"It's disgraceful," said Ed Bisch, of Pennsauken, New Jersey, who was among the first parents to take on Purdue. His son died of an OxyContin overdose at 18 in 2001. "If they keep on selling OxyContin, there's going to be more and more accidental addicts."

Key lawyers for the local governments have agreed to the tentative deal, as have 24 states, which envision using the money for addiction treatment programs, among other purposes. Twenty-four other states have rejected the settlement. A federal bankruptcy judge can decide whether to approve it, reject it or ask for changes.

This wouldn't be the first time continuing sales of a troublesome product were used to fund a settlement over its toll. More than 20 years ago, the big tobacco companies settled with the states in a deal that partially based their payments on cigarette sales.

Those payments continue to this day. By last year, the master settlement with 46 states had resulted in a payout of $126 billion, with continuing payments of $9 billion a year. As part of the settlement, the tobacco companies agreed to tough restrictions on the use of cartoon characters, product giveaways and billboards.

Prescription opioids are often given to cancer patients in severe pain at the end of their lives and people who have been in accidents or undergone surgery.

If Purdue stopped selling opioids, it might not have a big effect on the supply of the drugs nationally. The company accounts for only a small slice of the market; the vast majority of the opioid pills sold are generics.

Ryan Hampton, who is a Los Angeles-based advocate for people with addiction and is in recovery himself for an opioid habit that he said began with prescriptions for OxyContin, is outraged over the settlement as a whole but said the continued sale of the drug is not the biggest problem.

"The medicine itself is not inherently evil," Hampton said. Besides, he said, "This money is going to have to come from somewhere or there's no money at all."

Like others, Hampton said the settlement doesn't do enough to hold the Sacklers and Purdue accountable and won't deliver enough guaranteed money. (The Sacklers have agreed to put in $3 billion, plus up to $1.5 billion from the sale of their Mundipharma business, which sells opioids around the world.)

If Purdue were to continue selling opioids, the new board running the company, he said, could have representatives from the public health and addiction-advocacy worlds, and restrictive policies on how the drugs would be promoted to doctors.

On the other hand, if the drugs were marketed more strictly, there would be less money for the governments suing Purdue.