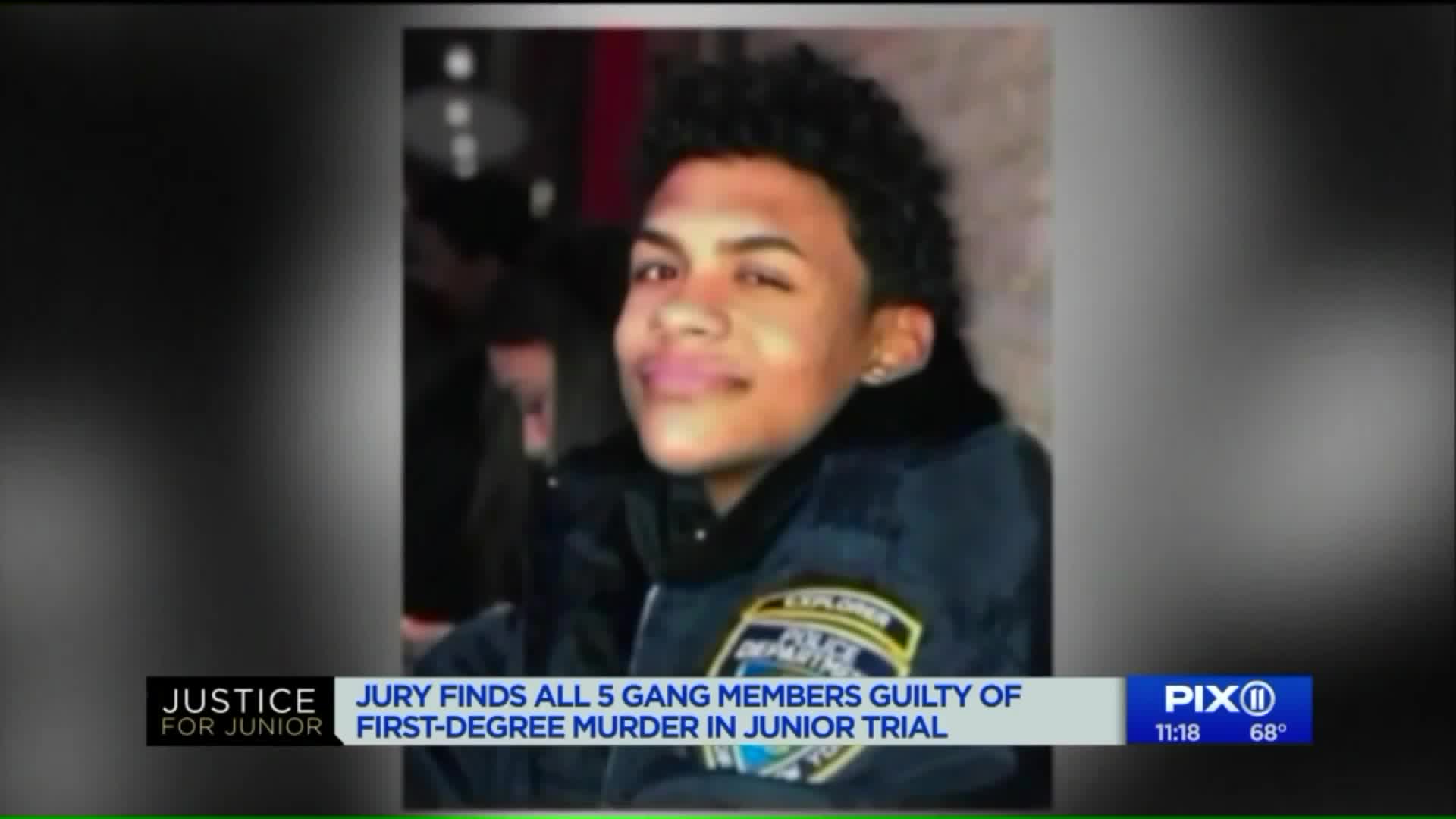 THE BRONX — Jose Muniz was known as the “machete guy” in the vicious gang killing of 15-year-old Lesandro “Junior” Guzman-Feliz in the Bronx, but his lawyer told PIX11 the full story never came out, so Muniz has written a letter to be read at his sentencing next month “to set the record straight.”

Jose Muniz, left, is seen during trial for the murder of Lesandro “Junior” Guzman Feliz, seen right. The teen was killed in June 2018.

Martin Goldberg, defense attorney for 22-year-old Muniz, said the letter, which was translated from Spanish to English, was well done.

Goldberg will read it for Muniz at sentencing on Oct. 11.

Goldberg said the letter talks about the attack and “why it happened, yet apologetic at the same time.”

“He is resigned to his fate,” Goldberg said, and “just wants to set the record straight.”

Goldberg communicated at length with PIX11 Monday, complaining about the narrative surrounding the Guzman-Feliz case from the beginning.

The NYPD was part of the larger community that mourned Guzman-Feliz’ murder early on, reporting the high school sophomore was a member of the police department’s Explorer’s program, which seeks to inspire young people to consider a career with the NYPD.

“All I’ll say is that whole aura around this case was not accurate and I think contributed to the conviction,” Goldberg daig.

The lawyer spoke about the Baby Sunsets, sort of a “training” subset of the Trinitarios gang the defense team tried to attach Guzman-Feliz to.

“Nobody to my knowledge, including the police, ever spoke to members of the sunsets, but I did,” Goldberg texted. “How far did he go in that Explorers program?” the lawyer asked about Guzman-Feliz. “Did he attend regularly?”

A law enforcement source told PIX11 early in the June 2018 investigation Guzman-Feliz was not tied to gang activity and said the teen had no criminal record.

The lawyer found it suspect that Guzman-Feliz left his friend, Jason Velez, in the minutes before his murder, walked past the street that led to his home and “goes to the park where all the sunsets hang out.”

Velez had told PIX11 during an exclusive interview in September 2018 that he was worried Guzman-Feliz was hanging out with the wrong crowd.

Velez moved out of state after Guzman-Feliz’ murder.

“His mother kept telling him not to go to the park,” Goldberg observed of Guzman-Feliz, “Why? What was so important about hanging down at THAT park?”

The lawyer added, “Nobody looked at that either. Again, even if he was involved, it made no difference. This was an unjustified killing, but there was more to it than what the public thought.”

Guzman-Feliz’ teachers and dean at Dr. Richard Izquierdo High School remembered the teen as someone who was doing well in school, and always friendly to his classmates and educators.

A jury of 11 women and one man sometimes wept while watching the graphic surveillance footage of Guzman-Feliz being chased — and then dragged — from a Bathgate Avenue bodega on June 20, 2018.

The teen was stabbed on the sidewalk by five gang members.

Muniz did not inflict the fatal wound.

The autopsy showed a knife sliced the teen’s jugular vein in the neck, before the 15-year-old “bled out” outside a hospital security booth.

Muniz’ lawyer even argued Muniz kept the machete blade flat, so Guzman-Feliz would not be badly hurt during the assault.

The Los Sures and Bad Boys crews were allegedly acting on orders from their division leaders to hurt a rival member in the Trinitarios gang.

“I think the anger the jurors [felt] was so overwhelming where they ignored the evidence and it contributed to the conviction,” Goldberg said.

On the day of his conviction for first- and second-degree murder, conspiracy, gang assault and weapons possession, on June 14, Muniz dramatically yelled on his way out of the courtroom “Hasta la Murte” — Til Death — making his solidarity with the gang very clear.

His defense attorney finds unfairness with plea deals made by two key witnesses: Kevin Alvarez, who was seen punching and kicking Guzman-Feliz before pulling him out to the sidewalk, and Michael “Sosa” Reyes, one of the first men to chase Guzman-Feliz into the bodega.

“I understand the cooperators deserve less time that the five who went to trial. But really where is the equity? The DA thinks no jail time is appropriate for Alvarez who kicked, punched, and dragged (him) out of the deli. Or Sosa who said ‘drag him out, there are cameras in there.’ Is what Muniz did, clearly turning the knife flat, deserving of life and the cooperators get nothing? Not even a criminal record? That’s the system….nobody will care because of (who) they are and who they think Jr was. And part of that was the inaccurate characterization of Jr in the press.”