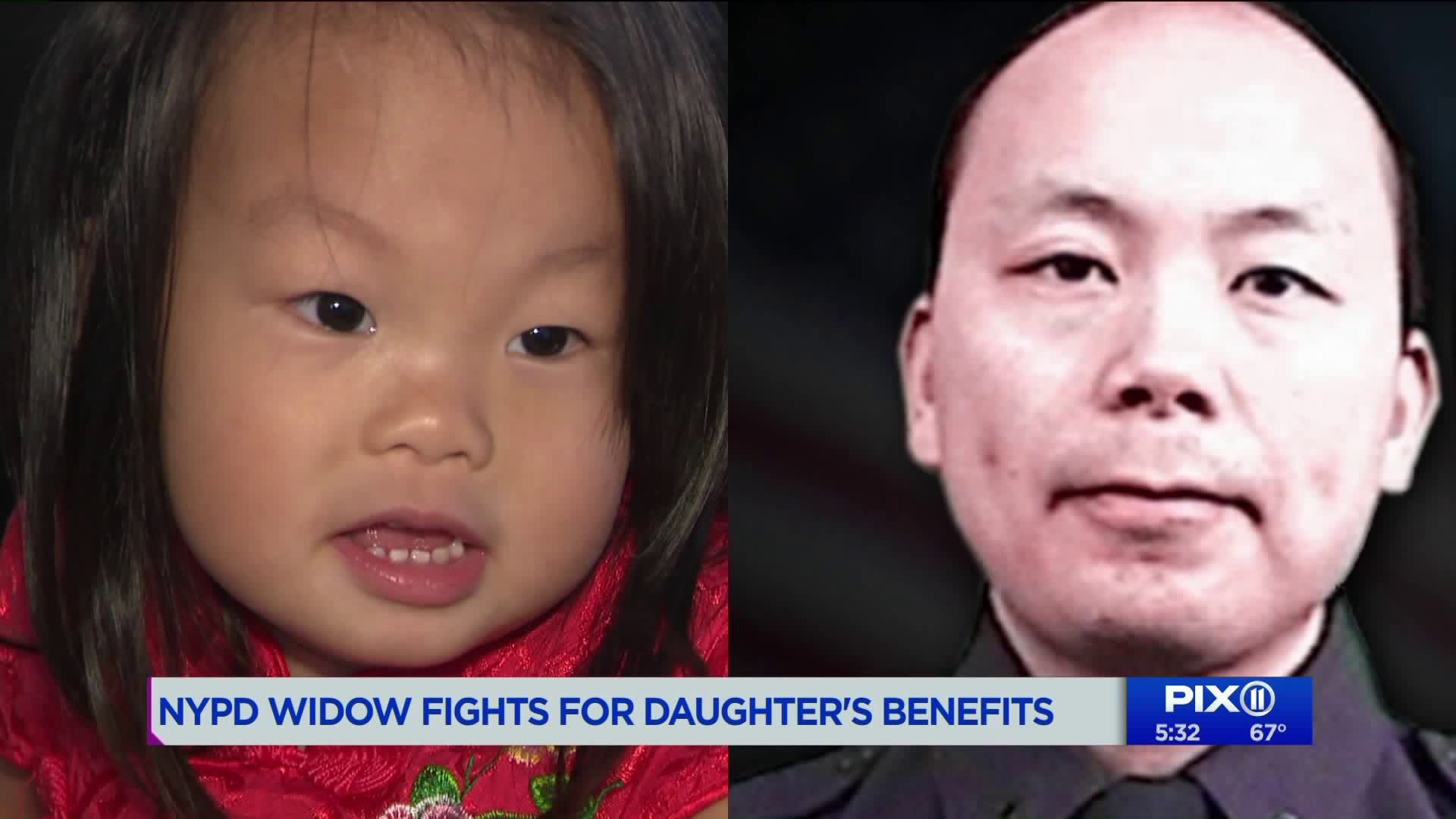 Angelina Liu turned 2 years old in July a miracle baby, after her father was killed in the line of duty. So why is she being denied "survivor" benefits? Mary Murphy investigates.

BROOKLYN — To look at two-year-old Angelina Liu, there doesn’t seem any doubt that she’s the biological daughter of slain NYPD Detective Wenjian Liu.

“Nobody can say my daughter Angelina is not his child," said her mother, Pei Xia Liu. "She looks exactly like him. You don’t even have to do any tests! By looking at her, you can see that’s Wenjian’s child.”

But under current state law, Angelina is not recognized as Wenjian Liu’s daughter, and a state senator is looking to change that.

“In this case, state law is just woefully out of date,” state Senator Andrew Gounardes of Brooklyn said Friday.

Angelina was born on July 25, 2017, nearly three years after her father and his partner, Rafael Ramos, were assassinated in their patrol car by a Brooklyn housing project.

On the evening Wenjian Liu was gunned down by a crazed gunman who took a bus from Baltimore, emergency room doctors asked Pei Xia Liu if she wanted to preserve her husband’s sperm.

The couple had only been married three months.

“We always wanted to raise and have a family,” Pei Xia Liu said. “And he was the only child!”

Liu was the first Asian American NYPD officer killed in the line of duty, and his death left his parents heartbroken.

Pei Xia Liu said she wanted to carry on her husband’s name.

So, in 2016, she began the painful process of getting shots to facilitate in vitro fertilization.

The procedure worked the first time it was attempted.

Pei Xia Liu said she’s been close to other “line of duty” widows with small children, and they told her Angelina should be eligible for Social Security “survivor’s” benefits.

But Liu showed us the Social Security letter that turned her down — twice.

The letter states, “Angelina Liu is not entitled to child’s benefits because the facts we have do not show that she meets the definition of child under state or federal law.”

Part of the problem is with an archaic New York State law.

“This would be ok if he [Wenjian Liu] had signed a consent form 7 months before he passed away,” state Senator Gounardes said. “There was no way to anticipate a situation like this. When an officer is shot down in the line of duty, and we have so few precious minutes to stabilize him or extract reproductive materials, the law doesn’t deal with this situation adequately.”

Gounardes said he will seek to tweak the state law, so that if a partner proves she was married, the child would be “entitled to the full array of benefits under Social Security.”

“She needs to be respected and acknowledged,” Pei Xia Liu said of little Angelina.

Pei Xia Liu said the the little girl is “caring” like her father, “very neat,” and likes to read, just like dad.

Pei Xia Liu has started the Detective Wenjian Liu Foundation and the first benefit dinner will be held this October 23rd.

“He was my soul mate, and we were so close to each other,” Pei Xia Liu said. “I believe he would be the best father of all.”