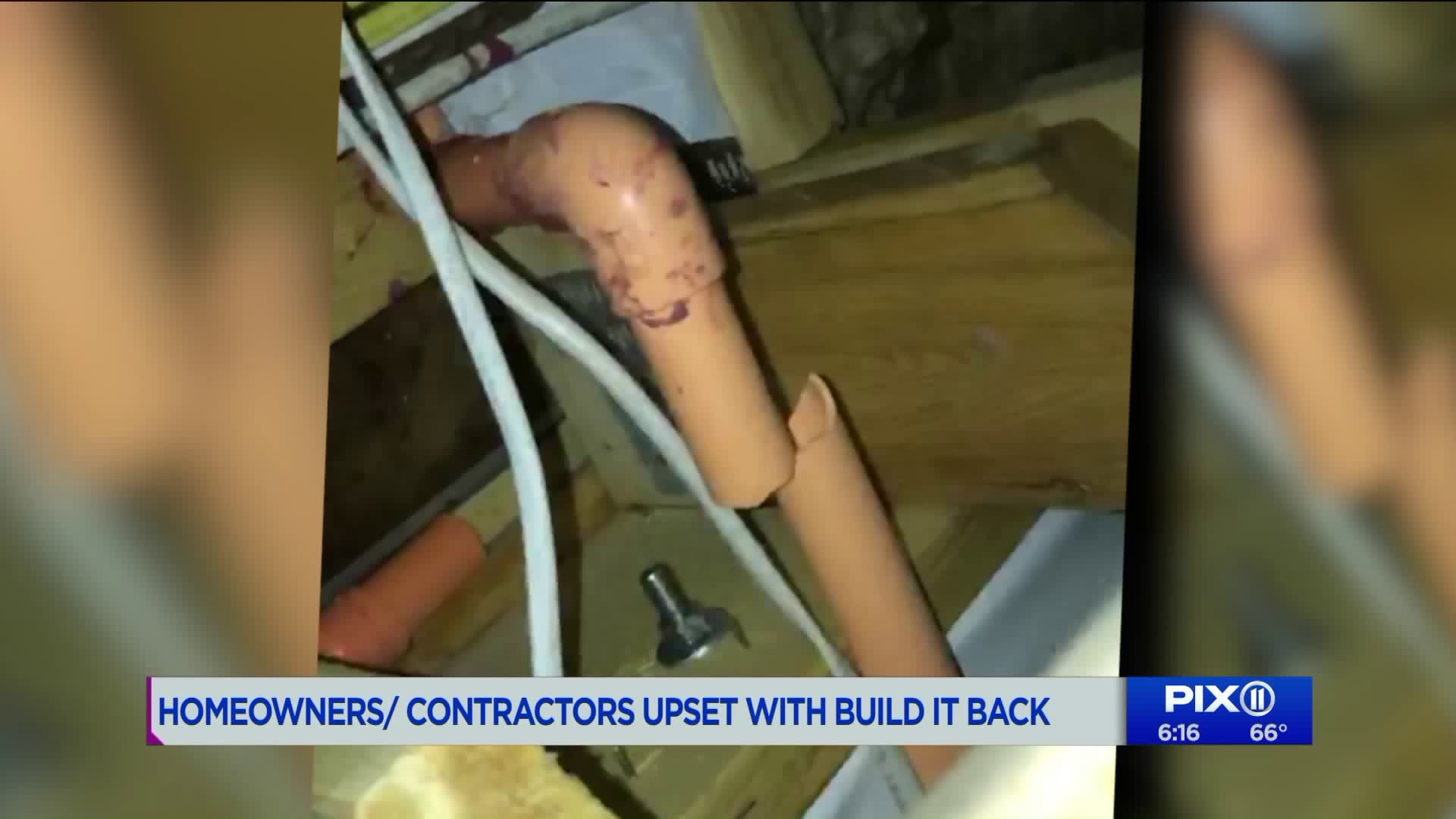 Mary Murphy investigates why some contractors say they weren`t paid for the work, and why some homeowners are unhappy with the product.

STATEN ISLAND — Diane and Tom Doyle of Staten Island said they spent about $100,000 to renovate their solidly-built, brick house after Super Storm Sandy wrecked the inside.

Then, representatives from the “Build It Back” program told the couple the city would have to “raise” the house, because it faced the possibility of getting flooded again.

Problem was: the house was brick and couldn’t be raised.

So, Diane and Tom Doyle ultimately agreed to accept a shingled, modular home at their address on Winfield Street, after their brick home was knocked down.

“They were supposed to have union workers here,” Tom Doyle said, standing in the family kitchen. “I could have done better than they did, and I’m not handy.”

Within nine months of moving into the new house, the couple said they were on a cruise when their daughter called them in a panic.

The house was flooding…. but not because of Mother Nature.

“One pipe! It was a sprinkler pipe in the attic,” Diane Doyle said, “and just spewed water everywhere.”

A contractor friend took cell phone video in the attic and noted the pipe was not wrapped in insulation to protect it from the cold—and there were large gaps in the attic that could have allowed animals to get in.

When the Doyles demanded answers from the out of state contractor, located in Texas, they told PIX11 the contractor’s response was, “You have to prove it was our negligence.”

The Doyles contacted PIX11, after our first story recently aired concerning Staten Island families that weren’t allowed to move back home, because “Built It Back” contractors refused to get them a Certificate of Occupancy.

Deputy Press Secretary, Laura Feyer, from the Mayor’s office disputed Gary Allen’s complaints, stating “The claim that the city owes this contractor more money is blatantly false, the liens on these homes are unacceptable, and the contractor should be ashamed. The city is actively working to remove these liens and complete the certificate of occupancy.”

After the Gary Allen report, three “Build It Back” contractors contacted PIX11 to say the city is being deceptive about payments.

The company is owned by his wife.

“We’re a minority and woman- owned business,” Perry added, noting the city tries to give business to companies like his.

“We’re absolutely not milking the system,” Perry said, telling PIX11 the city provided a “pricing schedule” in advance of the jobs.

His company was involved in 30 Sandy homes, and he said he hasn’t received the final ten percent of his payment.

The contractors have considered putting liens on the homes they’ve completed but are hoping to get paid.

Everett Perry said city supervisors from “Build It Back” reached out to him, after PIX11 aired our recent story.

“Since your interview,” Perry said, “it’s been going into an overdrive.”