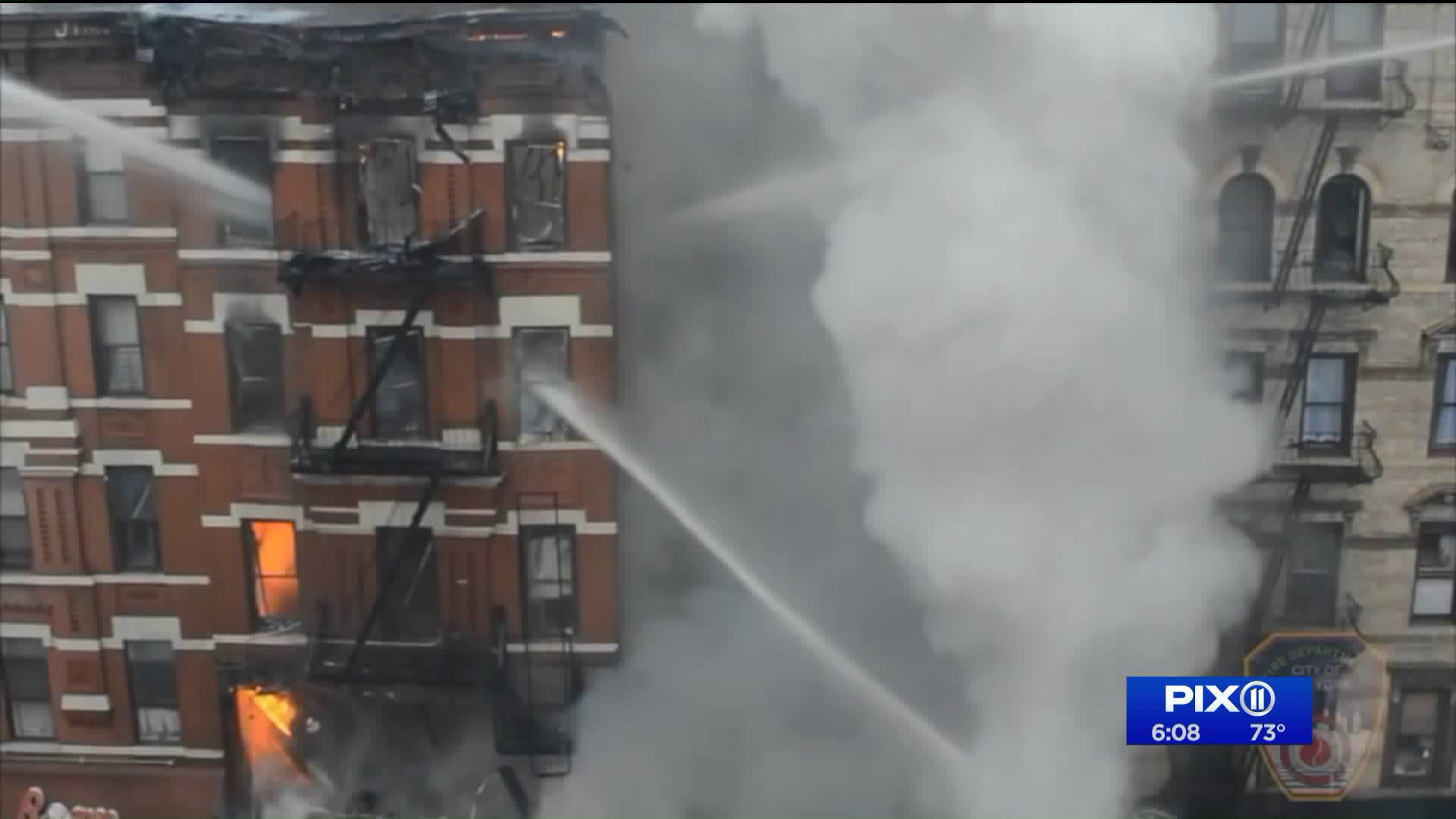 Opening statements have begun in the trial related to the 2015 gas explosion in Manhattan`s East Village that killed two people, injured 19 others and leveled three buildings. Prosecutors have charged a landlord and two workers with manslaughter and criminally negligent homicide for rigging an illegal gas line that triggered the blast on Second Avenue.

EAST VILLAGE, Manhattan — It leveled three buildings, killing two innocent people and injuring 13 others in the process. Now, the 2015 gas explosion and fire in the East Village is in sharp focus as the trial begins for the owner of the buildings where the conflagration broke out, as well as for two contractors who may have knowingly installed an illegal gas line.

The families of the two victims testified in an emotional hearing in court on Monday.

“He was a beautiful, happy guy," said Nixon Figueroa, outside court, about his son, Nicholas, who was killed in the explosion. "Proud having him as a son."

Nicholas Figueroa was 22 when 119, 121 and 123 Second Avenue went up in flame on March 26, 2015. Figueroa, a former Eagle Scout who'd graduated from college a few months before, had been on a lunch date in a sushi restaurant located on the ground floor of one of the buildings.

A busboy at the restaurant, Moises Locón Yac, 27, was also killed in the explosion and conflagration. Locón Yac's brother testified in court that the restaurant worker was burned beyond recognition, and that he'd had to identify his brother's remains at the morgue based on a photograph the medical examiner had provided.

"They did the crime, they should pay the price [by] going to jail," Figueroa told reporters outside of the courtroom.

He was referring to the people on trial. Maria Hrynenko, 59, owned two of the East Village buildings destroyed by the the gas explosion -- 119 and 121 Second Avenue.

Prosecutors say that an illegal, improperly installed gas line serving her buildings had been pieced together by two other people on trial now: contractor Dilber Kukic, 44, and plumber Athanasios Iaonnidis, 63.

They face manslaughter, criminally negligent homicide, assault and other charges.

The gas explosion and fire also destroyed 123 Second Ave., which is adjacent to the buildings Ms. Hrynenko owns.

None of the defendants had anything to say outside of court, but the attorney for Hrynenko said in his opening statement that she broke no laws. All she'd done, he told the jury, was legally hire a licensed contractor, who, in turn, carried out the potentially illegal work that led to the explosion.

Meanwhile, the contractors' lawyers said that the deadly explosion and fire were Con Edison's fault. The utility had repeatedly inspected the site over the year preceding the explosion, in response to complaints of a gas smell.

Con Ed had even inspected on the morning of the explosion. Each time, according to prosecutors, the utility shut off the gas. However, the district attorney's office argues, the contractors built their illegal gas lines in a secret, locked room, concealed from Con Ed inspectors. From there, they were able to illegally turn the gas line back on, prosecutors said, adding that the landlord, Hrynenko, knew about the set up.

Manhattan District Attorney Cy Vance attended opening arguments on Monday. He and his assistant D.A.s argue that the jury should find the defendants guilty.

"We leave it to the jury system," Figueroa said, "and hopefully we get the justice."