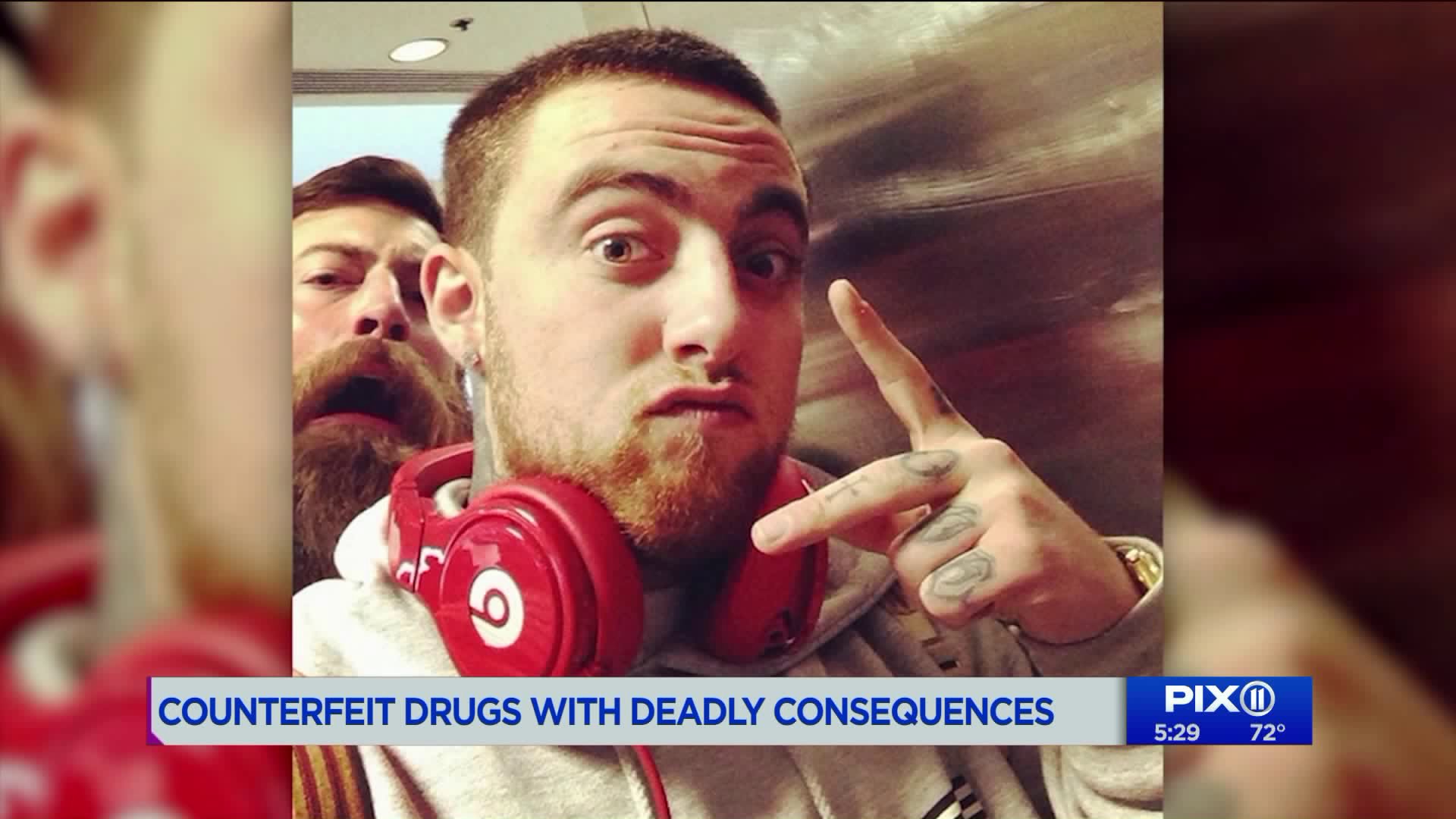 A Los Angeles man was arrested Wednesday on charges that he sold counterfeit opioid pills to Mac Miller two days before the rapper died of an overdose. A Drug Enforcement Agency affidavit unsealed after the arrest of Cameron James Pettit alleges that Miller asked him for oxycodone and other drugs, but on Sept. 5, 2018, Pettit gave Miller counterfeit oxycodone pills laced with the powerful opioid fentanyl.

NEW YORK — New York City hasn't had a high-profile celebrity death that’s been linked to counterfeit pain pills, but we do have fake pill factories in our midst.

Last October, a Bronx building superintendent was accused of using his boiler room as a manufacturing facility to press phony oxycodone pills; they were made with deadly fentanyl.

Fentanyl is a synthetic opiate—very cheap to produce—that’s 50 times more powerful than heroin.

Their complaint said an alleged L.A. madame also provided Mac Miller with blue pills the same day. Tests on her pills later indicated they did not contain fentanyl.

But Pettit’s pills allegedly did.

“It appears that Mac Miller snorted this fentanyl concoction, two days before his overdose death,” said Thom Mrozek, the chief spokesperson for the United States Attorney Central District in California.

Miller, who was born Malcolm James McCormick, had just released a new album, “Swimming,” before he died.

He was prepping for a 26-date fall tour.

The five albums he produced in his short career always debuted in the Top Five on Billboard.

Miller often rapped about his struggles with addiction and depression.

Pettit, who had a previous drug arrest, seemed to know trouble lay ahead when he learned about Mac Miller’s death.

“Most likely, I will die in jail,” he texted to a friend.

The message was featured in the federal complaint filed by prosecutors in court Wednesday.

Miller overdosed from a combination of fentanyl, cocaine and alcohol.

He was one of several music stars to die from a fentanyl overdose, but his case is one of the few where somebody was charged with a crime.

Back in 2016, when Prince was found dead from a drug overdose in his Minnesota home, a toxicology report indicated there were “exceedingly high” amounts of fentanyl in his system.

A doctor who had prescribed oxycodone in the name of Prince’s bodyguard later paid a $30,000 fine.

But detectives never discovered the source of the fentanyl that Prince ingested after nearly two years of investigating.

Then, in the fall of 2017, rocker Tom Petty died from a prescription drug overdose at UCLA Medical Center.

He had been taken there by ambulance from his Malibu home.

Investigators from the coroner’s office thought the fentanyl in Petty’s system could perhaps have been from a counterfeit source, but they ultimately closed the case.

The music star was wearing a fentanyl patch at the time of his hospital admission and his family said he was suffering from severe hip pain.

The agents who investigated Mac Miller’s case said they have clear evidence of wrongdoing.

Pettit remained in a California jail Thursday. If convicted, he faces 20 years in prison.