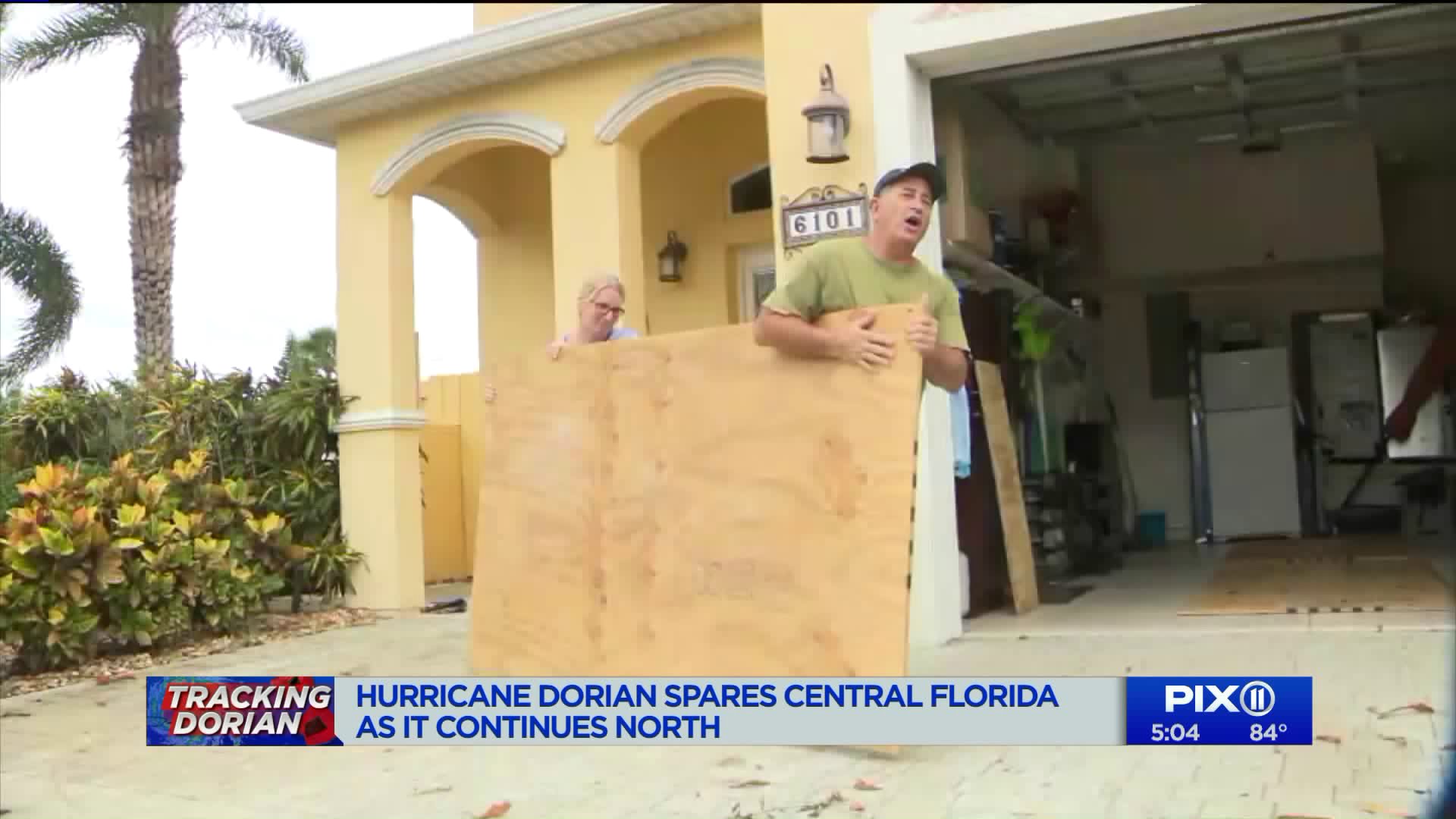 The National Hurricane Center reduced the threat of a direct hit on Florida and its $1 trillion economy, the fourth-largest in the country behind California, Texas and New York.

Tropical storm conditions continue along portions of the northeastern coast of Florida as Dorian continues to make its slow trek toward the U.S.

The National Hurricane Center says the deadly storm was centered at 5 a.m. EDT Wednesday about 90 miles (144 kilometers) east of Daytona Beach, Florida. It has top sustained winds of 105 mph (168 kph) as a Category 2 hurricane. The storm is moving north northwest at 8 mph (12 kph), tracking offshore and nearly parallel to Florida's Atlantic shoreline.

Some weakening is expected during the next couple of days but Dorian is expected to remain a powerful hurricane.

The Miami-based weather center says a turn toward the north is forecast by Wednesday evening, followed by a turn toward the north-northeast on Thursday morning. The core of Dorian will move dangerously close to the Florida east coast and the Georgia coast through Wednesday night. The center of Dorian is forecast to move near or over the coast of South Carolina and North Carolina Thursday through Friday morning.

By midday Tuesday, Dorian had been downgraded to a Category 2 hurricane, and forecasts were lessening the threat of a direct hit on Florida.

Still, more than 2 million people in Florida, Georgia and the Carolinas had been warned to evacuate.

Parts of the Walt Disney World resort in Orlando, Florida, closed early on Tuesday. Airports in Orlando, Palm Beach and several smaller cities remained closed, and most flights in Fort Lauderdale were scrubbed too. Florida accounted for most of the 1,800 U.S. flights canceled by mid-afternoon in the East.

"It generally looks like we dodged a bullet," Sean Snaith, director of the economic forecasting institute at the University of Central Florida, said Tuesday. "These temporary shutdowns have some effect, but it's not going to move the needle in terms of employment or economic growth."

Dorian caused catastrophic flooding and at least five deaths in the Bahamas .

But the National Hurricane Center reduced the threat of a direct hit on Florida and its $1 trillion economy, the fourth-largest in the country behind California, Texas and New York. Instead, the storm was expected to brush close to South Carolina and maybe North Carolina too on Thursday or Friday.

Even as Dorian weakened approaching the U.S. mainland, other storms are forming in the Atlantic, and there could be additional powerful hurricanes this fall. The National Oceanic and Atmospheric Administration recently raised its forecast for the likelihood of an above-normal hurricane season, including two to four major hurricanes — winds above 110 mph — through November.

The Congressional Budget Office estimates that hurricanes cause about $28 billion a year in damage in the U.S., and since 2005, the government has borne about 60% of the cost, or $18 billion a year.

It's difficult to predict where any particular storm will make landfall, but hurricanes are growing more damaging partly because of increased development in coastal areas.

Maria and Irma, the back-to-back hurricanes in the Caribbean and Florida in 2017, caused $140 billion in damage. Hurricane Harvey flooded Houston that same year at a cost of $125 billion. The most damaging hurricane in U.S. history remains Katrina, in 2005, which flooded New Orleans and killed more than 1,800 people.

Florida's tourism industry has taken gut punches before and bounced back. In the first six months of this year, the state saw a record 68.9 million visitors, a 6% increase over the same period last year, according to the governor's office.

"Florida has continued to see visitation numbers break records year after year, whether it's in the wake of hurricanes or the Zika virus or red tides," Snaith said. "These events aren't great for marketing, but promoters in the (tourism) industry get out in front of stuff like that and try to erase any temporary damage."

Visit Florida, the state's tourism agency, has been promoting travel to parts of the state, including the Gulf Coast, that are not under hurricane threat.

The storm's threat prompted organizers to move a major college football game, Boise State against Florida State, from Jacksonville to Tallahassee, about 160 miles to the west. That hurt tourism in Jacksonville over the Labor Day weekend, although presumably businesses in Tallahassee got a boost. The tourism agency Visit Jacksonville said it was prepared to help local tourism businesses "get back up and running quickly."

Businesses that shut down, even just briefly, may seek interruption benefits from their insurers. Fred Karlinsky, an attorney specializing in insurance matters at Miami-based Greenberg Traurig, said the duration of the closure matters more than whether Dorian comes ashore.

"It's a very important coverage, and it pays out," he said.

Last week, many Florida hotels suspended their cancelation policies because of the approaching storm.

"It looks like things are much less threatening. It's a good day in Florida," said Amanda Handley, a spokeswoman for the Florida Restaurant & Lodging Association. She cautioned, however, that there was still a threat of high winds, heavy rain and storm surges along the Atlantic coast.

Florida's neighbors might not share the relief. Up the coast and across the state line in Folly Beach, South Carolina, workers were hurriedly boarding up restaurants and shops.