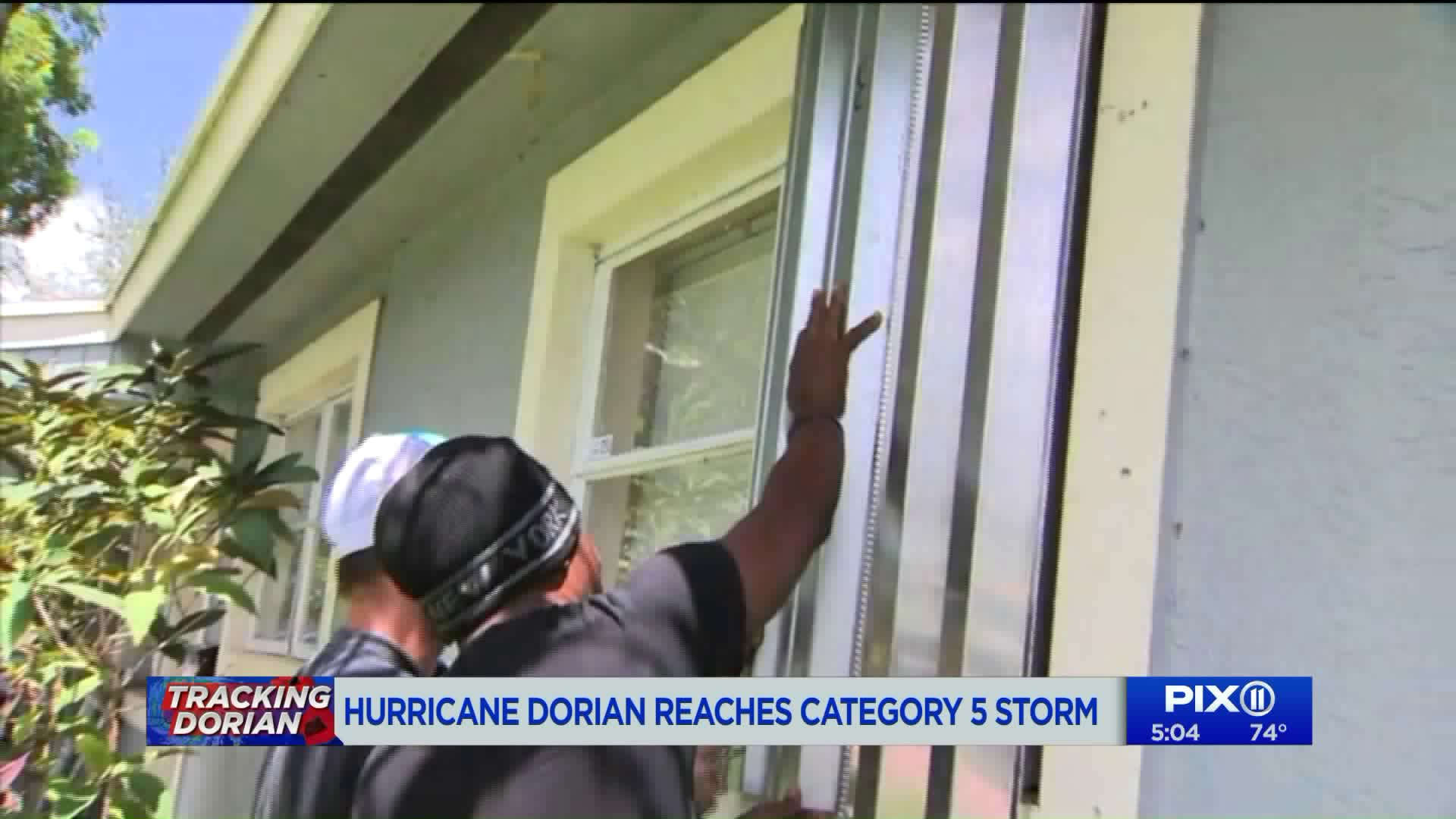 For Florida, just a handful of miles may make a huge difference in Hurricane Dorian`s slow dance with the coast. The National Hurricane Center forecasts Dorian to be 40 to 50 miles off the Florida coast on Tuesday and Wednesday, with hurricane-force wind speeds extending about 35 miles to the west.

For Florida, just a handful of miles may make a huge difference in Hurricane Dorian's slow dance with the coast.

The U.S. National Hurricane Center says a hurricane warning has been issued for a stretch of Florida's east coast as powerful Hurricane Dorian approaches.

The first hurricane warning and watch in Florida comes as Hurricane Dorian is battering parts of the Bahamas with top sustained winds of 185 mph (295 kph).

The National Hurricane Center forecasts Dorian to be 40 to 50 miles off the Florida coast on Tuesday and Wednesday, with hurricane-force wind speeds extending about 35 miles to the west.

But that's just one point that forecasters have to choose to place the monstrous storm that packed 185 mph winds on Sunday. It could be within 100 miles of that point, which is why the hurricane center uses — and emphasizes — a shaded cone of uncertainty.

And much of the Florida coast is inside that cone.

"This thing is perilously close to the state. I think we should all hope and pray for the best, but we have to prepare that this could have major impacts on the state of Florida," said Florida Gov. Ron DeSantis. "If you look at the National Hurricane Center's current track, I think it ends up within 30 miles of the coast of Florida. Well guess what? You do just a touch of a bump one way or another, and you have a dramatic difference all of a sudden."

"The cone is so important," Graham said.

And making matters more touch-and-go is that with every new forecast, "we keep nudging (Dorian's track) a little bit to the left," which is closer to the Florida coast, he said.

Dorian is a powerful but small hurricane with hurricane-force winds Sunday only extending 29 miles to the west, but they are expecting to grow a bit. That makes forecasting the storm's path along the coast — either just off the coast, skirting it or moving inland with a direct hit — delicate and difficult. Just a few miles west or east makes the difference between devastation and bad but not horrible damage, meteorologists said.

"Where it doesn't directly hit, it's not going to be a huge problem," Colorado State University hurricane researcher Phil Klotzbach said.

With a big, sloppy hurricane — say 50% larger in size — all of Florida would be under a serious threat, but that's not the case, said University of Miami hurricane researcher Brian McNoldy.

This is what makes this a nightmare for forecasters, McNoldy said.

It's a combination of the small size, close-in track, like Matthew in 2016, and weak steering currents. That means just a smidge of a movement days ahead of time, while Dorian is in the Bahamas, can reverberate and mean a direct hit or not, said private meteorologist Ryan Maue.

That can happen just because of the timing of when Dorian's eyewall collapses and is replaced, which happens normally in storms.

Adding to that problem is Dorian's slow, almost snail-like pace. What initially looked like a Labor Day storm for the U.S. is now approaching Tuesday and Wednesday.

"People are getting impatient with this," McNoldy said. Because the threat seems to keep sticking around, it could be a problem getting the right message across, he said.

Klotzbach said he thinks the U.S. East Coast will get "scraped," but Dorian will stay just offshore, something Maue agrees with.

Residents along Florida's coast are relieved that the forecast, for now, doesn't have Dorian making landfall in Florida, but are still preparing for the worst.

Kevin Browning in Vero Beach has put up hurricane shutters, bought a generator and is stocked with supplies.

"I'm thanking God, now, that it's turned a little bit towards the east, but that's a forecast, and we never know. I'm just praying and trying to make sure that everybody's safe. I feel for the Bahamas and I'm praying for them, and I thank God it's not coming directly to us right now."