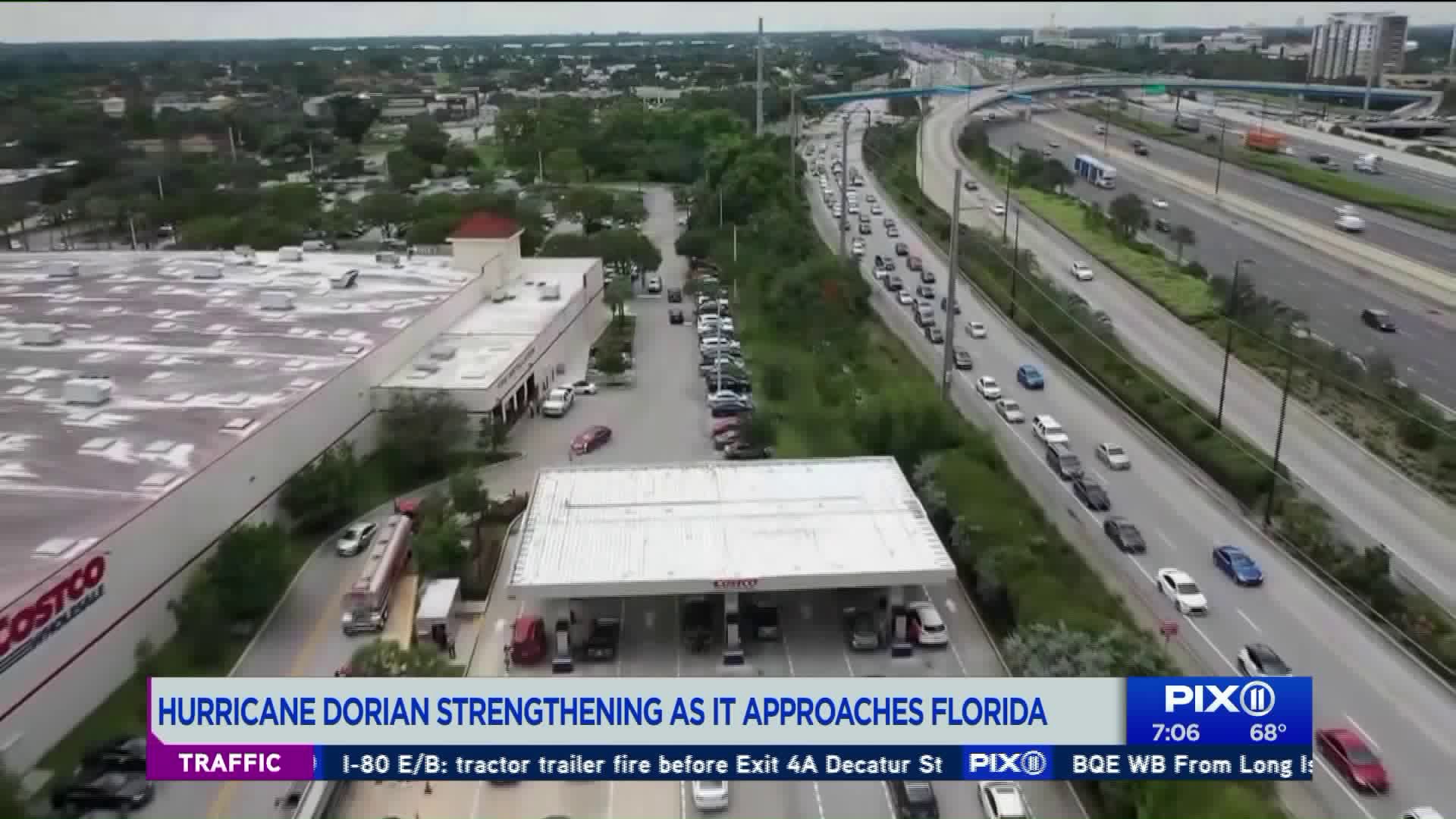 The National Hurricane Center said the Category 2 storm is expected to strengthen into a potentially catastrophic Category 4 with winds of 130 mph and slam into the U.S. on Monday somewhere between the Florida Keys and southern Georgia a 500-mile stretch that reflected the high degree of uncertainty this far out. 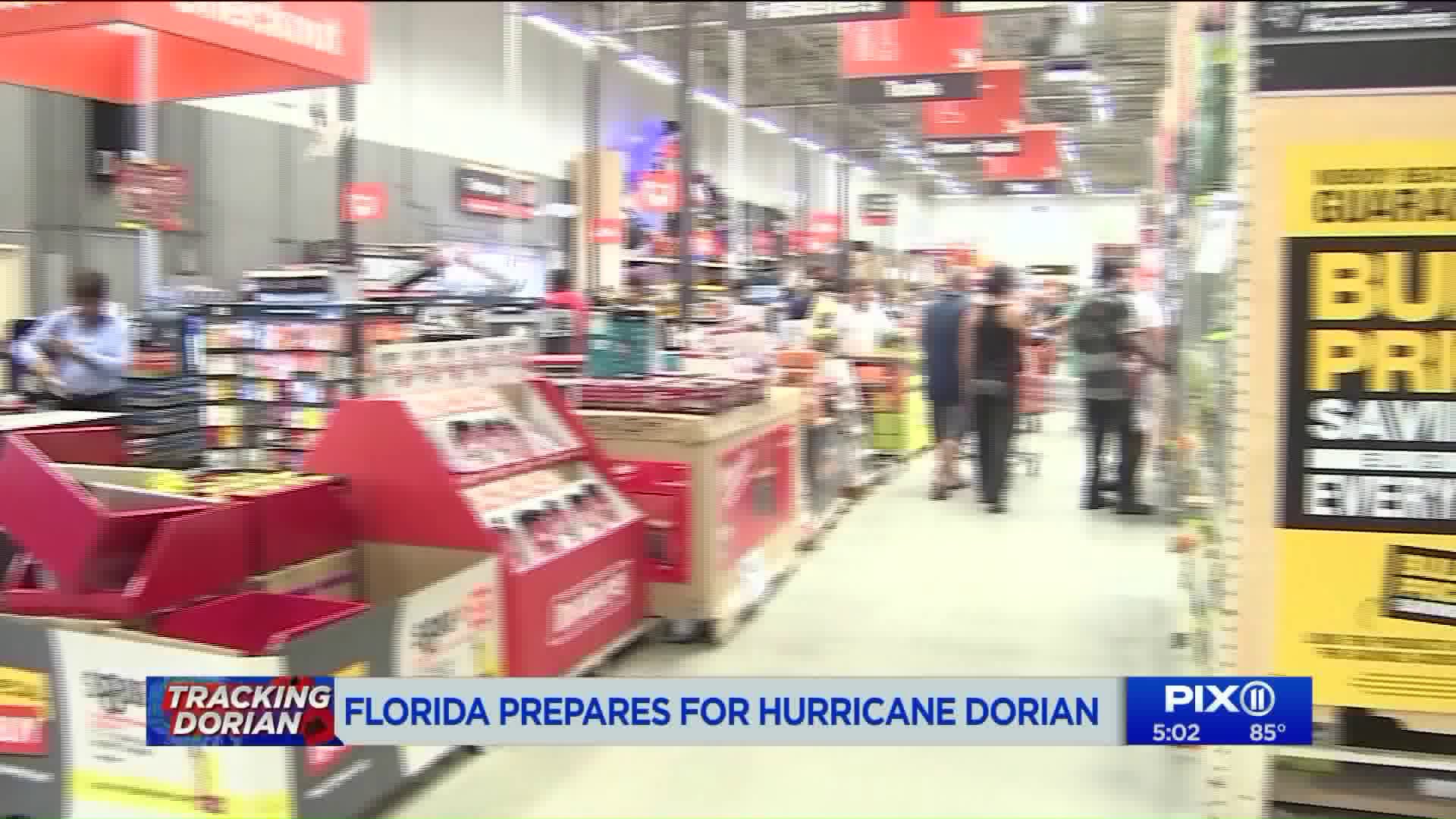 MIAMI — Unsure where Hurricane Dorian is going to land over Labor Day weekend, many Florida residents faced a sense of helplessness as they prepared for what President Donald Trump said could be an "absolute monster" of a storm.

As residents up and down the 500 miles of Florida’s coastline try to find gas, tempers are running short.

One resident who got to the pumps only to find them already spent, covered in telltale plastic bags on the handles bemoaned, "We need gas. What are we going to do with out gas? We need to run generators. We need to run our cars."

It's a similar story for other supplies.

Lines for a Costco in Davie, Florida trickled onto the freeway. More lines awaited them once they were parked and had to grab a cart just to get inside the warehouse store.

Hurricane Dorian, continues its slow churn to the east coast.

"You should have seven days of food and water and medicine as part of your plan."

Growing bigger, and more powerful — now a Category 2 — forecasts show the storm could possibly grow to a devastating Category 4 as residents have been clearing shelves of generators and other supplies.

"All indications are it's going to hit very hard and it's going to be very big," Trump said in a video he tweeted Thursday evening, comparing Dorian to Hurricane Andrew, which devastated South Florida in 1992.

Predictions for Dorian are for it to be one of the worst hurricanes to hit the east coast in decades.

The National Hurricane Center said the Category 2 storm is expected to strengthen into a potentially catastrophic Category 4 with winds of 130 mph and slam into the U.S. on Monday somewhere between the Florida Keys and southern Georgia — a 500-mile stretch that reflected the high degree of uncertainty this far out.

"If it makes landfall as a Category 3 or 4 hurricane, that's a big deal," said University of Miami hurricane researcher Brian McNoldy. "A lot of people are going to be affected. A lot of insurance claims."

With the storm's track still unclear, no immediate mass evacuations were ordered. Along Florida's east coast, local governments began distributing sandbags, shoppers rushed to stock up on food, plywood and other emergency supplies at supermarkets and hardware stores, and motorists topped off their tanks and filled gasoline cans. Some fuel shortages were reported in the Cape Canaveral area.

The National Hurricane Center's projected track had the storm blowing ashore midway along the Florida peninsula, southeast of Orlando and well north of Miami or Fort Lauderdale. But because of the difficulty of predicting its course this far ahead, the "cone of uncertainty" covered nearly the entire state.

Forecasters said coastal areas of the Southeast could get 5 to 10 inches of rain, with 15 inches in some places, triggering life-threatening flash floods.