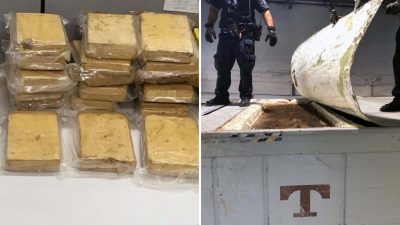 70 kilograms of suspected cocaine worth more than $10 million was seized in the Bronx.

HUNTS POINT, the Bronx — At least one person was arrested after 70 kilograms of cocaine were found inside a vehicle as it left a Bronx warehouse, authorities said Friday.

The DEA estimated that the black market value of the suspected cocaine seized at nearly $2.5 million wholesale value and over $10 million street value.

Miguel Marte-Veras was taken into custody and is scheduled for arraignment Friday in Manhattan Criminal Court on charges of operating as a major trafficker and criminal possession of a controlled substance.

Agents and officers found two large black suitcases inside the SUV being driven by Marte-Veras and recovered 70 brick-shaped packages — each package was heat-sealed with the appearance of a kilogram of narcotics, authorities said.

A search was also conducted on the warehouse after a warrant was issued, where police found a refrigerated container holding rotted bags of papayas, pallets of cartons of oregano and coconuts inside the container. A Port Authority K-9, "Balu", alerted the presence of narcotics, and officers later found a concealed compartment on top of the container.

“This investigation uncovered a commercial warehouse close to the busy Hunts Point markets that served as a front for international narcotics importation. The sheer amount of cocaine seized in one week reflects the magnitude of this drug operation,” said Special Narcotics Prosecutor Bridget G. Brennan. “Despite the thousands of trucks that pass through the area each day, our dedicated partners in the New York Drug Enforcement Task Force successfully disrupted a major narcotics supply route.”