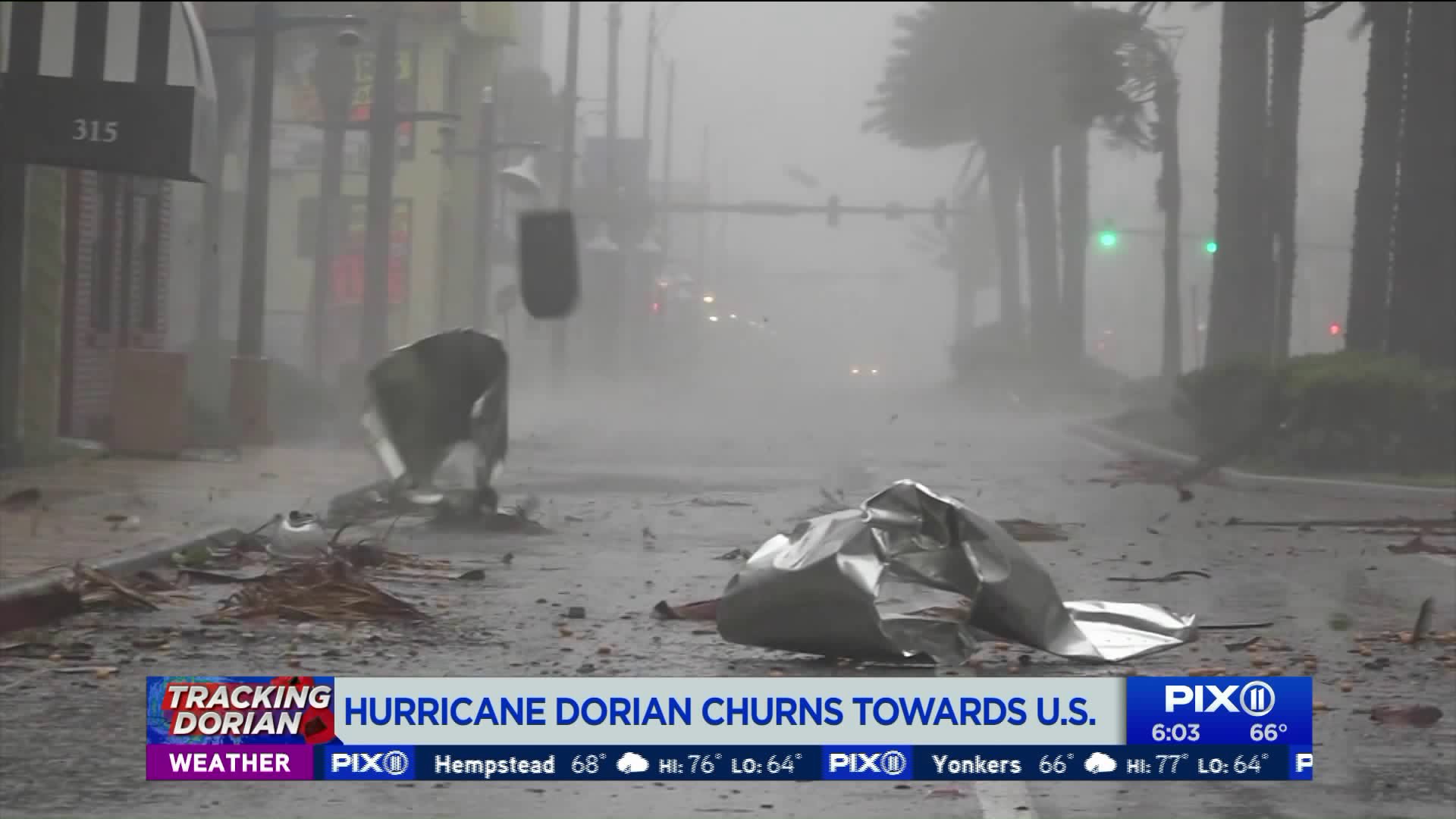 The Caribbean islands will get a break Thursday as Hurricane Dorian moves away from land and into open water where it is forecast to grow into a major storm over Labor Day weekend before landing in Florida. As of Wednesday night, Dorian was 90 miles north of San Juan, Puerto Rico, and was moving northwest at 13 mph. The storm is expected to continue northwest Thursday and then potentially turn more western starting Friday evening, according to CNN meteorologist Rob Shackelford. 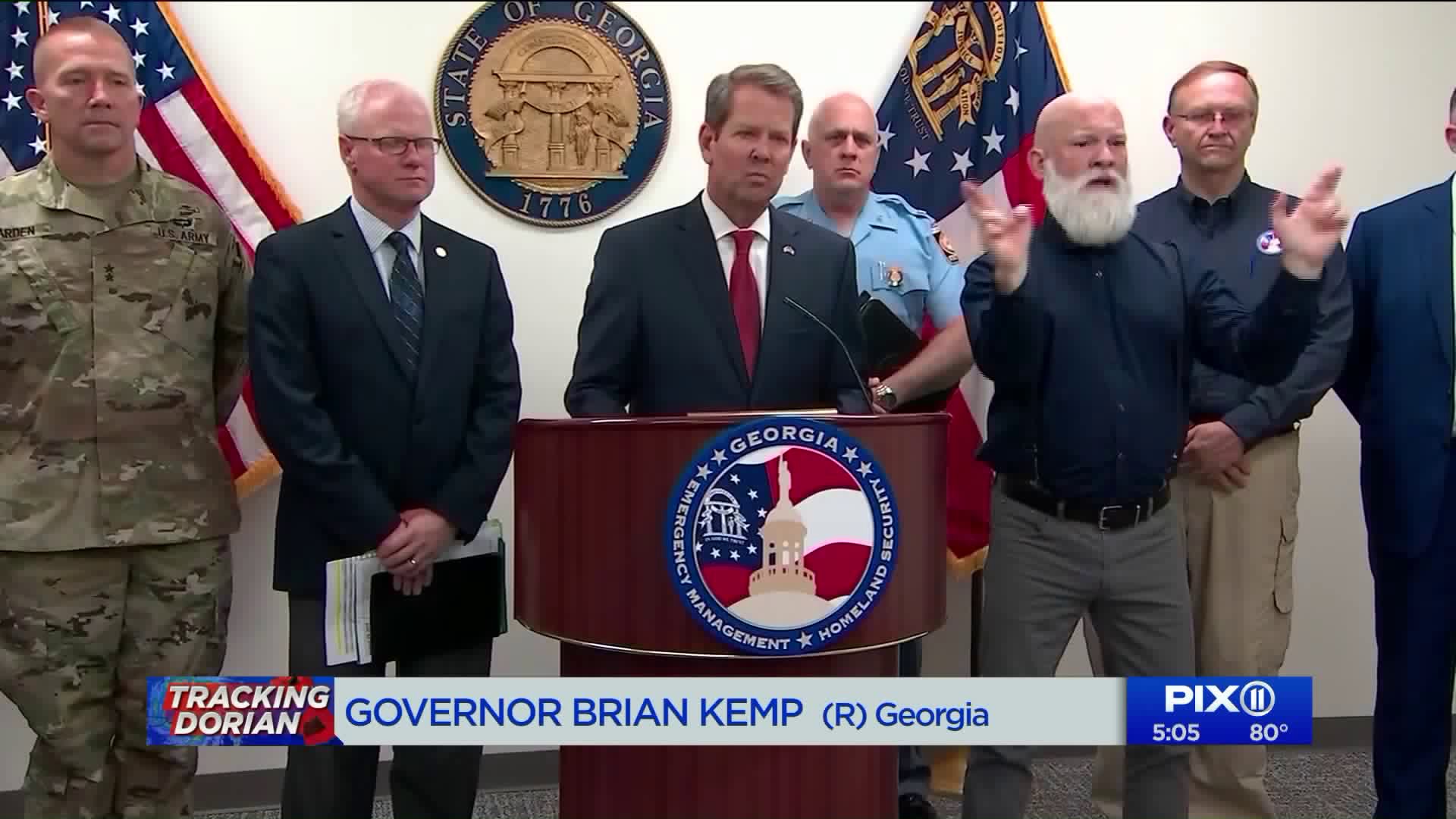 Hurricane Dorian is now forecast to be a Category 4 storm -- with sustained winds of at least 130 mph -- when it makes its expected landfall in the US on Monday, likely somewhere along Florida's Atlantic coast, the National Hurricane Center says.

Dorian, having swept across the British and US Virgin Islands and whipped Puerto Rico with rain Wednesday, was moving northwest in the Atlantic Thursday morning with sustained winds of up to 85 mph.

Warm waters are expected to strengthen Dorian over the next few days. It's on track to smack the northern Bahamas on Sunday and likely crash somewhere along the Florida or Georgia coasts around Monday morning.

Because it's four days out, the range of potential landfall spots is vast -- from the Florida Keys to southeast Georgia.

"It has a lot of time in very warm water (to strengthen)," CNN meteorologist Chad Myers said. "Not much shear, not much dry air, and a lot of time to gain strength."

The affected areas in the US will feel tropical-storm force winds -- at least 39 mph -- on Sunday. And the center could pause before it runs into land -- potentially whipping cities with "inches and inches of (rain) an hour," Myers said.

"People have got to be ready before Sunday," Ken Graham, director of the National Hurricane Center, told CNN's "New Day" on Thursday.

Floridians are lining up for gas and food

Officials such as Gov. Ron DeSantis have urged people to have seven days of food and medicine available during hurricane season -- and coastal residents already are stripping store shelves bare with Dorian in mind.

In Port Orange, 40 miles northeast of Orlando, Brooke Koontz found shelves of bread and water nearly empty at a Walmart on Wednesday. There were also slim pickings among canned goods, toiletries and bananas, too.

Thankfully, soon after she arrived, employees brought out a pallet of water.

"It was gone in seconds," she told CNN. "People were trying to race."

Long lines and low supplies were seen at several stores in the Miami area on Wednesday, CNN affiliate WSVN reported.

Plenty of people also were stocking up on fuel Thursday along Florida's Atlantic coast. That included Arthur Sanders, who waited in a long line to get gas in Port St. Lucie.

"They were directing traffic and had part of the parking lot blocked off," Sanders said.

DeSantis declared a state of emergency on Wednesday for 26 counties and urged all residents on the coast to get ready for the storm.

"It's important for Floridians on the East Coast to monitor this storm closely," DeSantis said. "Every Florida resident should have seven days of supplies, including food, water and medicine, and should have a plan in case of disaster."

Georgia Gov. Brian Kemp told residents of his state to keep their eyes on Dorian, too.

"You need to start preparing now if you're in the coastal communities, for sure," he told reporters in Atlanta on Wednesday.

Dorian has cleared the Caribbean Sea, but not before lashing the British and US Virgin Islands -- first as a tropical storm and then as a Category 1 hurricane -- on Wednesday.

Local authorities declared a state of emergency as trees toppled and power lines went down on the islands.

And while the storm was strong, the response was swift. Restoration processes began around 4 p.m. local time in the St. Thomas and St. John districts, and about 25,000 power outages in St. Croix were restored around 7 p.m. local time Wednesday, Virgin Islands Water and Power Authority Director of Communications Jean Greaux told CNN.

"Within an hour of its passage, The Virgin Islands Water and Power Authority mobilized crews to conduct a damage assessment. We immediately commenced restoration of service. Crews are now dispersed addressing isolated or pocket outages in a few locations," Greaux said.

Hurricane advisories have been discontinued for the island, with winds overnight Wednesday dropping below 25 mph and rainfall scattering as the storm moves away, said CNN meteorologist Rob Shackelford.

Puerto Rico, still recovering from Hurricane Maria in 2017, expected the storm to exacerbate the existing damage to infrastructure.

Puerto Rico Gov. Wanda Vázquez Garced on Monday declared a state of emergency for the island and urged people to prepare for the storm. Schools across Puerto Rico were closed Wednesday.

"Thankfully, I've been preparing since May," said Krystle Rivera, whose family has been stocking up on water, canned food and gas in anticipation of the hurricane season.

One man died after falling from the roof of his house while cleaning a drain in preparation for the storm, Puerto Rico Public Safety Secretary Elmer Roman said.

Otherwise, Dorian did not have as devastating an impact on the island as feared.